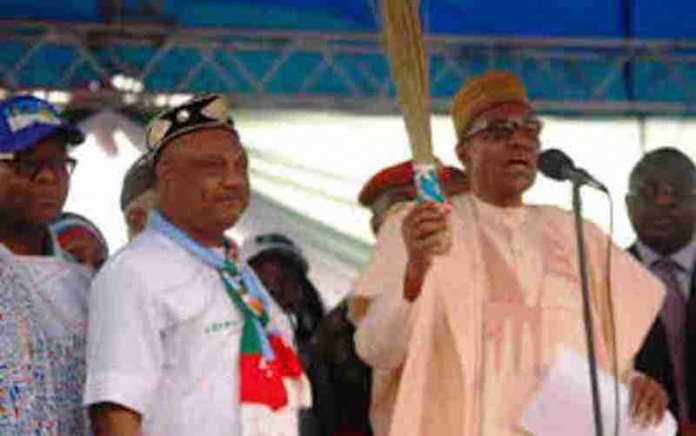 This is as a party chieftain in the state, Chief O’tega Emerho, said there was nothing wrong for the president to visit the state.

He was reacting to the allegation by the Peoples Democratic Party (PDP) that Buhari’s visit to Warri was to perfect the APC’s rigging plans in the state ahead of the March 9 governorship and state House of Assembly election.

However, the state chapter of the PDP has described Buhari’s visit to the oil-rich city of Warri as being in ‘bad taste’, and not in the interest of the overall good of the state.

PDP made the allegation yesterday in a statement signed by the party’s Publicity Secretary, Dr. Michael Osuoza.

On his part, Emerho said the president’s visit was a move in the right direction to strengthen the party structure and reposition it to take over power from the PDP, which he said had been on ground in the state for the past 20 years.

“It is not a crime that the president is in Warri to garner support for the APC; this is election period.

”We are still campaigning, campaigns will end on Thursday and the president has the right to go to places where he feels that people will be excited to see him and support him.

“In 2015, we did not contribute much to electing the president, but this time, we went to town tell the people that he is our president, he has done well and for the first time, we gave him massive support.

“Delta is a tough state, but we gave over 25 per cent of the votes to the president. So, we are very excited that he has been returned for four more years to continue to move the country to the next level.“He has set up a strong foundation, and in the next four years, Nigeria will really progress.

“When you have a PDP in the state for 20 years and they never allowed elections to hold; for the first time, election will hold because the state is tired of PDP and want to join the mainstream APC,” he stated.

Meanwhile, the state’s APC Chairman, Jones Erue, said Buhari was not visiting Warri for partisan politics, but was visiting because of the demands of the people of the state.

Erue said he would not ordinarily respond to PDP’s allegation against the president, because it was an insult for anyone to query his movements; and it was pertinent to set the records straight.

According to him, “Ordinarily, I shouldn’t have responded or reply the state PDP chairman because I have called on him repeatedly that we should have a national debate and talk about issues that affect our state.

“To start attacking the President because he decided to visit a state; is an insult, it is a joke carried too far and that is not politics, it is disrespect.

“He is the President of the Federal Republic of Nigeria and the president-elect; he chooses to visit were he wants to go, it is not the duty of any Nigerian to choose where he should visit.”

At the interval, the state chapter of the PDP yesterday described the visit to the oil-city of Warri by President Buhari as being in ‘bad taste’ and not in the interest of the overall good of the state.

The party warned that Buhari’s visit, the second to Warri in about two months, though apparently intended at intimidating members of the PDP and the people of the state through alleged planned manipulation of INEC and security agencies, would not change the people’s resolve to elect Governor Ifeanyi Okowa again next Saturday.

The state PDP said: “We say this because of the March 9, 2019, governorship and state House of Assembly elections because we have it on good authority that Buhari’s trip is not altruistic, and has nothing to do with the good and progress of the state.

‘’Already, the entire state is abuzz with claims and insinuations, and it is being openly said the president and indeed the whole gamut of well-known election manipulators and hatchet men in the national APC leadership, are visiting Delta State ostensibly to perfect an APC rigging plan and subvert the electoral process as well as the ultimate democratic decisions of Deltans who have sworn to return Okowa for a well-deserved second term and vote for all the PDP candidates in the March 9 state assembly elections.

‘’It is indeed a thing of shame that President Buhari will ignore other very important and urgent state matters to come to Warri to be at the head of a despicable scheme to manipulate and swing votes in favour of the unpopular APC and its candidates.

’We condemn the president’s insensitivity to the sensibilities of the people of the state who have taken PDP as their party. We also decry the shameful, slimy drive of Buhari and his detestable mission to use the power of state to secretly get the various agencies of the federal government to intimidate and harass PDP supporters, voters and subvert their democratic will and foist on the state an unpopular APC and its candidate.

‘’While the foregoing is to seriously inform and educate the public of Delta State, Nigerians and the world at large of the president’s tricks and treacherous game plan being schemed to thwart and by subterfuge subvert the already known will of Deltans who are poised to vote for Okowa and other PDP candidates, we warn that President Buhari must be held responsible for any complications that may develop from his inglorious interference in the voting process in Delta State,” he said.