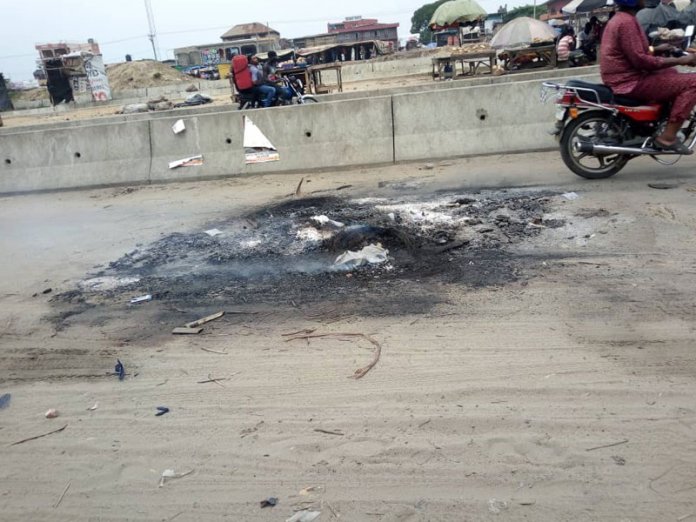 For the umpteenth time in Lagos State, some hoodlums, while celebrating the victory of President Muhammadu Buhari at the polls, Wednesday unleashed mayhem on traders of a particular ethnic group at the Alaba Rago and Lagos Island areas of the state.

On Lagos Island, the hoodlums were said to have descended on Igbo traders, accusing them of not voting for their candidate at the just concluded presidential and National Assembly elections.

The miscreants, who were armed with dangerous weapons like cutlasses, broken bottles, jagged woods and knives, struck at about 9a.m. at Oluwole, Nnamdi Azikwe, Tinubu, Bamgbose and Alli Streets.

Their target were the Igbo traders who were just opening their respective shops for business, as they were beaten after instructing them that all their shops should remain locked for the day.

Whilst the lockdown was going on, the armed hoodlums were chanting ‘Igbos should go back to their states’, ‘leave Lagos alone’, ‘Go and do business in your states, this is Lagos’.

Prior to the arrival of the police to quell the situation, the intimidated traders had closed shop and fled to safety.

Tentative peace was somewhat restored after the Area ‘A’ Commander, Bode Ojajuni, an Assistant Commissioner of Police, deployed policemen in the area.

Similarly, at the Alaba Rago area of Okomaiko, the hoodlums who were armed with cutlasses, sticks and axes, went on rampage, destroying wares belonging to traders.

Chanting the popular ‘Sai Baba’ phrase that is often associated with supporters of the president, the hoodlums, numbering over hundred, marched from Alaba to Okokomaiko, chanting victory songs.

The hitherto peaceful march soon turned ugly when they got to the market at Okokomaiko, as they went berserk, destroying hundreds of shops and wares.

A meat seller who simply gave his name as Tunde told THISDAY that they had barely returned from the abattoir with the meat they bought, when the hoodlums besieged them.

According to him, “Although I don’t have a shop, I have a table where I display my meat. I was in the process of arranging them when I heard people chanting.

“At first I wasn’t worried because I was just hearing ‘Sai Baba’. It was when I noticed that the people were running that I decided to check. Behold, they were scattering people’s wares.

“Many people were injured as they were running. We would have resisted the attack but they were armed with cutlasses and axes. That’s how I left my meat and ran away.

“By the time the army from Ojo cantonment and the police came to restore peace, my meat was on the floor, same with other traders whose wares were also destroyed.”

THISDAY further gathered that the army was called as reinforcement after the rampaging hoodlums overpowered the police and injured some of them.

As at press time, personnel of the Nigerian Army were still on patrol in the area with backing from operatives of the Rapid Response Squad (RRS) and FESTAC Police Division.

Although the police were said to have made some arrests, the residents said they were only scapegoats as the main perpetrators of the act had fled before the army arrived at the scene.

When contacted, the state Police Public Relations Officer, CSP Chike Oti, said at Alaba Rago, 37 persons were arrested in connection with the incident.

He said: “The police were alerted and we deployed operatives there to calm the situation but the hoodlums attacked our men and severely injured one of them. He is currently recuperating at the hospital.

“We have arrested 37 suspects in connection with the rampage. On Lagos Island, however, the police were able to contain the situation before it worsened.”