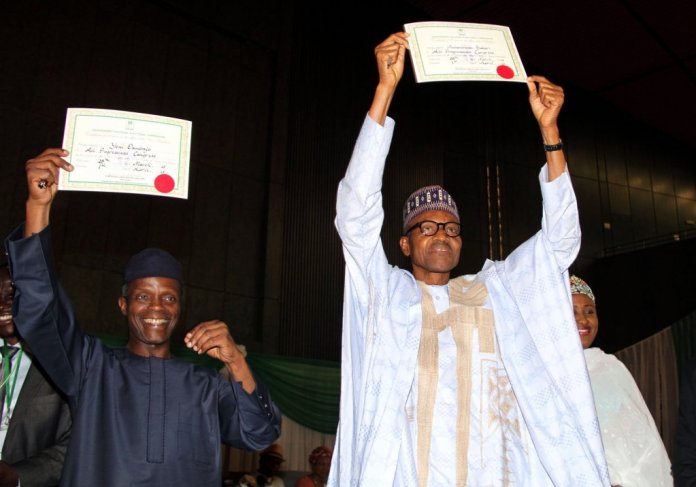 The Independent National Electoral Commission (INEC) on Monday in Abuja presented a Certificate of Return to President Muhammadu Buhari, winner of the Feb. 23 Presidential election.

The certificate was presented to the President by the Returning Officer of the election, who is also the Chairman of INEC, Prof. Mahmood Yakubu.

Yakubu first invited the Vice-President, Prof. Yemi Osinbajo, who in turn invited the President-Elect, Muhammadu Buhari, to sign and collect the Certificate of Return.

INEC had earlier on Wednesday declared President Buhari, candidate of the All Progressives Congress (APC) winner of the 2019 presidential election.

Speaking at the event, the president assured Nigerians that they would soon see “a country moving to the `Next Level’ as the APC-led administration consolidates on its achievements”.

President Buhari also pledged to continue to engage all parties as his administration would be operating an open government for the general progress of the country.

He, however, vowed to continue the fight against corruption, saying accumulation of public wealth would not be tolerated.

The president, who thanked God for the electoral victory, also reiterated his call on all APC supporters not to gloat or humiliate the opposition, saying “victory is enough reward for your efforts”.

Others were the Director-General, National Intelligence Agency (NIA), Amb. Ahmed Rufa’I, presidential aides and political appointees as well as the chairman of the APC, Adams Oshiomhole.

The National Leader of the APC, Asiwaju Bola Tinubu, and family members of both the President and the Vice-President also witnessed the event.(NAN)