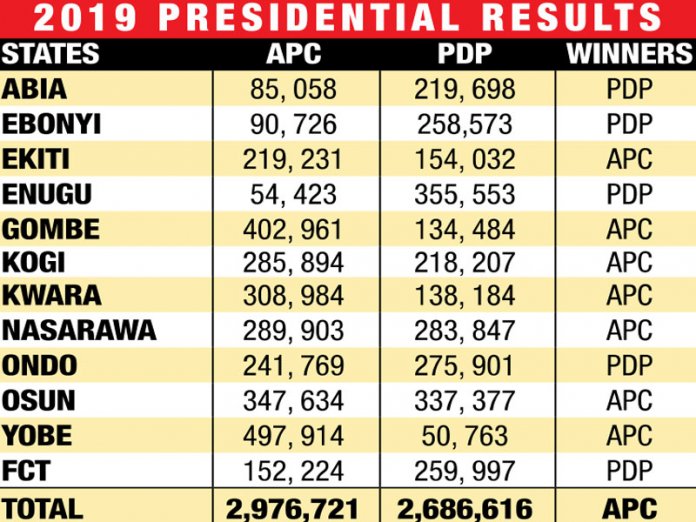 The Peoples Democratic Party (PDP) yesterday alerted the world that Nigeria’s democracy was under serious threat and rejected the results of last Saturday’s presidential and the National Assembly elections being announced by the Independent National Electoral Commission (INEC).

The PDP National Chairman, Prince Uche Secondus, made the declaration against the background of alleged collaboration between the electoral body and the ruling All Progressives Congress (APC) to change the original results from some polling units in order to diminish the lead his party has recorded in some parts of the country.
The party’s position was made known shortly after INEC National Chairman, Prof. Mahmood Yakubu, began to announce the official results of the presidential election in Abuja.

The results announced so far saw the PDP’s Alhaji Atiku Abubakar trailing President Muhammadu Buhari, the candidate of the APC.
At press time, Buhari had won seven of the 11 states and FCT declared by INEC. He won in Kwara, Kogi, Nasarawa, Gombe, Ekiti, Osun and Yobe States.
Atiku picked up majority votes in Abia, Ondo, Enugu and Ebonyi States as well as FCT.
But as unofficial results emerged in the remaining 25 states, indicating a loss for Atiku, the PDP complained yesterday, saying it would not accept the results.
At the end of proceedings this morning, Buhari had polled 2,976,721 votes to Atiku’s 2,686,616, leaving a 290,105 margin of win in favour of the president.

The collation of results from the remaining 25 states, according to Yakubu, would continue this morning.
Secondus, who read from a prepared text titled: “Our Democracy is Under Threat,” said the PDP is forced to take a stand and make the pronouncements it made at this crucial point because “Nigeria’s democracy is under threat of derailment.”

He said: “Our collation centers have all original results from every polling unit, in every ward, in every local government area (LGA) in Nigeria, of which the international community is well aware, implying all results currently being announced by the Independent National Electoral Commission (INEC) is incorrect, thus unacceptable to our party and people.

“Secondly, officials of both President Buhari’s government and the All Progressives Congress (APC), working with INEC officers, have tried to alter the course of history and disenfranchise our people through the cancellation and manipulation of figures for results already announced at polling units, nationwide, in Local Government Areas (LGAs) where our party, the PDP, had commanding votes; this must now be resisted by every well-meaning Nigerian.

“Thirdly, the ruling party’s strategy has indeed been murderous, undignified, and disrespectful of the wishes of the electorate, our people and the international community, who have been in solidarity with our nation as we attempt to strengthen our democracy and its institutions.”

“Fourthly, the main opposition party said in full view of the watching world, and despite efforts by PDP and its agents to adhere to every laid down provision for the 2019 general elections, the APC in collusion with INEC have taken aggressive steps, mostly through inducements, manipulation and incarcerations, using the elements of state power, including the Nigeria Police Force, the Nigerian Army in particular, alongside other organizations, including the Department of State Security (DSS) and Economic and Financial Crimes Commission (EFCC) to silence the voices of the long suffering people.”

Describing this as disheartening, it added that considering the terms of the Peace Accord, which called for impartiality and non-partisanship by members of the security organizations with constitutional roles to play during this civic exercise, the security agencies did otherwise.
PDP said that as results trickled in on Sunday, it clearly put the PDP in the lead, which forced the ruling party and President Buhari to dispatch high-ranking officials to coercively influence outcomes in different geopolitical zones in the country.

“With the INEC IT server hacked by agents of the APC to manipulate results, we can with certainty state that results from the following polling units have, for example, been tampered with: Sarkin Dawaki ward in Doma LGA – Nassarawa State; Doka ward in Doma LGA – Nassarawa State; Agyaragin – Tofa ward and 10,000 illegal votes allegedly added to already announced results in Wurno LGA in Sokoto State.”

The PDP chairman noted that the party’s complaint is only restricted to areas where it had already identified sharp practices, promising to continually update Nigerians on development through the media.
It stated that the violent and destructive attacks meted out to officials while counting at Lafia Street and police barracks polling units had negatively impacted and militarised the process.

According to Secondus, “As if these provocations are not enough, our agents and officials are constantly arrested and in many cases locked-up for complaining that card readers were not in use in many Northern states, implying that all results from the Northern part of the country where card readers were not used should be voided in accordance with INEC guidelines.”

On the arrest of Mr. Buba Galadima, who he said had been a great symbol of what is courageous about their people, he said it goes to show that “one man’s ambition is greater than our collective good, and most probably worth the blood of all Nigerians.”
He demanded for Galadima’s immediate and unconditional release, as well as that of all officials and agents of the PDP, in the South-west, who were mostly arrested on the eve of the elections.

“Despite these provocations, intimidation and attempts to hijack our democracy and change the course of history, I must, in fact, convey to our good people the fact that the PDP is on course to victory and the Presidency.
“Therefore, remain resolute and steadfast, because our party shares in your uncertainty and suffering, which must decisively come to a good end for us all,” Secondus noted.

While appealing to the leadership of INEC to remain impartial and not become willing agents to disenfranchise the people and derail the nation’s democracy, because the world is watching, and history will indeed pass judgment, he said to the international community that “we welcome your support for our democracy and extend our gratitude with great hope for our democracy.”

APC: Your Position is Premature

Responding swiftly last night, the Director of Strategic Communications of the APC Presidential Campaign Council, Mr. Festus Keyamo SAN, said the PDP’s reaction was premature and urged it to await the full results to be announced by INEC.
Praising INEC, he said: “Overall and from reports received in the Situation Room of the Election Planning and Monitoring Directorate of the All Progressives Congress from across our country, at this point it is safe to conclude that the Independent National Electoral Commission (INEC) has done a good job despite the challenges and the delays experienced in some cases. With over 84 million Permanent Voters Cards (71 million collected), mobilising the citizenry to exercise their democratic right to vote has been a massive undertaking but, thankfully, it was conducted largely peacefully and on schedule.”

The APC campaign council said despite the “unjustifiable” stance of the PDP, it is confident “the results by INEC are free and fair.”
“Our elections have progressed over the years and we ask that the PDP do not derail us to the dark past with its childish antics,” he added.
“The announcements by INEC which has gotten underway will be concluded in due course. Let us all be patient and let this credible process take its course.”

President Returns to Abuja, Says I will Wait for Announcement of Results by INEC

Meanwhile the president yesterday afternoon returned to Abuja from his Daura country home, 48 hours after the conduct of the presidential election.
Buhari, who arrived Abuja before 12 noon, told journalists that he would not be bothered by rumours on the results of last Saturday’s presidential election, saying he would rather wait for the final announcement of results by the Independent National Electoral Commission (INEC).

“I don’t want to depend on rumours, but we will rather wait for INEC to announce the results,” he said.
Asked about his message to Nigerians this season, Buhari said he expected citizens to appreciate that the federal government provided them with security and peaceful atmosphere to cast their votes.
“Well, l hope that Nigerians will appreciate that it was this government which made sure that they were allowed in security and peace to cast their votes for whichever party and candidates they wanted,” he added.