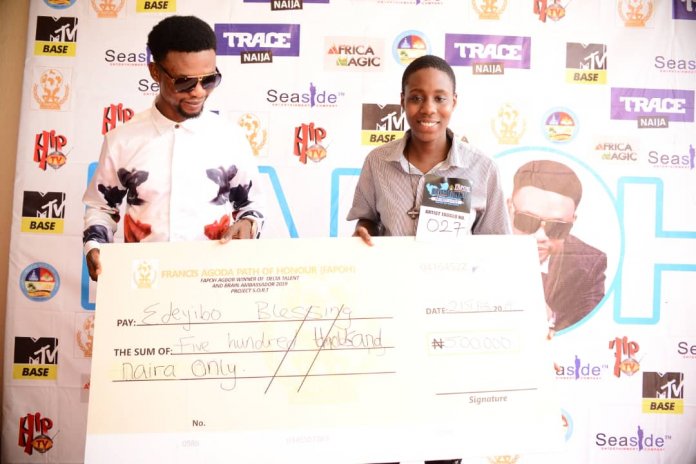 Blessing Edeyigbo, a budding musician of extraordinary talent has emerged second in the ongoing ‘I Go Dye’ Delta talent hunt project’ in Agbor, Delta State and was rewarded with a prize sum of 500 thousand naira.

The event which held at the Royal Court Yard B on February 21, 2019, saw Blessing outclassing other participants at a  keenly contested challenge which was witnessed by thousands of youths from the city.

Blessing’s prowess as a singer coupled with her eclectic performance wowed the judges made up of music act, Faze, music producer, Nas T, OAP Monique, Maleke and comedian Ghana Must Go, to clinch the crown as the winner of the Agbor edition of ‘Sorting Out Raw Talents’ (SORT) competition.

The SORT project, which was conceived and executed by Francis Agoda, popularly known as ‘I Go Dye’, is part of the comedian’s Francis Agoda Path of Honour (FAPOH) initiative, designed to identify and reward excellence in various fields of human endeavours.

The Delta Talent Hunt aspect of the ‘SORT’ project commenced on February 13, 2019 in Warri, with Mr Douglas walking away with 500 thousand naira as the winner.

According to the comedian whose commitment to world peace and youth empowerment has become public knowledge, the big idea behind ‘SORT’ is to help government checkmate the issue of youth restiveness in the country, occasioned by lack of availability of enough jobs to engage the youths.

Speaking on the ‘Sorting Out Raw Talents’ project, I Go Dye said, “Obviously at this point of our existence, selfless contributions that will create alternatives to engage the youths should be encouraged. We cannot continue to leave the responsibility of supporting the youths in the hands of government alone.

“In the past, programs like West Africa Idol, Project Fame and others have really helped our talented youths in Nigeria, making the winners who they are today. So, this requires the support of us all, because its objectives are aimed at eradicating youth restiveness, making them to become more resourceful and productive and we have the support of Delta State Government.

“We are looking at taking it across Niger Delta before we do SORT NINJA. Like they say, charity begins at home, that his why we are lunching this project SORT today in Delta State.” While adding that the project would be concentrating on peace and talent development through FAPOH with #igodyeprojectsort ‘Sorting Out Raw Talents’ which is ongoing and would assist to discover talented youths and reward them according to their overall performance.

He further stated that, “I appreciate every one that has been supportive and following the proceedings of the I Go Dye project ‘SORT’. We sincerely appreciate your thoughtfulness and goodwill towards us, inspiring the youths and adding your time, wishes and prayers to motivate and encourage our youths. We cannot wait for government alone to build our local communities, collectively we all can develop and bring lasting peace against youth restiveness and other forms of anti social vices.

“Be the voice and hope that will make someone smile now and in the future. The commitment to derive considerable peace is sacrosanct. Governor Ifeanyi Okowa of Delta State has supported this project because it will improve the human capital development of the youths and promote self resourcefulness. Asaba is next, we are closer to the grand finale.”

The grand finale is set to hold in Asaba on March 5, 2019, where the first winner of Warri and the second winner of Agbor will be part of the final showdown. The winner who will be crowned Delta Talent and Brain Ambassador will also walk away with 2019 Hyundai Accent sedan car.