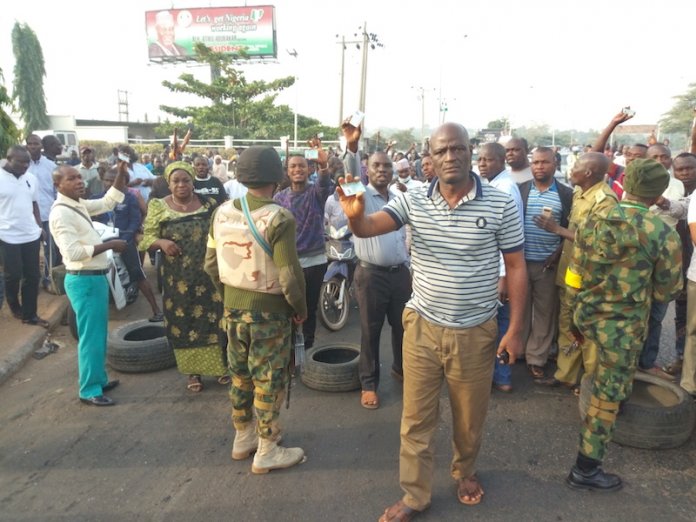 There was a mild drama at the Stadium Roundabout, Kaduna, when soldiers attempted to stop people from accessing their polling units.

The soldiers had prevented residents of the southern part of Kaduna metropolis whose polling units are in various places at the city centre.

The soldiers, who mounted a road block at the roundabout, had stopped people from driving to the city centre, where their polling units are located, saying that they had orders from above not to allow any movement.

Displaying their permanent voter cards (PVCs), the stranded voters who started chanting “Buhari Must Go” insisted that nobody will stop them from accessing their polling units.

The soldiers also attempted to seize mobile phones from journalists who were taking pictures of the incident, but the journalists stood their ground, insisting that they were performing their constitutional duties like the soldiers as well.

The intervention of a senior army officer avert the situation which would have been chaotic. The officer ordered that all those with their PVCs should be allowed to pass. 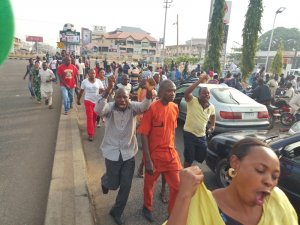 Residents of Kaduna south, protesting against being prevented by soldiers from accessing their polling units in Kaduna metropolis.

editor - August 13, 2020 2:00 am
3
The Verdict By Olusegun Adeniyi, Email: olusegun.adeniyi@thisdaylive.com   It is a measure of the collective amnesia that defines our country that Nigerians are hardly paying attention...

I Will Never Work with Tinubu