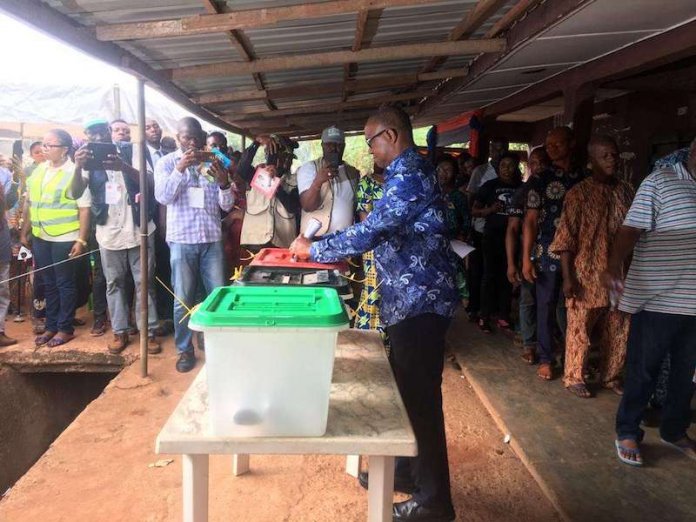 The vice-presidential candidate of the Peoples Democratic Party (PDP), Mr Peter Obi, and his wife Margaret have cast their votes in the presidential and National Assembly elections.

Obi cast his vote at exactly 8:55am at his Amatutu Village polling unit, Agulu ward 2, in Anaocha Local Government area of Anambra State.

Speaking to journalists after casting his ballot, Obi said it was too early to confirm that the process was going smoothly, but promised to confirm so later in the day after reaching out to voters in other parts of the country.

Obi however revealed that security agents Friday night went after some known PDP stalwarts in the state.

He told journalists that he was also harassed by security agents but refused to say more about it.

“The answer to your question is capital yes. Most of our members, including myself were harassed by security agents last night,” Obi said.

When prodded further, Obi said: “I cannot speak further than this, but you just heard me say yes. The answer to that question is yes, I was also harassed.”

THISDAY gathered that some PDP stalwarts in Anambra had been arrested late Friday night by security agents.

Some of those said to have been visited include Mr Joe Martin Uzodike, a known ally of Peter Obi, and another, Jeff Ezeukwu in Alor community of Anambra State, the hometown of the Minister of Labour and employment, Dr Chris Ngige.