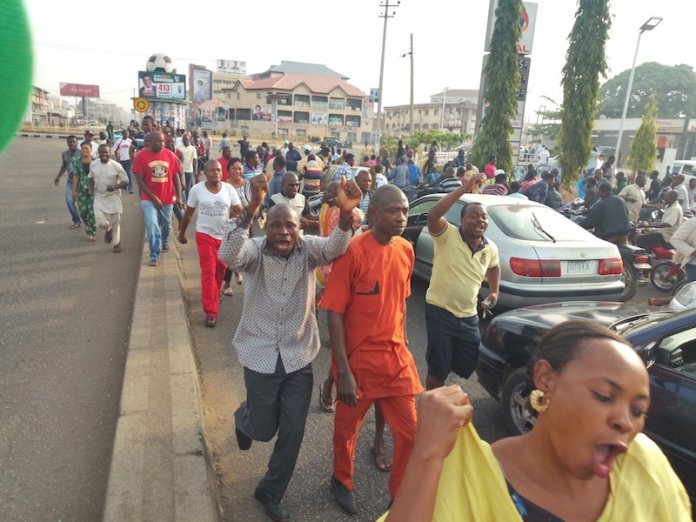 The voter turnout in Kano Saturday was massive, as thousands of workmen in large numbers came out and cast their votes in various polling units across the state.

It was also learnt that majority of the women cast their votes in favour of candidates of their choice, while majority of them voted for President Muhammad Buhari because of the social intervention assistance offered to them.

Ganduje disclosed this after casting his vote at Ganduje Cikin ward, Dawakin Tofa Local Government, and expressed delight over the timely arrival of INEC officials and election materials.

According to Ganduje, the new cast-vote-and-go system adopted by the electoral body has reduced congestion at polling stations, noting that, that would reduce the election violence to the minimum level.

“As the governor of Kano State under the platform of APC, I use this opportunity to call on all and sundry to vote for APC at all elective positions.

“I am very happy with the way INEC prepared this election in orderly and peaceful manner. This is commendable. The system also adopted by the INEC, which allows a voter to leave the place as soon as he or she casts vote has indeed reduced congestion and violence to the barest minimum,” said Ganduje

The governor, who is vying for re-election, also called on losers to accept defeat, noting that politics is not a do-or-die affair as they would have another four years to try their luck.

Ganduje, alongside his wife, Hafsat Ganduje, cast their votes at Polling Unit 008, around 10:30 am.

The Emir of Kano Muhammad Sanusi II voted at about 9:45am with a call on the electorate to come out en mass and cast their votes and also commended INEC for a job well done.

As at 9:230am INEC officials were yet to be seen at the station while angry voters alleged that the late arrivals could be a deliberate attempt to deny them their voting rights.

One of the voters, Malam Sani Ismaila, 60, told newsmen that: “We have been here since 6:30 am and this is 9:30 and we are yet to see any INEC staff. As you can see, we are here sitting down waiting for their arrival despite the postponement of the election with one week.”

At Kawaji Jigirya ward at Nasarawa Local Government Area, there was massive turnout of voters as most of them have started casting their votes.

Also at Gidan Dan Hausa polling station, as early as 8am voters were seen casting their votes.