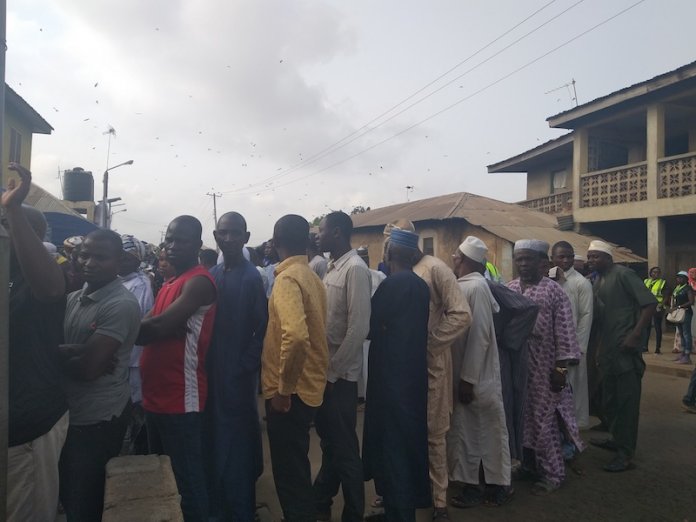 By Vanessa Obioha and Hameed Shittu in Kwara state

At the traditional homestead of the Senate President Bukola Saraki, Agbaji, Kwara State, a great number of citizens arrived early to cast their votes but there were no INEC officials on ground.

As at 8:50 am, election materials were yet to arrive the venue. With the absence of the officials at the Ode-Opobiyi polling unit, Ajikobi Ward in Ilorin West, the motley crowd of women, men and youths engage in discussions while some roam the narrow street.

There is also the presence of military men and heavily armed police officials carrying out checks along the road.

One of the voters, an elderly woman who refused to disclose her name, said she has been at the polling unit since 6:30 am.

“No matter the time, we will still wait for the INEC official to arrive because we are here to vote,” she said.

A member of Saraki’s family, Thonope Saraki, said he has been at the polling unit since 7am.

“Some people have been here since 6:30am. It is quite discouraging that the INEC officials are not yet here. It shows the unpreparedness of the electoral umpire,” he said.

By the time the INEC officials finally arrived at 9:06am, the voters struggled to form a queue so as to do accreditation and cast their vote.