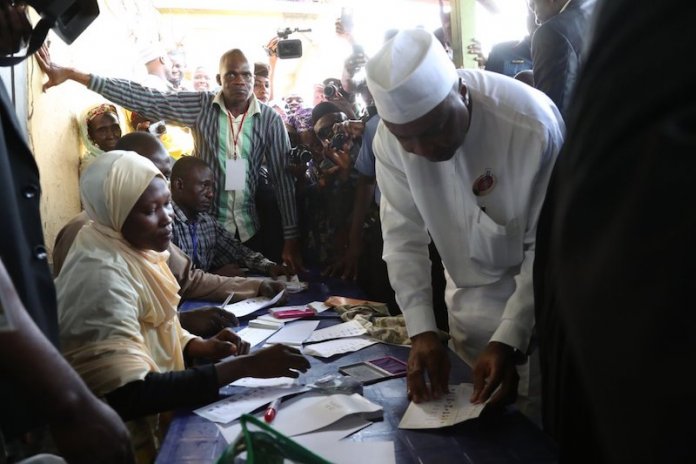 By Vanessa Obioha and Hameed Shittu

Amidst fanfare, the Senate President Bukola Saraki arrived his polling unit 005 in Ode-Opobiyi, Ajikobi Ward Ilorin West, Kwara State to cast his vote around 10am.

A large group of supporters besieged him despite the heavy presence of Directorate of Security Services (DSS) agents and military officers.

The No.3 citizen in company with his mother Florence, his wife Toyin and son Seeni made his way to the polling booth as supporters surged at him.

At 10.20 a.m, Saraki voted alongside his wife amidst shouting “Oloye, Oloye, Oni subu (You will not fall down)”.

Speaking with journalists at his polling unit 005, Saraki who expressed satisfaction with the large turnout of the voters, berated INEC over the late arrival of election officers and electoral materials to the polling unit.

“I want to tell you that you should not allow the development to stop you from coming out. I want to call on you to come out enmasse to cast your votes so as to advance the growth of the community and Nigeria in general,” he told the voters who swarmed him.