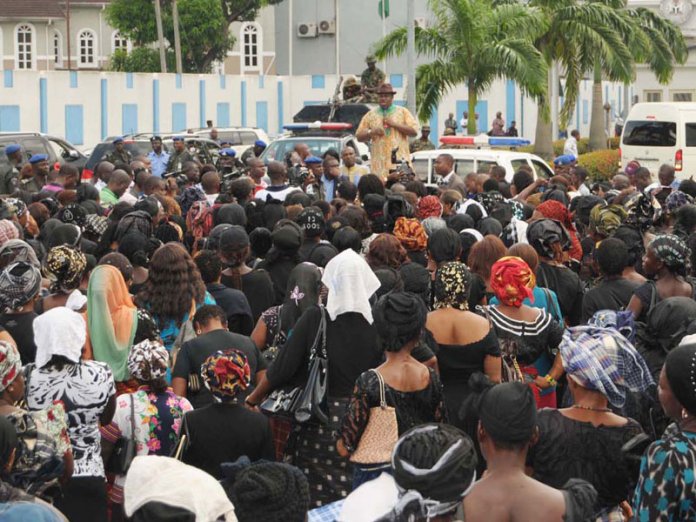 Barely two days to the presidential and National Assembly elections, women in Rivers State have raised the alarm over the influx of the military and police into communities in the state, causing intimidation and violence among the people.

Addressing a press conference in Port Harcourt wednesday, the women, under the aegis of Rivers PDP Women, said their rights were being violated by the military and the police.

Coordinator of Rivers PDP Women and Rivers State Commissioner for Women Affairs, Mrs. Ukel Oyaghiri, in the statement titled: ‘Rivers PDP Women Say No to Military and Police Violence and Intimidation,’ lamented that in the face of public threats by chieftains of the All Progressives Congress (APC), security agencies that are supposed to defend the people have decided to turn deaf ears.

She said evidence abound that the rights of Rivers people would be infringed upon by security agencies during the elections.

She also expressed concern about the hate speeches from chieftains of the APC in the state, adding that neither the presidency nor security agencies have called them to order.

Her words: “We are women, sisters, wives and mothers of Rivers State, fully conscious of our rights to elect our leaders in free, fair and credible general election, devoid of violence and intimidation.

“Evidence abound that our rights are being infringed upon by the military and other security agencies. Threats are made publicly by APC chieftains. Yet, security agencies and the federal government that swore to defend us, turn deaf ears to the impunity displayed brazenly.

“On January 23, 2019, some leaders of the APC in Rivers State addressed a world press conference wherein they issued a direct and specific public threat to the effect that, ‘there will be no National Assembly, governorship and State House of Assembly elections in Rivers State’”.

She also stated that the people witnessed a concerted effort by the military to intimidate citizens in the State by deploying full military arsenal to prevent citizens from accessing their homes, polling units and collation centres. “Without any prior announcements some of us were barred from entering our communities 12 hours before the set time for movement restriction,” she said.

Oyaghiri also expressed concern over the statement by President Muhammadu Buhari authorising security personnel to shoot at sight anyone involved in ballot snatching, stating that it could lead to extra-judicial killing of political opponents.

She added: “It is a well-known historical fact that in every situation of violence, women, young persons and children bear the brunt because they become widows and orphans. Why should there be so much threat because we want to exercise our civic responsibility to cast our votes and ensure that it counts”?

The women urged President Buhari to order the withdrawal of military men from their communities, including the vacation of private houses they had allegedly illegally occupied, especially the property of the Chairman of the PDP Campaign Council in Abonema, Chief Ferdinand Alabraba.

They also demanded that the federal government should guarantee Rivers people free access to their polling units, and that the international community, election observers and well-meaning Nigerians should note the hate speeches made by APC chieftains.

In his reaction, the Deputy Director, Army Public Relations, 6 Division, Colonel Aminu Iliyasu, said there was no truth in the allegations against the military.

He advised members of the public to go out and exercise their franchise as the military will discharge its duties as contained in the relevant laws of the land.