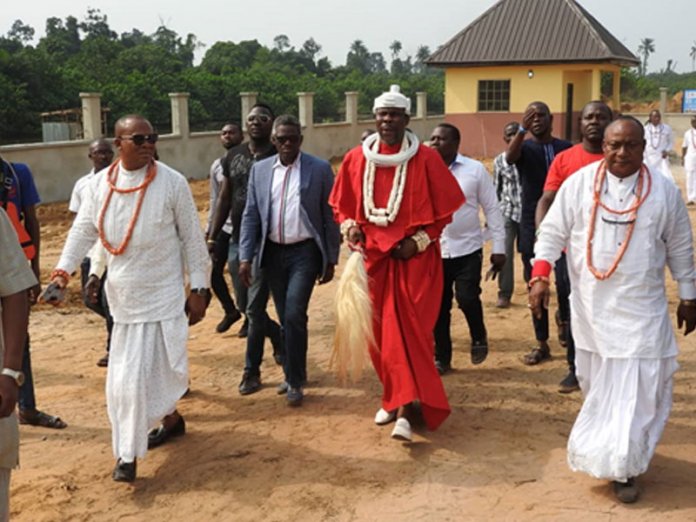 With the commissioning of healthcare facilities in the hard-to-reach riverine areas of Delta State -Egbema and Gbaramatu communities- there seems to be a new lease of life for the residents. Martins Ifijeh who experienced the handing over and enrollment of 70,000 residents into the state’s healthcare contributory scheme, reports

Journeys to hard-to-reach riverine communities are no mere jokes. They invoke mixed feelings. For first timers on a speed boat, it could signal journeys of no return in their subconscious, especially when the commuters do not know how to swim. For others, there’s no better fun than cruising at the middle of the Atlantic Ocean with high rise waves caressing the fast moving boats.

This was the case when a team from the Delta State Contributory Health Commission (DSCHC), PharmAccess Foundation, Toronto Hospital and a medical team from the United States went on a three hours boat ride from Warri to Egbema community in a bid to commission a cottage healthcare facilities, and have every member of the community enrolled in the state’s contributory health scheme.

Egbema community is a home to 40,000 Deltans who for several decades did not enjoy basic healthcare and other developments they are entitled to. Their pregnant women and under five children lived at the mercy of traditional birth attendants, herbs and their immune systems. They had resigned to fate, believing their location as a riverine community was part of their biggest undoing.

But as a people determined to enjoy basic healthcare, they had commenced contributions among themselves to build a befitting healthcare facility. Some of those who spearheaded the contributions unfortunately have gone to the world beyond, as the delay in raising the funds lingered on from decade to decade.

However, with the help of the Egbema Gbaramatu Communities Development Foundation (EGCDF) and Chevron Nigeria Limited, the facility was built with several hundreds of millions of naira; a gesture that didn’t complete the wishes of the people as the hospital was never operational for years despite completion.

Eked by this, the Director General and Chief Executive Officer, DSCHC, Dr. Ben Nkechika, along with his team embarked on the trip to get the facility running, and consequently get members of the community enrolled in the state’s mandatory health scheme, such that any resident of Egbema community could walk into the facility, receive quality care without paying out of pocket for the treatment.

“I took this as a very special project, after the king of Egbema community, HRM, Sir Gold Oro, told me in a meeting that he was almost 90 years, and his dream of having a functional health facility has not become reality. I took this as a challenge,” says Dr. Nkechika during the commissioning of the cottage hospital.
He said after initially inspecting the facility, which had been overtaken by weeds and trees, he approached Governor Ifeanyi Okowa who gracefully approved the commission to take over the running of the hospital through the state’s contributory health scheme.

“Kicking off, we had a discussion with PharmAccess and Bank of Industry, and we came up with the ‘Access to Finance Programme. Taking over this cottage hospital will therefore mean it will be run by a private healthcare facility, Toronto Hospital. All pregnant women, children of under five years and senior citizens above 65 years of age will enjoy automatic health insurance, while other members of the community will also enjoy same upon registration for a premium of N7,000 for a whole year,” Nkechika said, adding that members who were unable to pay for enrollment will also not be disenfranchised from benefitting, as the state’s equity fund covers for the poor.

Sharing his thoughts, the King of Egbema community said for several decades his people lacked many necessities, one of which was primary healthcare, adding that this, in no small measure, has led to a reduced life expectancy in the community.

“I am therefore overwhelmed with joy that our age-long desire has come to fulfillment today through the efforts of EGCDF and Chevron. I am most grateful to Delta State governor for taking over the running of this hospital through the health insurance scheme.” He however used the opportunity to call on the government to provide potable water and electricity to all major communities under his kingdom.

Okowa, who was represented by his Chief of Staff, Tam Brisibe, said his government would continue to lend support to the good people of Egbema community and other riverine communities, emphasising that all Deltans, irrespective of location, deserve the dividends of democracy.

While the community rolled out its drums and orchestras to celebrate the new development in their communities, the DSCHC immediately commenced registration of residents as enrollees into the state mandatory health contributory scheme.

The team, afterwards embarked on another one hour 30 minutes boat ride to Gbaramatu Kingdom, a beautiful, peaceful and heartwarming community where the DSCHC had also taken over the running of a cottage hospital built and abandoned previously.

Its king, HRM Oboro Gbaraun II Aketekpe (Agadagba), said after the cottage hospital was built by EGCDF, with support from Chevron, running it became the issue, but that with the commissioning and promise to run the facility by the Delta State government, he was optimistic that health challenges presently experienced in the community will be a thing of the past. He called on Chevron, and the state government to bring in more developments to the kingdom.

Nkechika, who emphasised on the need for the residents of Gbaramatu kingdom to be enrolled into the state’s contributory health scheme, said the over 30,000 residents in Oporoza area of Gbaramatu would benefit from the health scheme, noting that pregnant women, children under five and the elderly above 65 years will enjoy free healthcare in the kingdom under the contributory scheme.

He said: “I have spoken to my team; we will commence registration of enrollees in the kingdom immediately. Every resident here deserves access to qualitative healthcare irrespective of status or economic strength.”

He also noted that the medical team from the United States will lend their support in the area of preventive care, as well as other medical support, noting that the care to be provided to the Egbema and the Gbaramatu communities will be synonymous with what obtains in the developed world, including the United States where the medical team came from.

Nkechika, whose health insurance scheme presently has the largest number of enrollees in any mandatory scheme in the country with about 500, 000 enrollees as at January this year, said Senator Okowa has given a marching order that the obligation rendered to Egbema and Gbaramatu communities be extended to all riverine communities in Delta State.

Nkechika, who started his career with the exploration arm of Schlumberger, is a Harvard University and London School of Economics trained health specialist, with bias for development of rural healthcare.

Going down memory lane on how the state started its scheme, he said while doing his course at Harvard, he was asked to do a project on Healthcare in Africa, using the Rwandan model because they felt at the time that there was nothing good in Nigeria’s health sector. But that he met Senator Okowa who at the time was the chairman, senate committee on health.

“He then gave me a document, the National Health Act to read. I saw a fantastic document and I went back to Harvard and presented the Future of Healthcare in Nigeria. I didn’t go to Rwanda anymore. When I came back from Harvard, Okowa had signified interest in running for governor. He assembled about five us and we started developing the Delta State universal healthcare coverage template.

“Three months after he became governor, the bill was signed into law. At that point, I took my bag and headed back to Abuja to continue my private business since we had achieved the aim of having it as a law. But the governor sent for me and said I needed to run it. I knew how passionate universal health coverage meant to him, so I accepted and here we are,” he said.

On how he got 500, 000 residents to enroll in the scheme even when many states are still struggling with setting up their scheme, he said those registered were real people who were already enjoying the benefits attached to the scheme.

“We kicked off January 1, 2017 with pregnant women and children of under-five. Any of these categories that walk into any health facility is registered. Those without photographs will have their photos taken by the hospital, while their real addresses and other personal details are taken because everyone must have an identity. Every booklet has a unique number that becomes the person’s unique identification.

“The state has 47,000 civil servants, so we took their records from the biometric registration after due consultations with their various unions. They all registered from day one because it is mandatory. After that, every civil servant was encouraged to bring their spouse and children for registration.”

He said in addition to this, the state was already running a free maternal programme only in secondary healthcare facilities, but that the commission then brought on board 107 primary healthcare centers, each of which became registration points.

He said to show its seriousness, the state has so far paid about N800 million as medical bills since 2017, stressing that the state couldn’t have paid imaginary bills. “We are paying for real life cases. We are not just marching data.

“We started from ground zero and within six months we hit a 100,000. We hit 250 within the next couple of months. For ever milestone we make, we let the world know. When we got to 350 we did another press conference.
“Between September to December 2918, we jumped from 350 to 480,000. The remaining 20, 000 that made it 500, 000 enrollees were the ones that couldn’t go automatically into the ICT platform, so they were downloaded directly in the centres where these registrations took place.”

He said the commission’s plan was to hit one million enrollees on or before December 2019.

An Associate Prof of Medicine, Atlantic More House, School of Medicine, Atlanta, Dr. Nkechi Mbaezue, said with the provision of the basic healthcare to residents of the state, not only will their health improve, their income, as well as that of their families and the state’s economy will also improve.

Mbaezue, who is a member of the medical team on a free mission to the state, said they would give the state government the needed support in ensuring all Deltans enjoy qualitative, accessible and affordable healthcare.