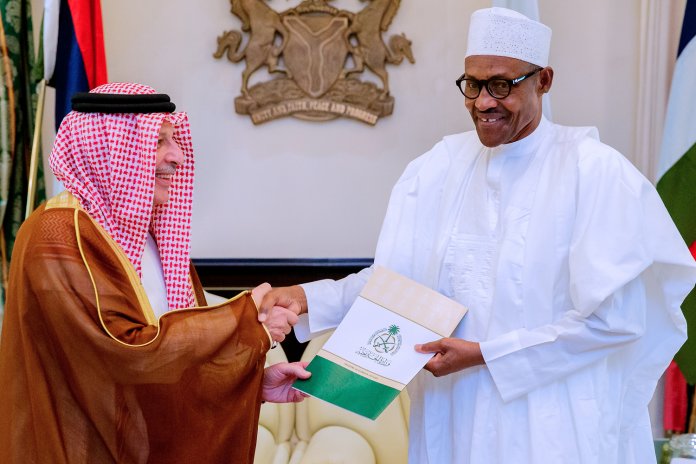 President Muhammadu Buhari Wednesday in Abuja pledged Nigeria’s cooperation towards the on-going efforts to reduce oil output with a view to attracting higher prices in the global market.

The president, according to a statement by his Senior Special Assistant to the President on Media and Publicity, Malam Garba Shehu, the president made the remark in the State House, while hosting Ahmad Qattan, Special Envoy of King Salman Bin Abdulaziz, Custodian of the Two Holy Mosques and Minister of State for African Affairs of the Kingdom of Saudi Arabia.

According to the statement, Buhari said as a responsible member of the Organisation of Petroleum Exporting Countries (OPEC), Nigeria was willing to go along with the Saudi initiative in limiting output so that prices would go up.

The statement also said Buhari observed that output cuts had always been difficult for Nigeria, considering the country’s peculiar circumstances of large population, huge expanse of land and state of under-development, adding, “I wish we can produce more.”

Shehu quoted him as saying, “I have listened carefully to the message. I will speak with the Minister of State (Petroleum). I will call for the latest production figures. I know that it is in our interest to listen. We will cooperate.”

He added that Buhari explained that higher oil prices would make both nations stronger and their citizens more prosperous as he commended King Salman for what he described as his leadership in global oil matters, with assurance that Nigeria will continue to accord respect to the Kingdom in that regard.

“The Special Envoy said he had brought special greetings from King Salman and the Crown Prince, and expressed their best wishes for Nigeria as the country goes into general elections.

“Mr Qattan said the important reason for which King Salman sent him was to make a request to President Buhari to ensure Nigeria’s compliance with quotas assigned in January by exiting previous exemption from output cuts.

“He said his country had reduced its own output by 1.4 million barrels per day to ensure that prices went up, stressing however, that Saudi Arabia alone cannot bring stability to the oil market and shore up prices.

“The Special Envoy called for greater adherence to production cuts by Nigeria and hoped that he would take a positive message back home,” the statement added.