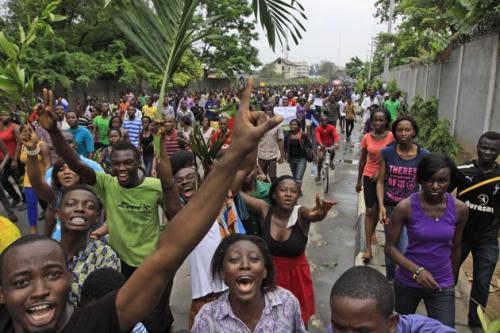 •  My life in danger, deputy gov cries out

The protest by Ihima women against the renewed political violence in Ebiraland by the All Progressives Congress (APC) in Kogi State has claimed two lives while several houses were burnt.

The women have called on Governor Yahaya Bello to order his appointees to retrieve guns distributed to their sons.

This is coming as the state Deputy Governor, Chief Simon Achuba, has cried out over alleged threats to his life, following the alleged withdrawal of his security details by the state Commissioner of Police, Busari Hakeem.

The protest, which started on Saturday and lasted for four hours, saw the aggrieved women visiting the house of political leaders in the land, to warn them to return the guns they distributed to their sons to kill themselves and cause confusion in the land.

The women alleged that OKehi Local Government Administrator, Abdulraheem Ohiare, and the state Commissioner for Water Resources, Salami Ozigi,were responsible for the political crises that had claimed the lives of two people, with more than 30 injured and 15 houses burnt in Obeiba axis of Ihima, OKehi LGA.

The women threatened to continue the protest until the political leaders retrieve the guns distributed to their children.

Speaking on behalf of the women, Hajia Abisetu, said they cannot sit anymore and watch what has been happening in the last two months to continue, adding that they will continue their protest until Governor Bello orders his appointees to retrieve the guns distributed to their sons to kill themselves and cause confusion in Ihima.

She said, “We took it upon ourselves to save our land; we went round Ihima yesterday and visited the houses of all the political leaders sponsoring and distributing guns to our sons; we warned them to retrieve their guns from our children for us to have peace in Ihima.

“Instead of doing the needful, OKehi LG Administrator, Ohiare, went and held meeting to sponsor some women from his own place in Eyika to stage another protest here in Ihima in support of his evil.

“This is why we are out again because the administrator is not ready to change and give us peace in our own land,” she alleged.

In another development, the Social Democratic Party, (SDP),  in the state has raised the alarm over an alleged move by the Kogi State Government and the APC in the state to use the Nigeria Police to rig the forthcoming elections particularly in Kogi Central.

In a statement issued yesterday by the state Acting Chairman of the party, Alhaji Mouktar Atimah, the party alleged that huge sums of money was given to the police earlier deployed to Kogi Central, before the postponement of the elections by INEC to motivate them to give cover to APC thugs to snatch election materials and perpetuate other electoral violence.

“We also call on all relevant agencies to watch out for this. Money that ordinarily would have been used to pay backlog of salaries or invested in the provision of critical infrastructure is being wasted.

“We call on our members and supporters not to lose hope as a result of the postponement,” the party said .

But reacting to the development, the state Police Command said its men deployed for the election were trained on their rules of engagement.

The Police Public Relations Officer, (PPRO),  William Aya, said no officer would take side with any politician, adding that the consequences of such actions are well spelt out in the rules of engagement.

He assured all the political actors in the state that the police command would remain neutral, adding that any officer who engages in any act contrary to the laid down rules would be made to face the full wrath of the law.

Meanwhile, the state Deputy Governor, Chief Simon Achuba, has cried out that his life was in danger, following the alleged withdrawal of his  security details by the state commissioner of police, Busari Hakeem.

Addressing journalists yesterday at his official residence in Lokoja, he lamented that his security details were ordered to report to Government House on February 15  for briefing by the ADC to the governor.

He said he was to travel home when the ADC to the governor called them for security briefing.

According to the deputy governor, on getting to Government House, the   ADC to the governor took them to SARS office to make statement.

“They accused my ADC and orderly of gun-running but they denied the allegation. As I am speaking now, they are under detention in Government House. I informed the Commissioner of Police on the situation but till now he has refused to take any action.

“I am a member of the APC. I reported to the national leader of the APC. My imprest has been stopped for  reason by the governor.

“I live as deputy governor in the house without security, I travelled home without police; my life is in danger,” he cried out.