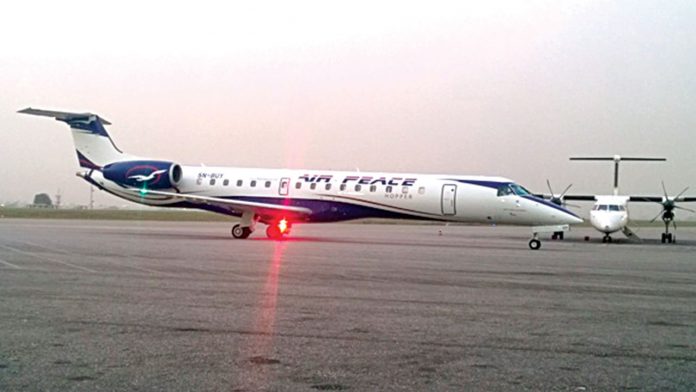 Nigeria’s major operator, Air Peace has made a historic landing as the first commercial airline to fly into the newly-built Bayelsa International Airport, amidst euphoria and excitement of the people of the state.

The flight operated by Capt. Crosby Otobo and his crew took off from the Murtala Muhammed Airport, Lagos, at about 2.50pm and landed on the 3.5-kilometre runway of the Bayelsa International Airport at about 3.35 pm.

The flight was welcomed by a crowd of overjoyed indigenes and residents of Bayelsa, including the state Governor, Henry Seriake Dickson and top government officials.

The flight was also honoured by men of the Fire Service Department, who positioned with their trucks on both sides of the runway and sprayed arcs of water to salute the aircraft.

Air Peace commended Dickson for undertaking such a lofty project.

The airline’s Chief Operating Officer, Mrs. Oluwatoyin Olajide, said the airport would be a vehicle for the industrial and economic development of the state.

“Air Peace is an airline of many firsts. We are indeed honoured and delighted to make another history as the first commercial airline to operate into the Bayelsa Airport.

“Since we commenced commercial flight operations over four years ago, Air Peace has greatly contributed to the development of cities and states we operate into.

“We have no doubt that the Bayelsa International Airport will provide us an opportunity to support the effort of the Bayelsa State Government to develop the state.

“It is indeed a new dawn for the people and residents of Bayelsa State. We urge the flying public and the business community to take advantage of this wonderful facility to break new grounds and realise their business and leisure interests”, Olajide said.

The two major players in the Nigerian e-commerce space –  Jumia and Konga – are considering listing their respective shares on the international market.

Jumia had earlier announced its planned $1.5 billion initial public offering (IPO) on the New York Stock Exchange this year, which would reportedly see the business valued at $1.5 billion, even as MTN Group, Jumia’s largest shareholder is looking to raise up to $600million from the sale of its shares during the IPO.

In May 2018, Jumia was said to be planning an IPO in Frankfurt or London as its mother investment company, Rocket internet was seeking an exit, a report that was neither denied or confirmed.

Konga it was gathered, was considering an IPO that would shore up the potential of the e-Commerce industry in Nigeria.

Mark Jessey, a prominent stock analyst on NYSE had hinted of the strong possibility of a Konga IPO before the end of next year, a move which, according to him, would be welcomed by investors.

When contacted on the likely listing of Konga, Chris Uwaje, a tech enthusiast and Africa Chair for IEEE World Internet of Things (WIoT), noted that the company has added huge value to the e-commerce landscape which should see its value gross over $3.5 billion.

“Within the last seven months, I am aware that the new owners of Konga have repositioned the company strategically and upped the overall value of the business. Konga could claim to be unarguably the most structured e-Commerce company in Africa, with huge infrastructure and technology back-bone which is rare in Africa and which is the strength of global players such as Amazon and Alibaba.

“In valuing Konga, you must consider its strategic 360 degrees Omni-channel strategy, their Central Bank of Nigeria-licensed mini bank – KongaPay which I am sure cannot be valued anything less than $750 million and best in Africa digital logistics division known as Kxpress with a nationwide network. I know Konga is likely the only company that does about 90 per cent of her long haul and last mile deliveries in the continent.

“In today’s investment climate, investors are investing strategically in quality companies that are owned by experienced and well tested local Entrepreneurs with global vision and I am sure you know Konga has all these qualities under one roof in addition to over thirty physical retail stores spread all over Nigeria and which also act as delivery, collection and payment centres, so they could ask for more than $5 billion for their sweat,” Uwaje said.

Commenting further, Uwaje stated: “We have also seen the huge investment in massive warehouses across major cities such as Abuja, Enugu, Akwa-Ibom, Rivers State, Imo, Kano, Delta, just to mention a few, in addition to more than three mega structures in Lagos.  I am also aware that the company recently spent over N9 billion in acquiring a very huge warehouse in a high-brow area in Lagos in preparation for Artificial Intelligence and Robotics-driven warehousing.”

According to Uwaje, who doubles as the Director General, Delta Innovation Hub, Konga is an African e-Commerce Unicorn whose impressive strategies and achievements within such a short period would be hard to replicate in the Nigerian e-Commerce space.