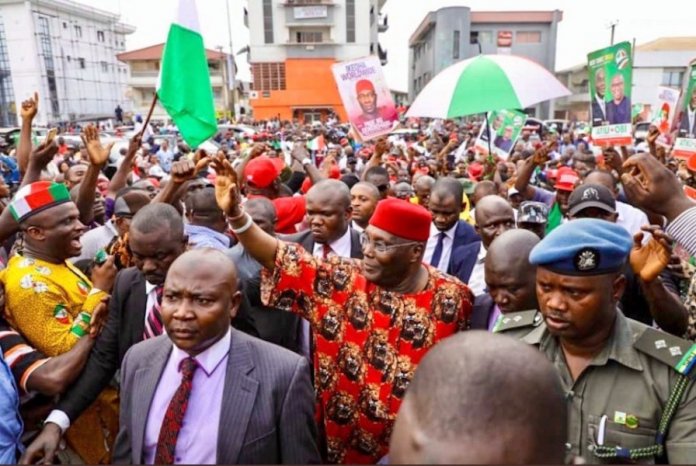 “…writes on the campaign tour of the Ogun State governorship flag-bearer (standard-bearer) of the APC….”

“PDP demands for Buhari’s disqualification for using ‘mercenaries’ at Kano rally” Yank off the first ‘for’ because it is otiose. As a verb, but when used as a noun, the form changes and takes ‘for’. (Source: as above)

The next two errors are from DAILY Sun Editorial of February 4: “The British has (have) pledged support for the Independent National Electoral Commission (INEC) and civil society, (needless comma) to help deliver credible elections.” Alternatively: Britain has….

“…is one full of heroic incidences (incidents) and the triumph of the human spirit against all odds….” (DAILY SUN OPINION Page, February 4)

“2019: Atiku’s endorsement by Ohaneze, NEF, others mark (marks) end of Buhari’s Presidency” (NATIONAL NEWS Headline, February 4) This is a simple error of attraction.

“Gang up (Gang-up) against Buhari will fail again like in 2015—Presidency” (Source: as above)

“…I heartily congratulate you on this auspicious occasion of your 75th birthday anniversary.” Yank off the last word in the extract.

“Your steadfastness, uncommon dedication, courage and selfless service to humanity is a source (are sources) of pride to all of us who share your faith.”

“…we have arrived at a crossroad….” (DAILY SUN OPINION Page, February 6) 2019 elections: at a/the crossroads

“Buhari has consistently kept faith with Nigeria. He is not about to join (climb/jump on) the bandwagon.” (Full-page advert endorsed by Buhari-Osinbajo Corporate Support Group, THISDAY, February 9.

Mr. Ebere Wabara’s column, although not novel, is a good effort to redress the attenuating standard of journalism in our land.

But since his goal is to call writers’ attention to their mistakes to avoid recurrence and educate readers generally, mentioning errors’ sources are (sic) absolutely irrelevant and unnecessary.

Besides, in his column (January 12) comments such as: “Is The Guardian still the flagship of Nigerian journalism?”  “The self-acclaimed Voice of the Nation (referring to Daily Sun), no standard publication dispenses with it (still Daily Sun),” are scandalous, to say the least. Maybe these snides (sic) are also part of the errors by Wabara’s judgment!

The gentleman of the press even failed to do enough justice to his own paper’s errors. His sharp and piercing eyes could see only one of the numerous! ‘’A court ruled (a comma missing) affirming zoning (another comma missing) but paradoxically dismissing Atiku’s suite,’’ the only one seen by Wabara, that is, suit!

Mr. Wabara should note that independent clauses or sentences connected by a coordinating conjunction such as ‘an’,’or’,’but’,’nor’,’for’, ‘yet’ and ‘so’ should admit a comma before the conjunction—in this case – ‘but’

Hope Wabara’s life ambition to work in The Guardian was not dashed by the Flag-bearer (standard-bearer), denying him employment, hence the bitterness?

I must thank Mr. Anonymous for the incoherent feedback which has been perfunctorily and marginally edited. Ordinarily, I should have dismissed this mail and its combative content that reeks of diatribe. But, there is no doubt that there are other readers with his kind of preposterous disposition to intellectual issues who need to be civilized.

This columnist welcomes rejoinders in any form, but let such contributions be in good taste. The media platform is a public space for the exchange of ideas and information. It should not be abused under any disguise, especially when you do not know the background of your audiences. No matter the level of provocation—if that is the right word—we should show maturity and responsibility.

The moment you exclude the identities of publications with highlighted blunders, this column loses credibility as far as I am concerned. What it means, going by the contributor’s befudled thinking, is that I could just concoct errors without any attribution (source)! The essence of the identification is for reference purposes and confirmation. I am not a fictional writer. ‘Wordsworth’ is a scholastic column that strives for language purity (not perfection, as there can be none) in the Nigerian media, particularly. It is not a soft-sell platform for journalistic gossip, mischief and celebration of inanities.

It should interest one and all to know that I do not have anything against any publication by virtue of my robust media pedigree having worked in three out of four national newspapers as a full member of the Editorial Board (among other editorial and administrative assignations), edited one of them almost a decade ago and written award-winning articles that cut across multifarious disciplines in the heyday of Daily Times and beyond. So, when I ask whether ‘‘The Guardian’ is still the flagship of Nigerian journalism’? It simply infers, to those who appreciate etymological and morphological registers, which the publication has fallen below my expectation.   This is easy to understand by any cerebral mind. It is not derogatory at all.

With regard to ‘DAILY SUN’ (the place I work and maintain two racy columns), even the publisher (who is a friend of mine and employer) and the entire directorate know full well that I can never, no matter the circumstance, run the medium down because of my very special relationships with the organization’s management and staff. If I may ask, what is wrong in my questioning institutional self-acclamation?

As for having any employment grouse about ‘The Guardian’, I just laugh at the idiocy! If Mr. Anonymous gets to know my profuse career antecedents and job currency, he would be shocked at his imbecilic ignorance. In my part of country, we say that someone who does not know another contemptuously calls him his friend.

My not correcting all faulty punctuation marks is not an oversight or incapacity. It is to avoid trivialization of this column. As critical as they are to classical writing, they are too mechanistic for me to dwell on. I am interested only in lexical and structural gaffes, not the totality of the grammar of English. If I address all the media language goofs, this column is likely to become stupendously academic, didactic, boring and unappealing. There is even no space for that. My goal is to make it educative and entertaining for pleasurable reading.  I have gone this length to foreclose receipt of shallow, vexatious and baseless rejoinders. I look forward to constructive criticisms, rich contributions, analytical comments and logical observations that culminate in reader enrichment and the columnist’s edification.

Finally, as you move to the next column, let me reaffirm that I am a gentleman of the press on sabbatical to Dr. Orji Kalu’s reputational management.