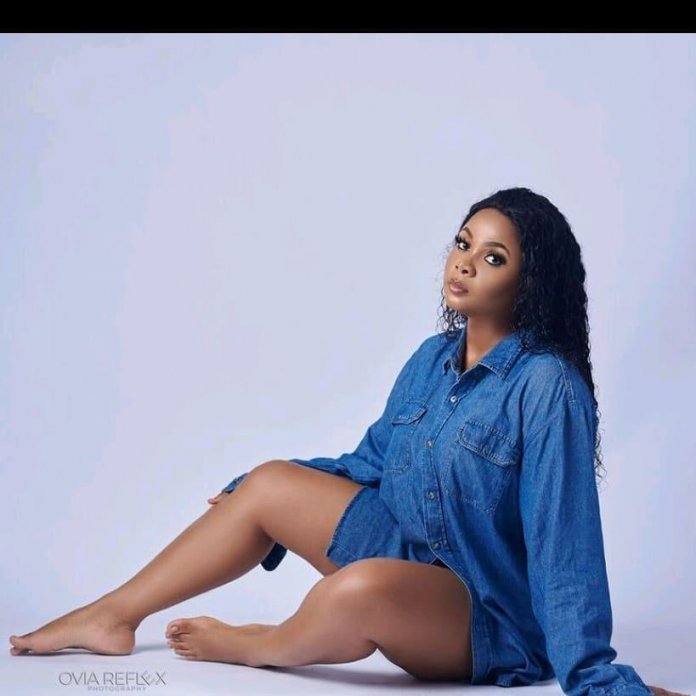 Fun-loving Nollywood actress, Bimbo Ademoye is known for her role in series like This Is It and Desperate House Girls. Her acting career started in 2014 with a short film by Eva George titled, ‘Where Talent Lies’. Some years back, Ademoye was just a rookie combing audition centres. Today, she is one of the hottest in Nollywood. The 28 years old actress, who is also a fashion entrepreneur, shares the story of her travails and triumph in the movie industry with Ferdinand Ekechukwu

Scene one, act two…. Set… Action! A director’s voice could be heard yelling from the scene. The cast and crew dotted all over the place while taking their turns on the set of a movie. Somewhere around location, fast rising actress, Bimbo Ademoye holds straight up her script trying to commit to memory her lines. It’s her first day on set. Some moments after taking her shots, she would be holding her phone and responding to a chat which has taken barely few hours to schedule.

“Yes it can be done,” she responded to the offer to chat at first, having missed a call. “But I’m currently on set filming, hence the late response.” She’s on the set of the movie titled “The Confessor”, Ademoye revealed. “This is my sixth project this year.” That sounds quite impressive from someone relatively new in a bursting industry. It means she must be getting her act right. Besides, she’s driven by passion and seeking every available acting opportunity she could find.

So far, she has lost count the number of movies she has featured since her breakthrough in 2015. On attempt at the figures however, she puts it above 50. “Erm…to be honest I’ve lost count, but about 50 if not more.” She has taken on roles in movies including “Gone” with Stella Damasus, “Light in The Dark” with Rita Dominic, and “In Back Up Fire”, and on to her award winning role in the movie “Personal Assistant”.

Between now and when she first started out in Nollywood, what has changed about the Best of Nollywood Awards 2018 Best Supporting Actress which influenced her meteoric rise? Her response sounds convincing as much confidence as she is. She believes she has improved as a person and most importantly, an actor and still open to learning more, but can “confidently say that I’ve improved.” To this truly it appears so having to turn down script due to unrealistic storylines with lack of depth to acknowledging good ones.

She adds: “If there’s anything I owe my fans, it’s a good content, interesting and realistic roles.” Growing up as a kid, Ademoye realised she could act. She had tested her talent performing in front of over 600 guests as a pupil in form five and got a sound applause. “I was in primary five at that time. Their cheering and clapping made me feel like I don’t know, maybe Beyoncé,” she said letting out a smile.

Now acting alongside known names in Nollywood is actually an indescribable feeling. The experience meeting these names she so adored on screen long before she joined leaves her with ticks of emotion.

She relieves: “It just makes me thank God because I know that I’m on the right path. Sometimes, I shed a tear or two, then pinch myself back to reality.”

Possessing layers of multiple personalities, personify the real Ademoye character as she admitted to spontaneity, which makes a good trait for an actor, as most often expected to deliver on her role. It is not unusual though. But how spontaneous is she? “Oh I have different personalities…sometimes even I surprise myself.” On her personal life, she holds family and true friends close to heart, especially her father.

Childhood was amazing for her growing up with a single father. Her parents separated when she was two. “My dad fought to keep us. Let’s just say I’m so glad he did. I do have a relationship with my mom. My dad just happens to be my best friend. I have the best father in the world. Moments spent with my dad were the best moments of my life. He made sure we had everything we wanted, even though at the time, he couldn’t afford a lot of things.”

As the chat progresses, she appeared a bit free to talk more personal. She thinks she’s dreary when asked to tell one thing which she hasn’t told anyone in the past. “Why should I tell you if I haven’t told anyone,” she responded laughing, like she was taken aback but that would make the conversation lighter. “In all honesty I’m a very boring person. I don’t think I have anything that serious that one or two persons don’t know.”

The last time Ademoye was in a relationship was in 2011. That’s pretty much a long time and appears quite unreal. So what has happened to her sex life since then… does she mean she has abstained from seeing a male person and its related activities like sex. Besides she’s a beautiful lady, fun loving and sexy. Could it be a thing of choice or guys don’t easily get attracted to her? “Oh well… I wasn’t even having sex at that time,” she said surprisingly. “I just haven’t found the one. I mean I’ve gone on dates and all. Just haven’t connected deep with anyone or vice versa.”

Hard to believe her, the question was flipped. “But you aren’t a virgin so why?” She responds, “And you’re sure of this how.” Wait…could it be that her boyfriend couldn’t take the excuse of her not having sex and got bored and then ended the relationship? “Not at all…we were in Covenant University, probably both virgins.” In passing she appeared to have admitted.

Doubted if she was being reasonably tactful with her response, she further responded. “Ha…I learnt the hard way. I’m still suffering from a headline that said I can act naked no matter the amount.” Since then “My daddy wouldn’t let me hear word. He reminds me every day. I just got off the phone with him. And he ended the conversation with ‘don’t act naked o.’

At 28 and doing good for herself without fear, the Business Administration degree holder plans to focus on herself as a person and as an actor to remain in the industry. “I want to work hard enough to a point where I don’t have to introduce myself. My only fear is to fizzle away without making a mark.”

Theresa Edem Isemin My Career Has Been a Long Journey, Filled with Ups and Downs