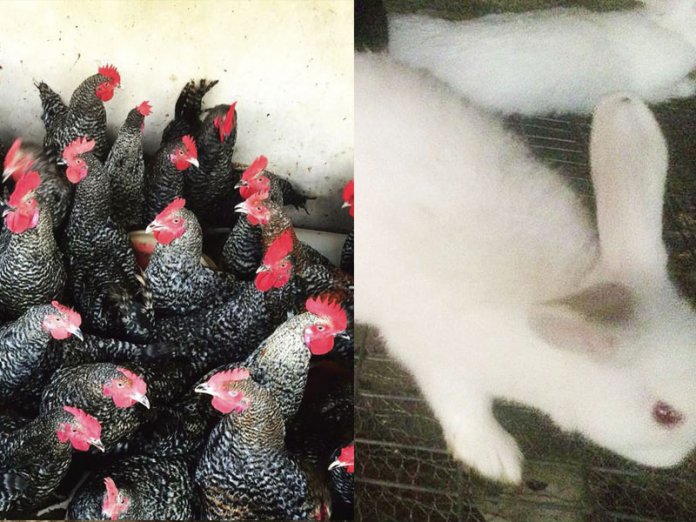 In this report Ugo Aliogo writes about the exploit of the Chief Executive Officer, Wolewale Farm Limited, Kehinde Alaba, in the agriculture value chain

Kehinde Alaba is from a humble background. From an early age, he developed a strong liking for farming. His desire was to pursue a career in farming, a path most youngsters will not like to walk follow.

He knew having passion for this career path was not enough, but there was need to integrate business into it to ensure it succeeded.

In his quest to get a basic understanding of business, he read a book titled: ‘Rich dad and Poor Dad’. The knowledge he gained from the book illuminated his mind on how to build and structure a business. He realised that it was much better to start up a business, than go in search of white collar jobs. He also understood that agro-businesses especially at the small scale level was cheaper to invest in and would yield handsome rewards in the shortest time possible.

Alaba, who is a graduate of Adekunle Ajasin University, Ondo State, where he studied History and International Studies began his foray into agro-business by embarking on snail rearing. During his penultimate year in the University, Alaba and his twin brother were able to raise N50, 000 to set up a snail farm.

The idea for the snail farm was from a research, where they conducted a survey on how many farms were into snail farming. From the research, they observed that only few farms did the business, therefore they decided that since there were few people doing it and it did not require much capital, there was need to delve into it for the long term.

On completion of his National Youth Services Corp (NYSC) programme and with white collar job not in near in view, he used his savings to start a poultry farm in his compound.

In his desire to expand the frontiers of his knowledge about snail farming, he decided to learn the rudiment of the business under the tutelage of his friend Abdulazeez, who also gave him a video clip to watch.
Presently, Alaba is the Chief Executive Officer, Wolewale Farm Limited, where he is engaged in snail, rabbit, poultry farming and crop production.

According to him, rabbit farming is another untapped market because people are not conversant with the health benefits of a white meat which the rabbit belongs. He, however added that the rabbit feed is economical and doesn’t require much trouble, but at the moment the market is not that large. Alaba has successfully positioned the crop production unit of the business to become an avenue to provide different staple foods to consumers.

According to him, “In the areas of animal production they have been immense success. When we started our snail farming, we started with 50 snails and after a year we were having like extra 150 more after eight months and more after that. Though the first year there was no sales, but after two years we were able to sell to breeders, individuals, restaurants and bars.

“Though they were incident of damaging of crop by herdsmen but we were able to harvest some and sell and use the rest for feed formulation for our birds and rabbit.

“In 2018, it was more promising because we had more lands allotted to me, so I was able to use 20 acres of land with different crops planted like maize, okro and potato and large increase in harvest.

“In 2018, there was good sale in okro during the early period of the rainy season there was sharp increase in price and we were always smiling to the market every four days. Frankly, we have recorded great increase, though we had some hiccups but we were able to overcome.

“I have tried to source loan from banks but their demands are kind off cumbersome and sometimes impossible to achieve. I was contributing money into the bank of agriculture for months, when it was time to access loan from them they told me that I have to get a civil servant in the state to sign for me to access the loan. I searched for people and they were giving excuses, so I just stopped pursuing it. So most times I use personal money and profits ploughed back and also borrow from family.”

He further noted: “Finance is the most challenging area. There are times that you are unable to get cash to fund your business and this has a way of affecting the growth of the business.

“For example, sometimes you might have a large order for snail which you might also need to outsource fund, but because of insufficient cash you just have to supply what you have and in such cases, the volume trade matters a lot.
“Also, insufficient capital has prevented from purchasing more plots of land and finance the farming. But thanks to God we have been able to scale through by ploughing back our profit and also borrowed from family.
“Also, there is also an initiative in which workers work and they get paid after harvest which on the other hand relieves me of the stress. Another challenge is the nonchalant attitude of most workers towards work, despite receiving payment at the end of their work.

“When I started poultry I bought Boar grower feed for N1,900 and starter feed for N2600 – N2700, but now feeds are now N2,900 for grower and N3,600- N3,700 for starter and the same market people and consumers still want to buy the same Chicken for the old price which is impossible for farmers. Also of recent, day old chicks of broiler that we used to buy for N150 during off peak period and during the peak period for N250 suddenly jumped to N350- N380.

“Then add up the feeding, drugs, heat for brooding and at the end the market still want to buy at the same price. But I have been able to scale through by just rearing for four- five weeks, then sell out to breeders then probably rear few to table size so that it won’t turn to panic sales. I have been in farming for five-six years now.”

To achieve success in his operation in the farm, Alaba had to put in place a vibrate workforce who clearly understands the goals and visions of the Wolewale Farm Limited. When Alaba started, he had few people working for him on part time basis and they assisted in the processing of the chicken, snail and others activities in the farm.
Alaba and his cousin were available on a full time basis to nurture the business which was in its infancy, while they sourced for more people to work in the farm.

In understanding the potential in agric-business such as agro-cropping and livestock production; Alaba explained that: “The fact about agriculture is that you must find a need for your produce, don’t start producing and after which he begin to search for buyers, so that in the long run, you don’t get frustrated. It will lead to panic sales and you never profit on panic sales.

“But in 2018 the table changed. I planted on 20 acres of land, at first the change in weather which made maize look small in size because of lack of rain in the early period of 2018, that made sales drop. On the long run, the cost of production didn’t equal profit. There was deficit already. “Then we decided to plant Okro since it was selling. Okro was selling in March for a basket for N3000, N2,500, N1,800 dropped to N400, N500, N600 which was a great crash. The monies realized from the sales were used to pay for workers, harvesters and chemicals used.

“Even the sweet potato market crashed below, so the only profitable crops were maize and sorghum. For the animal farm we were able to break even in 2018 because compared to 2017 which we started rabbit farming and sales were just starting to pick up.

“But in 2018 restaurants and bars placed orders for three-five weeks. They also people request for weaners for rearing and for pet. Also, chicken sales increased in 2018 compared to 2017 in which we reared many layers to broilers.

“In 2018, there was a ratio increase of 60: 40 sales of both broiler and layers. Also, we were able to rear broilers of 4weeks for breeders to rear till adult old. Furthermore, we were able to sell out 300 snails in 2-3 weeks, compared to the delay in sales for like months.”