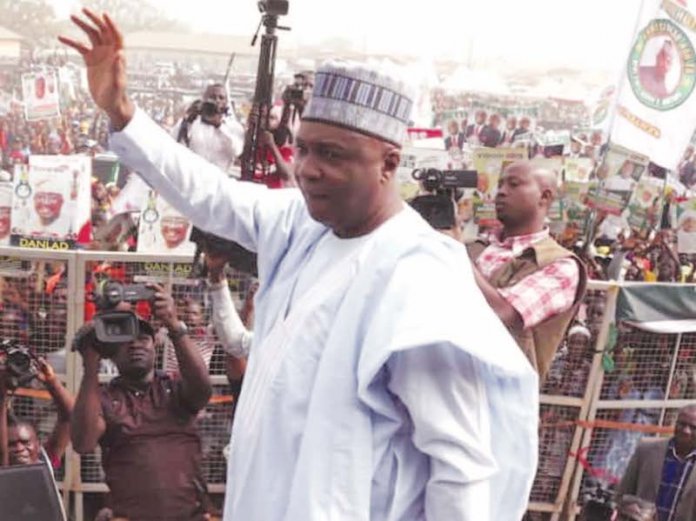 The Senate President, Dr. Bukola Saraki last night told President Muhammadu Buhari and the All Progressives Congress (APC) that Kwara State remains “no- go- area” for the party in the forthcoming coming elections.

Saraki while addressing a mammoth crowd of Peoples Democratic Party (PDP) supporters at a campaign rally at Afon, Asa Local Government Area (LGA) of the state, said the fact that he was the focus of verbal attacks by APC leaders at their rally in Ilorin on Monday only justified his position that the party has nothing to offer Nigerians.

He also restated his earlier position that the APC has nothing to offer the people of Kwara State, describing the party in the state as merely a conglomerate of greedy politicians.

He called on the electorate to use the first election to teach the APC a lesson to show that the state will never be subjected to taking orders from Lagos.

According to him, “Saturday election is all about Nigeria and polls is also about Kwara State”.

He said, “When I first said this many wondered but when Buhari came yesterday you all saw what happened. They spent the entire day abusing me because they have no plan for us here except to abuse Saraki.

“That is unlike the PDP that trusts us and have assured us of a better deal for our people.

“PDP is the only party today with active plan for development and youth employment. They also have great regard for us in Kwara State.

Saraki added, “Let’s use this Saturday election to teach them a lesson that Kwara State is our own and we will never take orders from Lagos. Kwara is a ‘no-go-area’ for them; let’s tell them with our votes.

“The APC is made up of people who enjoyed your votes because we asked you to vote for them even when you didn’t know them but out of greed they are out of our fold.

“The second group is made up mainly of rebels who have nothing to offer but just to antagonise Saraki after they had benefitted immensely from our political structure”.

He however stressed that, “Buhari does not understand governance. We are not abusing him, we are saying the truth.

“Government alone cannot find job for everyone but you establish businesses to aid employment but since this President got into office businesses have been closing down with no replacement.”

“There is urgent need for Nigerians to elect Atiku Abubakar as the nation’s next president on Saturday, assuring that the PDP presidential candidate will wipe out hunger, poverty and unemployment from the land”.