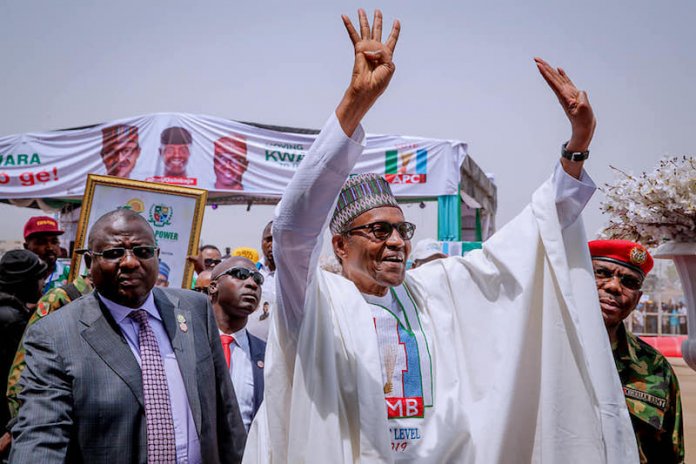 Deji Elumoye in Abuja and Hammed Shittu in Ilorin

President Muhammadu Buhari has again reassured Nigerians that the proceeds recovered from looters would be reinvested in the infrastructural development of the country.

Also, the National Chairman of the All Progressives Congress (APC), Adams Oshiomhole, has called on the people of Kwara State not to vote for those who looted the country for 16 years.

This is coming as the state chapter of the Peoples Democratic Party (PDP) has stated that the scathing attacks and vituperations directed at the national leader of the party and Senate President, Dr. Abubakar Bukola Saraki, by APC leaders will not dissuade the people of the state from supporting him and voting out the APC.

The Senate president, has also responded to the insults heaped on him by the chieftains of the All Progressives Congress (APC), including former Governor of Lagos State, Bola Tinubu, and Oshiomhole, at a campaign rally in Ilorin, describing the duo as frustrated politicians.

Speaking yesterday at the APC presidential campaign rally which was held at Ilorin Metropolitan Square, along Asa Dam Road, the president also restated that his administration would continue to bring those who abuse trust before the law.

“We are going to continue to take those who abuse trust before the law; collect what they have stolen and reinvest them in infrastructure”.

He stated that, “I assure you that the undertaking we made in 2015 in the three major issues APC believes in (security, economy and fight against corruption), we have not failed.

“Wherever I go I repeat myself on these issues, so as to remind you where this country was before we came in, where we are in now and what we are able to do with the resources that are at our disposal. The people of the North east as far as security is concerned, are our major witnesses of our performance.

“On the economy, we thank God the three previous rainy seasons were good. We made fertilizers available and reduce the prices it used to be. People are now back to the farms and nobody regretted it. We are able to ensure food security and people are living respectable lives; in fighting corruption, we are not going to give us.”

In his remarks, the National Leader of the APC, Bola Ahmed Tinubu, said the people of the state have over the years been allegedly held captive by a single individual.

National Chairman of the party, Adams Oshiomhole, told the crowd of supporters that “I cannot wait till Saturday for Kwara people to celebrate their new found freedom.

“Also it will be a day for Kwara people and for Nigerian politicians to see how APC will record a sound electoral victory in Kwara.

Oshiomhole called on the people of the state not to vote for those who looted the country for 16 years.

Oshiomhole also told the people of the state to be wary of the PDP and its presidential candidate, Atiku Abubakar.

He appealed to the people of the state to vote massively for the president, saying he had changed the essence of governance in Nigeria.

“While President Buhari is fighting corruption and putting looters in jail, Atiku promises to give amnesty to looters.

“When Buhari said he would protect the naira and defend Nigeria’s success economically, PDP promises to pursue wholesale privatisation of Nigeria’s assets.

He also told the crowd that the APC was in the state to “celebrate the end of Bukola Saraki.

“I am here to see the actual translation of enough is enough, the era of your oppression is over.

“Era of oppression is over, I join you in Kwara State to celebrate your freedom.”

But in a swift reaction, the state chapter of the PDP said the scathing attacks and vituperations directed at the national leader of the party and Senate President, Dr Abubakar Bukola Saraki by APC leaders will not dissuade the people of the state from supporting him and his party.

In a statement by its state Publicity Secretary, Mr. Tunde Ashaolu, PDP noted that rather than telling the people what their party had done in the last three years, the APC leaders, including Tinubu, resorted to attacking and insulting the Senate president.

The statement said: “All through their campaign today (Monday), all they could do was to cast aspersion on the person of Saraki.

“Most comments at the rally were nothing but verbal attacks, invectives, character assassination and subterfuge.

“We are, however, not surprised by the rantings of all the APC leaders particularly that of Tinubu, who has always been embittered by the rising political profile of the Senate President. He is always disturbed and frustrated at the mere mention of the name, Saraki.

Responding to the insults heaped on him by the chieftains of the APC, including Tinubu and Oshiomhole, the Senate President said yesterday that the insulting statements made against him by the duo were expression of their frustration over the imminent loss of their party in next Saturday’s election.

Saraki in a statement by his Media Adviser, Yusuph Olaniyonu, said the APC leaders know that their party will sure lose the presidential and National Assembly elections on February 16, saying that is why in their desperate mood they are only hurling abuses instead of discussing issues and telling the people what they will do for them.

According to Saraki, “They came to Kwara State to hurl insults at me and my people, instead of explaining to the people what they want to do differently and what contributions their flagbearers and other leaders in the State have made to our various communities to justify the people shifting their loyalty to their dying party.

“They promised nothing concrete that will improve the standard of living of the people and provide infrastructure. They have only come to Kwara to vindicate my position that they have no good plans for Kwara State and its people. It is obvious that the APC have nothing to offer Kwarans.

“They represent nothing good for our people. My problem with them has always been that after we worked with our people to support them to win in 2015, they refused to work on infrastructure and other policy issues that can bring direct benefit to our people.”

Speaking on Tinubu’s comments, the Senate President emphasised that “we have never expected any good words from him. All his life, he will continue to belly ache and nurse grudges over my opposition to the Muslim-Muslim ticket idea in 2015.

“As far as he is concerned, I stopped him from realising his ambition then. However, I believe my action then and now is in pursuit of national interest.

“Again, I supported President Buhari in 2015 because I believe he could make a positive change. I left the party when I realised he lacked the capacity and the desire to make any change.

“Tinubu on his own part said though he agreed with me about my assessment of the man, he would continue to support Buhari even if the man had to govern from the hospital stretcher because that is the way he (Tinubu) could become the President in 2023.

“So, while my position is premised on national interest, Tinubu’s is based on his personal interest and ambition. Now that Tinubu’s new speciality is to hurl insults at people like former President Olusegun Obasanjo and former Vice President Atiku Abubakar, focusing on me today is okay if it will help him feel good.

“It is surprising that a man like Tinubu will be talking about morality and corruption. This is a man whose disrepute is known both within and outside Nigeria.

“This is somebody who personifies everything that is wrong with the Nigerian system. Well, I am not ready to roll in the gutter with him. Unlike them, I will stay on the issues that are germane to national development and the welfare of our people.”

Saraki further explained that what Tinubu and Oshiomhole did yesterday was to insult the people of Kwara State who are independent -minded, forward looking, assertive and God-fearing.

He added, “On Saturday, the APC will be punished for their bad behaviour. Kwarans will tell them that they cannot take dictates from power mongers, pretenders and hypocrites. The people of Kwara State will never take dictates from selfish individuals. Their evil design will be thwarted on Saturday and March 2”.