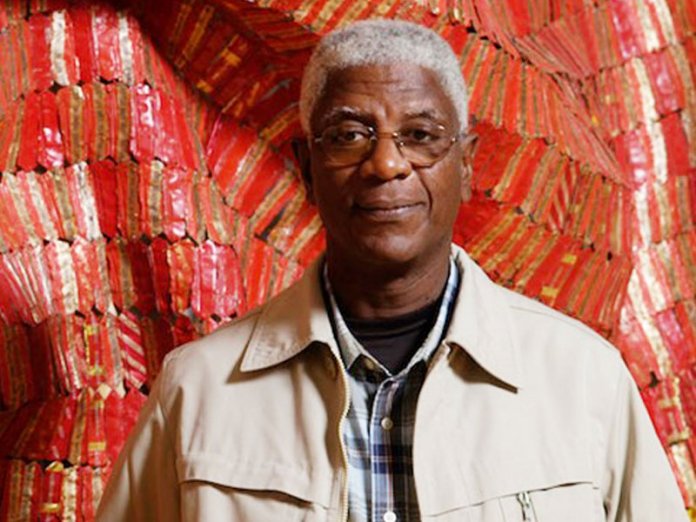 An “Odogwu” they called him. That is an Igbo word for a hero. At 75, El Anatsui’s profile shimmers before his teeming dewy-eyed acolytes. A coterie of sculpture lecturers from the University of Nigeria, Nsukka’s Department of Fine and Applied Arts held an exhibition, which opened on Saturday, February 2, at the National Gallery of Art, Enugu, to commemorate his birthday.

A few days later at the same venue, the fourth session of the National Gallery of Art’s Art Appreciation Workshop, anchored by Professor Ozioma Onuzulike, was organised in honour of the septuagenarian artist. About the same time in Lagos, a solo exhibition, titled Icing on Burnt Cake – A Tribute to El Anatsui at 75, opened at the Thought Pyramid Art Centre in Ikoyi, Lagos.

Indeed, there are good reasons for the local art community to coo over the trail-blazing artist, who had been teaching art at the University of Nigeria, Nsukka since 1975. Not only have the former AKA Circle of Artists member influenced and inspired many artists, he has also invested in the development of art in Nigeria. As a patron of the annual Life in My City Art Festival in Enugu, he had sponsored its four top winners to the Dakar Biennale (called Dak’Art) in 2017 and pledged to sponsor additional six of the festival’s top winners to the next edition of the same event.

In addition, the artist has built a gallery at the university as a gift to a community, where he had experienced his phenomenal artistic growth. Born as the youngest of his father’s 32 children in the small Ghanaian town of Anyako in 1944 during British rule, he was later raised in a Presbyterian Mission House by his uncle, a Presbyterian Minister. Sensing as a boy that he “had a kind of calling” to be an artist, he enrolled at the University of Science and Technology in Kumasi to study fine art, which was then an “unimaginable” thing to do.
Anatsui’s break from the British-style curriculum, on which he was weaned, came after a Eureka moment at national cultural centre in Kumasi, where he discovered the “adinkra” motifs.

Fast-forward to many years later, he had not only “indigenised” his art, he had also begun to interpret the word “sculpture” in new fascinating ways.

The US-based Nigeria-born art historian and critic once described his art as challenging “normal order of pictorial balance”. This is because Anatsui himself sees sculpture as something that explores the dynamics of a subject, a puzzle that assumes different forms. For instance, one of his works, “Intermittent Signals”, looked different when it was displayed in 2011 from how it looked in 2007.

It was at a 2012 Bonhams Modern & Contemporary African Art Sale in London that El Anatsui’s already glittering international profile was burnished. At the auction, one of his installations, a 350 X 500cm work titled “New World Map”, had sold for a record $850,000. The record-breaking Ghanaian Kente-inspired work, described by the Bonhams Contemporary African Art director Giles Peppiatt as “a massive hauntingly beautiful contemporary statement”, was a shimmering wall hanging, delicately woven with thousands of flattened bottle tops.

This record sale followed on the heels of the sale of another of the artist’s tapestry-like work for over $720,000 at a Bonhams charity auction in New York two weeks earlier.

There are indeed other similar rippling, shimmering installations by the artist, who marked his 75th birthday on Monday. It is to these and others that he owes his dizzying ascent up the ladder-rungs of fame. Anatsui once explained that the colourful bottle tops are cryptic reminders that African slaves were exchanged for European liquor during the transatlantic slave trade. As for the wall hangings’ apparent fluidity, they allude to the ever-shifting relationship between Europe, Africa and America.

Clawing his way up from out of the drudgery of an ivory tower existence at the University of Nigeria, Nsukka, he has risen to become one of the continent’s most phenomenal artists. That his works are currently housed in some of the world’s most prestigious museums – like the Metropolitan Museum of Art, the British Museum and the Smithsonian – is a credit to his renown. At the 2007 Venice Biennale, one of his rippling metal tapestries drapped over the façade of a museum caused a stir among the aficionados. In 2012, his 37-foot-high sculpture made of recycled pressed tin and mirrors woven together with copper wire, titled “Broken Bridge II”, was displayed at New York’s High Line, an elevated park built on an old freight rail line in Manhattan.

Still on his notable exhibitions worldwide, he has been featured at the October Gallery, London (UK) in 2016 and in Hayward Gallery, London (UK) as well as in such reputable spaces across the US as Brooklyn Museum, New York in 2013, the Clark Art Institute in Williamstown, Massachusetts in 2011, Rice University Art Gallery, Houston in 2010, the Metropolitan Museum of Art, New York from 2008 to 2009, the National Museum of African Art, Smithsonian Institution, in Washington, D.C. in 2008 and the Fowler Museum at UCLA in 2007. He has also been exhibited at Centre de Cultura Contemporània de Barcelona (Spain) in 2001, among other places, at the Palazzo Grassi, Venice in 2011, Nationalgalerie, Berlin (Germany) in 2010, Institut Valencia D’Art Modern, Valencia, Spain, in 2009 and Centre Pompidou, Paris (France), among other venues.

After he was awarded the Venice Biennale Golden Lion for Lifetime Achievement – a prize that “acknowledges not just his recent successes internationally, but also his artistic influence amongst two generations of artists working in West Africa” – he had gone on to bag an honorary doctorate degree from the US-based Harvard University on May 26, 2016 and the Praemium Imperiale award, as the first Ghanaian to win the international art prize, in 2017. Previously, he was awarded the Visionaries Artist Award from the Museum of Arts and Design in New York City and the 2009 Prince Claus Award.

Back on local art scene, his works have consistently been featured among the top five bestselling lots at the Arthouse Contemporary Limited auctions, held biannually in Lagos. He has also twice been featured at the Terra Kulture-Mydrim Gallery Living Masters’ exhibition.

That his 75th birthday morphed into a festival of sorts should, therefore, surprise no keen adept of the visual arts scene.