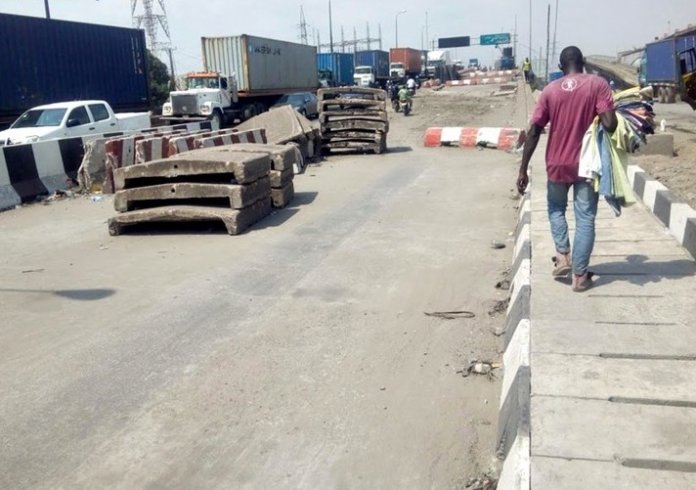 The Federal Ministry of Power, Works and Housing has said it would rehabilitate the widening expansion joints of the Apapa-Leventis Bridge now that it has been reopened to vehicular traffic.

The ministry reopened the outward bound stretch of the Leventis Bridge in Apapa last Wednesday, after it was closed for about eight months for repairs.

The reopening of the bridge is expected to reduce the congested traffic in and out of Apapa through that axis, the Director, Highways South West, Federal Ministry of Power,

Works and Housing, Funsho Adebiyi, who declared open that stretch of the bridge, said.

“Hopefully, the gridlock will end today.

When we started construction works about eight months ago, the gridlock became a source of concern for everybody, and we appreciated the inconvenience associated with it but by the grace of God, the gridlock should end today (on Wednesday) as this section will be open so we can have the two-way traffic,” he said.

That section of the bridge was shut for repairs after an unfortunate fire caused by illegal occupants of its underbelly weakened the slabs at the Leventis end of the bridge, according to Adebiyi.

“Some of our citizens live under the bridge illegally and carryout a lot of commercial activities and they do sales of petroleum products, and in the process, there was fire outbreak which became so severe that it affected the structural integrity of this bridge and a section started failing,” the director said.

He appealed to those doing business under the bridge to relocate and that the appropriate law enforcement agencies would be contacted to enforce their evacuation and that barricades would be built to prevent reoccurrence of the unfortunate incidence.

He thanked Nigerians and the truck drivers for their patience and for cooperating with the government.

Also, according to the Federal Controller of Works in Lagos, Adedamola Kuti, Nigerians should expect a better flow of traffic on account of the reopened section of the bridge, stating that movement would be enhanced further with the repair of the expansion joints on the bridge.

He said: “The next project will be the repair of some of the expansion joints on this bridge that are already damaged and they will be maintained regularly.

Coconut bridge expansion works; Ijora/SevenUp bridge and now we have done the Leventis bridge. Work is ongoing on Alaka bridge in Surulere and on Third Mainland bridge. Repair works are ongoing on several roads in Lagos, such as the Lagos-Ibadan; Lagos-Ota-Abeokuta; and Ikorodu-Sagamu.

President of the Container, Truck Owners Association, Alhaji Wasiu Oloruntoyin, lauded the federal government for rehabilitating and reopening the bridge, but appealed that the other section leading through Tin Can to Mile Two should be rehabilitated to ease evacuation of goods from the ports.

The government team also visited the trailer and truck park at the Liverpool-end of Tin Can road, promising to put the 350-capacity facility to use by the end of March this year.