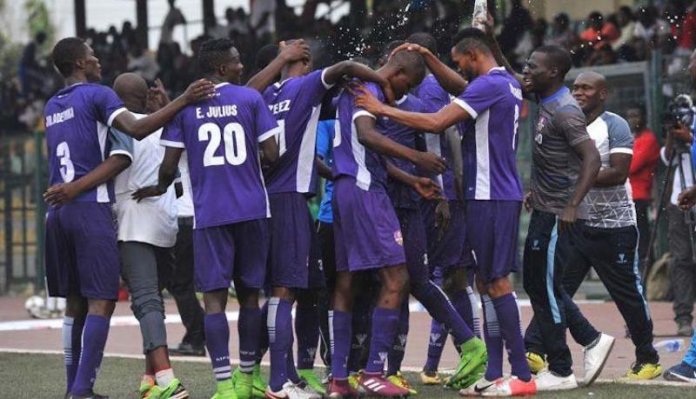 MFM FC continued their stay at the top of Group A of the Nigeria Professional Football League (NPFL) Wednesday with a 1-0 away victory recorded against Remo Stars.

Elsewhere in Port Harcourt, Rivers United dropped points for the first time at home in a goalless draw against a dogged Kwara United at the Yakubu Gowon Stadium.

In Group B, FC Ifeanyi Ubah leapt to the top of the table with 14 points from seven matches, two points clear of previous leaders Heartland, while Gombe United drop to the bottom of the section on five points.

The Rivers United Technical Manager, Stanley Eguma, made four changes to the side that lost 0-2 in Aba to Enyimba on Sunday with big striker, Osita Chikere, the biggest name to miss out.

The hosts dominated from the off and should have taken the lead in the ninth minute when marauding left back, Konan Ruffin bombed forward to deliver a brilliant cross to Waheed Adebayo who somehow failed to connect from three yards.

Clear cut goal scoring opportunities were at a premium but the hosts came extremely close to breaking the deadlock in the 76th minute when second half substitute, Bright Onyedikachi walzed his way through the penalty area and delivered a brilliant cross which Wasiu Jimoh just about failed to reach.

Nelson Esor went down under a challenge from a Kwara United defender and the hosts were convinced they had won a penalty.

Today, Bendel Insurance will test their might away against Katsina United while Enyimba will be on the road to Bauchi to confront Wikki Tourists.

Niger Tornadoes who are without Coach Bernard Ogbeh will be home against Sunshine Stars while it will be ‘Plateau Derby’ as Plateau United and Nasarawa United battle for the three points at stake in Lafia. The last game of the Match-day 7 is between Yobe Desert Stars and Akwa United in Damaturu.