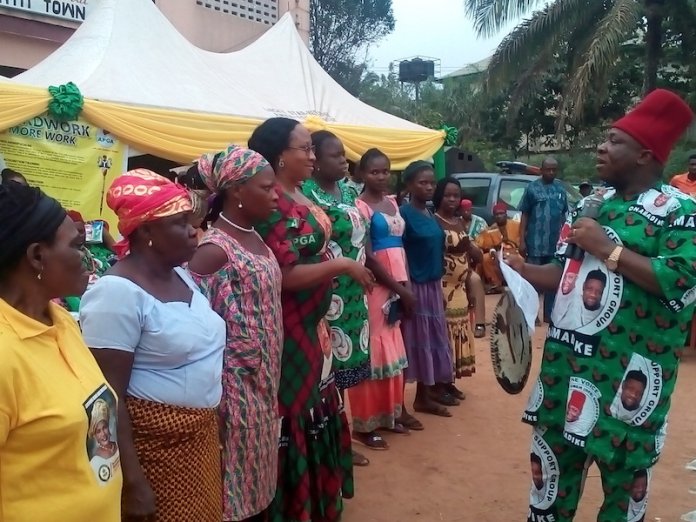 In fulfilment of his pledge, Senator Victor Umeh, representing Anambra Central Senatorial Zone, has empowered 170 indigent women in rural parts of Anambra State with N50,000 each to start up or support their businesses. The senator who choose between six to eight indigent women in 30 communities where he visited to canvass for votes said the funds would help them support their small businesses or even start new ones to support their families.

Umeh said the initiative was to support at least six indigent women in every community of the 58 communities that make up Anambra Central senatorial zone. In Akwa Ukwu community of Idemili South Local Government Area, where the senator began the empowerment, a 70-year-old woman, Madam Patricia Uzochukwu who is known in the community as a broom maker said with the money donated to her by the senator, she hopes to expand her business.

She told THISDAY, “I make brooms, that is what I am know for in this community. I make it, and one of my grandsons takes it round the community in a wheel barrow. I have been using it to help myself and even train my grandchild in school, and now that I have received empowerment, I may consider expanding my business.”

Uzochukwu said she usually approaches palm wine tappers who help her with palm fronts, while she usually buys rubber and other plastics, which she uses to bind the head of the broom for use after processing it.

“With this funds, I can now buy more rubber because it is the only thing I usually buy in my business. Every other thing depends on my expertise. I am very grateful to Chief Victor Umeh for doing this.”

Umeh said all the 58 communities in the central senatorial zone of the state would receive similar empowerment, and that would bring the total number of rural women empowered to about 350 women.

“Empowerment remains my major reason for going to the senate, and I will continue in that line. I have over 300 students of various universities on my scholarship scheme, and through the National Directorate of Employment(NDE), we have trained and distributed starter kits to 151 trainees. We have also distributed 35 tricycles to youths on various communities in the zone, that is what we call empowerment.

“I have several projects that are in the 2019 budget for the people of the zone, and once the implementation starts, people will see my handwork. I have done all these within just one year of being in the senate, so you can imagine what the people will benefit when we get the chance of a full four-year term? That is why I am here to beg for your votes,” Umeh told the people.

For many, Umeh has lived up to expectations given his drive to empower the youths in his constituency. During his campaign in 2015, he had promised among other things to use his position as a member of the National Assembly to empower youths of his constituency. In several places where he took his campaigns to, Umeh stated that as a legislator, he may not exactly have the resources to embark on project execution, but with quality representation, he would be able to attract from the federal government, its agencies and parastatals empowerment kits, which would engage the youths and keep them away from vices.

His hopes were dashed when after the elections, Mrs. Uche Ekwunife was announced as the winner of the Anambra Central Senatorial Zone election. But in January 2018, Umeh got his chance when he won the rerun election overwhelmingly and was sworn in.
Within 10 months of settling down at the National Assembly, Umeh has provided serial empowerment for youths of the zone, ranging from trainings, scholarships and disbursement of tricycles and others. Recently, the senator who is popularly called Ohamadike, empowered and distributed starter kits to 151 trainees at Neni, Anaocha Local Government Area headquarters in the state , which he attracted from the National Directorate of Employment (NDE).

On the empowerment scheme, 151 persons were trained by him and empowered with N4million, but beyond these, the Central Bank of Nigeria (CBN) will empower them with N1million to N10million loan, which they can accessed as far as they are one of those that have been trained by NDE. The CBN will provide them with the equipment for the business.

Umeh also at a different events awarded scholarships to 70 indigent undergraduates in his constituency- 10 each from the seven local government areas that make up the senatorial zone.

Meanwhile, one of the many empowerment schemes carried out by Umeh was by empowering his people with transport business. During the recent disbursement of 34 tricycles attracted by him to youths of the area, Umeh said he had to move immediately he learnt of the empowerment which has already been received by other lawmakers.