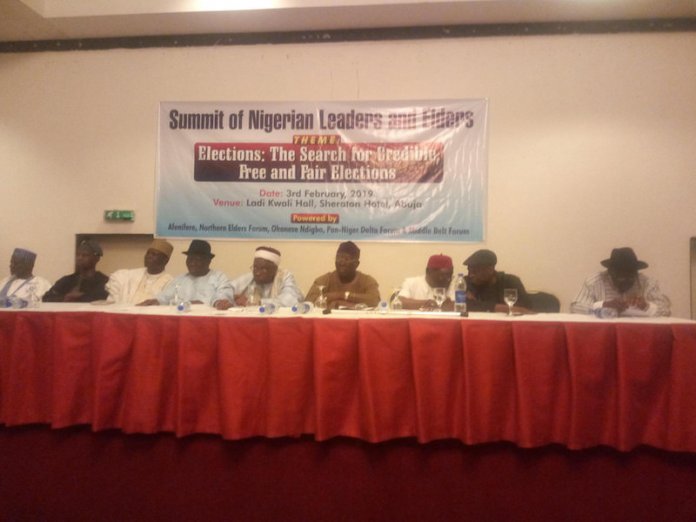 Less than two weeks to the presidential poll, a forum of Nigerian leaders and elders yesterday resolved to back the candidacy of Alhaji Atiku Abubakar of the Peoples Democratic Party (PDP).

The third edition of the Summit of Nigerian Leaders and Elders with the theme: ‘The Search for Credible, Free and Fair Elections,’ which took place in Abuja, had in attendance the Chairman of the Northern Elders Forum (NEF), Prof. Ango Abdullahi; Leader of Pan-Niger Delta Forum (PANDEF), Chief Edwin Clarke; Leader of Afenifere, Chief Ayo Adebanjo; President of Ohanaeze Ndigbo, Chief John Nwodo; and President of Middle Belt Forum (MBF), Dr. Bitrus Pogu.

In a communiqué issued at the end of the five-hour summit and read by the spokesman of Afenifere, Mr. Yinka Odumakin, the leaders emphasised that they adopted Atiku as the consensus candidate for the office of president “as he has demonstrated the deep understanding of the critical needs of the country at this time and possesses the capacity to proffer clear solutions in that respect.”

They, therefore, called on all Nigerians, irrespective of religious or ethnic background to stand in unison and vote for Atiku on Saturday, February 16 and ensure that they defend their votes.

The leaders stated that they settled for Atiku because he has a clear understanding of the nation’s security challenges and a strong will and commitment to tackle them decisively and comprehensively as “he is also capable, intelligent, physically and mentally alert person that will once more restore Nigerian international standing and respect.”

The forum noted that several of the younger candidates, who presented themselves for the presidential election, demonstrated great capacity and promise to lead this country creditably and ensure that it engenders proper social and economic development to its people.

“However, most of these qualified younger candidates do not, at present, have the machinery and structures to win a presidential election in Nigeria at present,” the groups stated.

According to the communiqué: “Having closely followed the competition for mandates within the various political parties as well as the campaigns for the votes of Nigerians so far, including four weeks of close interactions and interviews with nearly all the aspirants for the position of the President of the Federal Republic of Nigeria in the various parties, we make the following observations:

“The forthcoming elections are vital to our desire to live together in a democratic nation that reflects our aspirations, of peaceful co-existence, mutual respect, practice of true federalism.

“There is assurance from INEC of its willingness and ability to conduct free and fair elections, but it must be watched very closely and supported to set new, higher standards in election management and that undue pressure from any quarters does not truncate its efforts.”

The groups explained that political and security environments are central to the conduct of credible and peaceful elections, saying so far, the pronouncements of major contenders regarding the use of violence and willingness to accept outcome of credible elections is being severely tested in practice.

They said the disposition of state agents that have responsibility for securing the votes has also been a major source of concern.

They stated further: “Civil society in Nigeria and the international community have made commendable contributions towards improving the integrity and security of the ballot. It is vital that they continue to play the roles of informed vigilantes and partners in our nation’s search for deeper roots for our democratic traditions.

“The media need to do more to meet the expectations of Nigerians in terms of objectivity and capacities to set agendas and exercise effective oversight over all matters related to the forthcoming elections. The Nigerian media has a rich history of rising to the occasion when the country faces the kind of situation we are in today.

“These last few days before the first set of elections will test the federal government’s undertaking and assurances to protect Nigerians as they prepare to participate in the elections, as well as create a level playing field for all parties and candidates.”

They advised the federal government to ensure that no one, no matter their roles or status should be allowed to behave as if there are no consequences for subverting the electoral process or threatening the rights of all Nigerians to participate in free and fair election.

The leaders also expressed their goodwill towards Vice President Yemi Osinbajo, “for surviving a helicopter crash on 2nd February, 2019”.

The communiqué further noted the continued drift of the country in the direction of insecurity, deep divisions, tyranny as shown in the recent unilateral suspension of the Chief Justice of Nigeria, Justice Walter Onnoghen, against all globally known democratic ethos.

Meanwhile, Atiku Abubakar and his party have described his endorsement by the groups as a loud statement that there is hope for Nigeria.

Atiku in a statement yesterday said that the endorsement has buoyed him to lead a Pan-Nigerian team that would give practical interpretation to what has been done by the time he takes leadership of the country, by the grace of Allah, on May 29, 2019.

He stated: “I am moved to tears that in the midst of deep divisions and deliberate use of instrumentalities of state to set our people against themselves in the last three and a half years, responsible and respected leaders across Nigeria have agreed to come together for the purpose of endorsing my candidature for the February 16, 2019 presidential elections.

“The endorsement by the leading lights of our nationalities – Afenifere, Ohanaeze Ndigbo, Northern Elders Forum, Pan-Niger Delta Forum and Middle Belt Forum is a loud statement that there is hope for our country as we go to the polls in a few days.

“Today, we put aside all our prejudices to elect a president with religion and ethnicity playing no role in our elections. I profusely thank our leaders across the country who have created this wonderful moment for us to come to the table of brotherhood. Once again, and in the words of our old National Anthem, we can proudly sing: Though tribes and tongues may differ, in brotherhood we stand.”

The former vice president assured the leaders that he would run a properly federated Nigeria through constitutional reforms to bring out the best from all sections of the country to make Nigeria work again like in the past when the Saudi Royal family came to Nigeria to access Medicare.

Atiku said: “Many countries of the world have been led into disintegration by strongmen (one in each country) and we have seen how individuals who understand the management of diversities have rallied their people for unity. I have been chosen to unite our people and exactly that I will.

“I enjoin our people across Nigeria to come out en-mass to vote on February 16 to pull our country from the brink and propel it to greater heights so we can live a better life. Take my words as a covenant with Nigeria.”

At a different press conference yesterday, the spokesman for PDP, Mr. Kola Ologbondiyan, also commended the groups for the endorsement, saying they have put the national interest above their personal interests, adding that history will be kind to them.

Gang up against Buhari will Fail, Says Presidency

Reacting, the presidency last night said that the gang up against President Buhari would fail.

Senior Special Assistant to the President on Media and Publicity, Malam Garba Shehu, in a statement, added the PDP was hiding under the cloak of ethnicity to avoid imminent defeat.

According to him, the current scenario is a replay of what happened in 2015, which he said failed to stop Buhari from winning the election.

The statement read, “The PDP is hiding in the bunker of ethnicity to avoid their inevitable defeat but that won’t change anything. The current scenario resembles efforts to stop Buhari in 2015 by the same characters. It is an effort to repeat the old experiment that failed in 2015.

“They failed to stop him from coming to power in 2015 and they will fail yet again on February 16. If all these groups are ganging up against one person, that is President Buhari, it tells you who is the formidable candidate in the election. This gang up they forged, one more time will change nothing. It is for the people to decide.”

But in a statement by the Director of Strategic Communications of the APC Presidential Council, Mr. Festus Keyamo, SAN, the Buhari campaign dismissed the endorsement and recent favourable ratings of Atiku as voodoo and fraudulent, saying its candidate is primed to win.

According to the party: “As regards the endorsements by the above-named socio-cultural groups, there is no fraud bigger than that of known PDP members and/or hardened PDP sympathisers wearing the apparel of socio-cultural groups, purporting to represent entire regions and endorsing their own political party.

“The impression given through these endorsements that PDP is expanding its support base is also an attempt to deceive Nigerians because these are groups that supported PDP in 2015 and lost the election along with PDP.

“Therefore, their excuse that they are supporting Alhaji Atiku Abubakar because of the bogey called ‘restructuring’ is nothing but a subterfuge. In any case, Ohanaeze had said in its earlier release that the first reason they are endorsing Atiku Abubakar is that his running mate is an Ibo man.”

It said the leaders purporting to lead the peoples of the region missed the point that Buhari had managed to navigate his way directly to the masses, who they purport to represent, and that he is ensuring that the dividends of democracy reach the people directly.