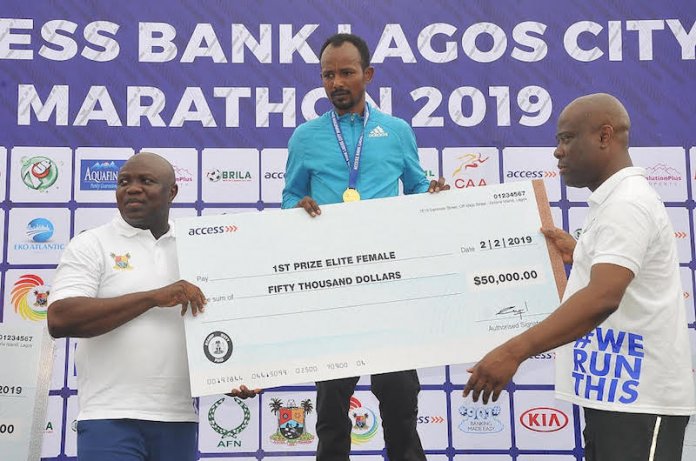 Ethiopians Suntayahu Legese and Dinke Meseret were the hero and heroine of the day as they came top in both male and female events of the 2019 Access Bank Lagos City Marathon held yesterday.

It was the Ethiopia show in the keenly contested female category of the marathon as the first three positions went to Ethiopian athletes.

While presenting the star prize of $50, 000 to the male winner, Governor Akinwunmi Ambode praised all the athletes for putting up a good fight in the race and said it was keenly contested. He assured that the race has come to stay in Lagos State.

Amobode also expressed appreciation to the management of the title sponsor, Access Bank and other co-sponsors and partners for making the race a reality.

Meanwhile, Nigerian female athletes that participated in the 42km and 10km races protested the results announced by the organisers.

According to the athletes, they were denied their hard won victories at the race and complained openly and bitterly.

“This is terribly bad. We were denied our hard won victories and we will not accept it,” said one of the aggrieved athletes.

However, General Manager of the race, Yusuf Alli, said the athletes were technically deficient and that affected their result. Alli however said the organisers will look into their protests.

It was also observed that the commemorative medals for all the participants that finished the race were inadequate as most of the runners complained openly because it was a carryover of what many of them went through last year.

“I ran the 40 km race but I’m lucky to be given a medal meant for 10 km runners. What about others in my category that did not even get anything,” a marathoner consoled himself yesterday.

Top Nigerian artists led by D’banj, Teni and Olamide thrilled the crowd with some of their popular tracks before the presentation of prizes.