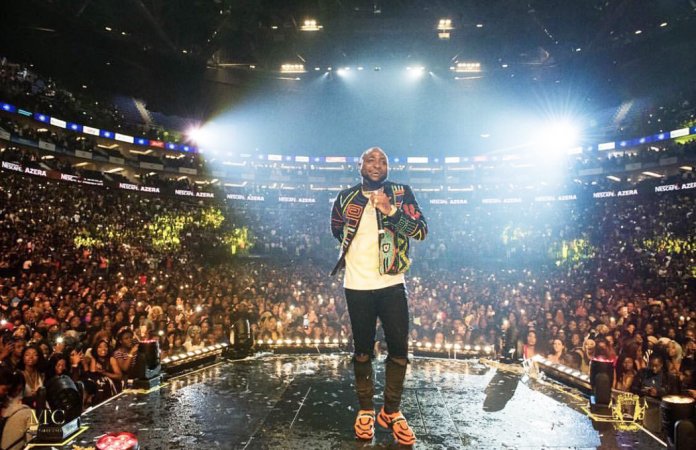 With this feat on Sunday  January 27, 2019, the Afropop star David Adeleke, popularly known as Davido, joins the likes of Drake, Rihanna, Kanye West, Adele, Celine Dione, Britney Spears, Justin Timberlake on the list of international artistes who had sold out the UK venue as headliners. He also becomes the second African musician, after his fellow Nigerian Wizkid did and whom he credited his inspiration to sell out the 02 Arena.

Just about his winning streak last year, recall that the multiple award-winning artiste carted laurels in major awards at home and abroad, starting with the BET (Black Entertainment Television) Awards as Best International Act 2018; was the biggest winner at AFRIMA 2018 in three major categories and the Best Afropop Male Artiste at the Nigerian Entertainment Award. The chain of success he pulled through the New Year, believably leaving one to remark that “The year not even started and we already have the show of the year. #DavidoLiveat02.

Davido had taken to Instagram to hype the show a fortnight ago. He wrote: “For me, it’s about always elevating the movement with every step taken! January 27 will be historic! Queen Elizabeth herself go know say we dey town! Don’t hear about it be a part of greatness! #DavidoLiveat02.” This he lived up to it with the record event and his grand performance trending while the event was on. Social media users from Nigeria, London, and some other parts of the world were thrilled by Davido’s performance as they shared photos and video clips from the concert.

One of the highlights of the show was the moment Chioma, his girlfriend, got on stage as he sang the song he dedicated to her “Assurance’’. As usual, the twosome cared less as they locked lips. The crowd, who were familiar with his lyrics, sang loudly to everyone, creating a charged atmosphere with an energy matched by Davido’s energetic set. Another was his arrival on the stage. The DMW boss was remarked to have made an epic entrance arriving on a suspended platform to rapturous applause from the waiting crowd at the famous 02 Arena, venue of the concert in London.

After a brief delay, Idris Elba, an English actor, producer, musician and DJ, who was a special guest at the show, took to stage to introduce ’30 Billion crooner’, who came in and set the night rolling with one of his hit songs, ‘Aye’. Elba described him as one of the biggest acts out of Africa. The singer earned hundreds of accolades for putting up a spectacular performance that reaffirmed his status as one of Nigeria’s biggest musical talents.

The man the audience had gathered to watch and in true superstar fashion, backed by the composers live band and his colourful dancers, Davido’s stage prowess outshone any expectations that those who gathered might have brought into the Arena. Performing a familiar set-list of his large catalog of hit anthems including songs like ‘Dami Duro’, ‘FIA’, ‘If’, ‘Fall’,  Davido served off back to back bangers during his over set. There were also a few surprise appearances from music stars who joined Davido on stage including the likes of Jamaican superstar, Popcaan and Nigerian artiste, Zlatan.

Hosted by Shopsydoo, ‘Davido Live at The 02’ was opened with sets from various DJs including Tim Westwood, DJ Ecool, DJ Bibi, and DJ So Good. After came performances from members of his DMW crew, including Mayorkun, Peruzzi, Idowest, Dremo, and Yonda. Wave making artiste and new sensation Victor AD, who just released a song, titled ‘Tire You’ featuring Davido, also performed. With his support of a number of talents on his platform and on stage his biggest night, he was yet again true to his words and slogan that proves “we rise by lifting others” which has defined Davido’s blueprint over the years.

This was one concert that he had long prepared for, one he had long wanted to accomplish and the night came to its close glamorously with Davido looking upon the 20,000 crowd as they screamed loudly to his name. Having etched his name in the history books selling out the iconic O2 Arena and highlighting a vivid indication of his increasing dominance on the global scene, the much-anticipated concert indeed was how he had pictured it, perhaps even better.

While a number of Nigerian artistes have in the past performed at the smaller O2 stages, Wizkid remains the only one to have taken on the main 02 stage and successfully sold out his AfroRepublik concert in 2018. Davido had not only sold out the O2 Arena, but he had also left his mark at the historic British venue, attracting Edward Enninful, Editor of British Vogue and supermodel, Naomi Campbell who came to support the Nigerian Afropop star.

After the concert, fans of Davido and Wizkid continued the superiority battle in the social media. These are some of the remarks:

“Mygoodness!! King @iam Davido is trending in Abuja, Lagos and London!!! three placess!! I thought @wizkidayo fans said he is not trending?? God will continue to put y’all to shame!!! #davido #wizkid #davidoliveathe02. Davido has become the youngest and second African artiste to sell out the world’s busiest music arena, 20,000 capacity 02 Arena after Wizkid. Here was him in June 2018, saying he got the inspiration to sell out The 02 after ‘his brother’, Wizkid did so.

“Don’t hate on Davido because you are a wizkid fan. Be happy for him, the nigga is winning, we Nigerians are winning in this music industry #davido #DavidoLiveAt02 #DavidoLiveinConcert #Davido who got the better concert at the 02, Davido or Wizkid? Yunno as a wizkid fan, I’m not bothered, I’m happy for David; wizkid paved the way for him to see this was possible so we be pace setters and I know wizkid would do something very mad to shut everybody up; let’s enjoy the show ladies 20,000 people have come out this evening to watch him sing. It’s Sunday. Tomorrow is work and school day. Six years ago, Davido was playing to a 600 crowd in London.

“Wizkid fans daily prayer is to see #Davido fall, but Davido keep showing them it did not only happen in the Bible, e go happen for real life too. According to the biggest online music streaming site in the world, SPOTIFY, king @iamDavido is the first African artiste to solely headline a sold out show in the most popular music arena on earth, the 02 Arena…chee! @wizkidayo cannot reach this level! #davido #wizkid #CRYTOT”.