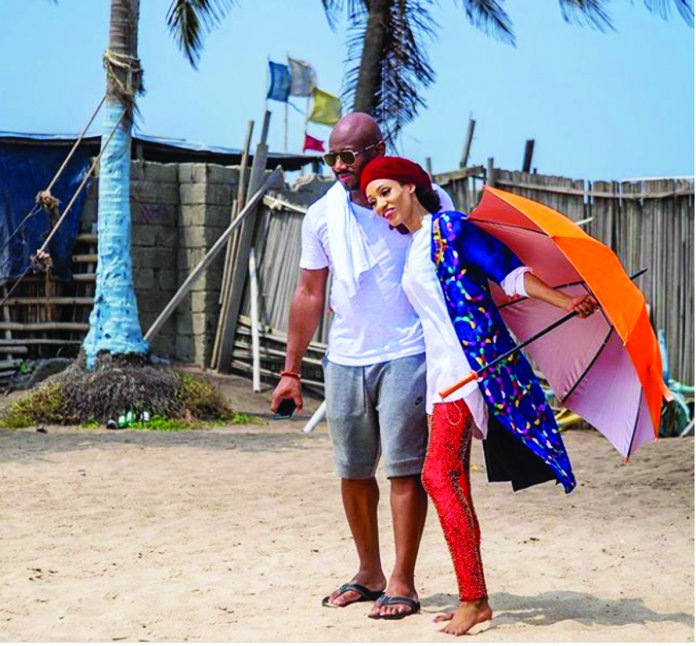 Mavin act Di’ja, real name Hadiza Salma Blell, has been very secretive about her family since getting married. The artiste finally showed off her husband as they both hang out at an unnamed beach on Wednesday. The couple were seen enjoying themselves and also with their children. The singer and mother of two shared rare photos with her husband, simply known as Rotimi as they stroll together at the beach.

The Mavin Record star in one of her posts attached to the pictures said: “Because life is about the love you make. Together we make our favourite people.  #partneringeverything.”

She got married in 2015 at a very private wedding. This was just about a year after she started dating her hubby in 2014. For a very long time, no one knew Di’Ja was married or anything much about her personal life, which for many people was a pleasant surprise. The couple had their first child in 2016.

The Singer welcomed her second child, a baby girl in March 2018. Announcing the arrival of the baby then in heartfelt Instagram post, the Mavin princess wrote: “My mother is God’s gift. #Grandma and her grandkids. Wow I now have two children now (a boy and a girl). Alhamdullilah. Ubangiji Allah sai Godiya. I’m the happiest woman alive. God bless my husband, mother, father, and my brother and his family @msfaddy..heck my whole family! My daughter came on 9th March 2018.”

Unlike many artistes, Di’Ja’s commitment to academics earned her a double bachelor’s degree in Psychology and Biology. After which she found passion in music and philosophy. She is not just a singer, but also a visual artist, songwriter, and fashion designer. Her passion for music had something to do with her parents’ collection of old CDs; her mum especially and she thinks it’s innate. Her parents according to her are the amazing people who contributed in shaping who she is today through the upbringing they gave her. She says her childhood was colourful, which has translated into her life always being colourful.

Di’Ja lived in Nigeria, Sierra Leone, and the United States and in Canada where she released some of her songs. Her music career started in 2008 and in 2009, she released her first single “Rock Steady”, which was nominated for Best Urban/R&b @ the 2009 Canadian Radio Music Awards. She had also won the Best New Artiste award at the 2008 Beat Music Awards which was quite a boost to her career back then in Canada. She performed as one of the opening singers for Akon’s performance at the Sierra Leone’s 49th independence anniversary celebration and in 2012 and 2013, released several singles including “Dan Iska (Rudebwoy)”, “Hold On (Ba Damuwa)” and “How Can We Be Friends”.

The beautiful Di’Ja came into limelight when she met music producer Don Jazzy in 2014 through her manager. She says she didn’t expect to meet the Nigerian music producer. She had met Jazzy while she was in the studio sharing her songs with some of the guys around when the Mavin Record label boss walked in. That experience she acknowledged as, “both exciting and scary.” Don Jazzy listened to two of her songs, which set both together musically.