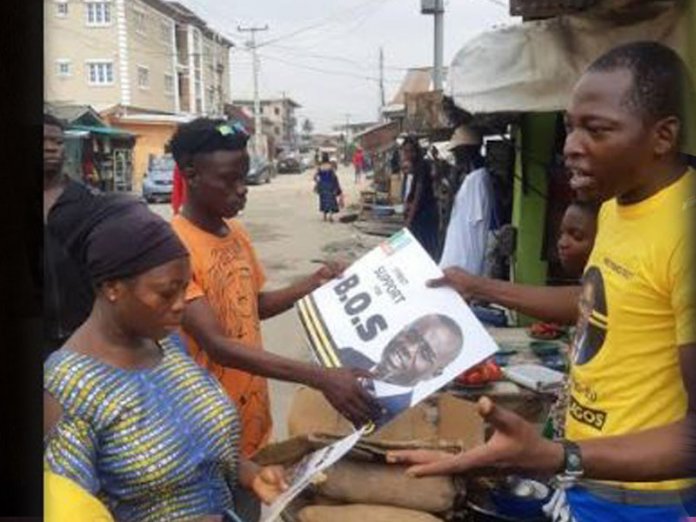 Little drops of water they say makes a mighty ocean. As cliche as this might sound, it has been proven nonetheless, especially with the forthcoming elections in view. Thus, as the race for who gets to be the successor to Governor Akinwunmi Ambode of Lagos State heats up, many groups have since sprouted up to push for the candidacy of their respective candidates.

However, one group stands out- the Street Voices Initiatve, a platform that is solely focused on giving a voice to the voiceless in all communities across the state. Championing the Babajide Olusola Sanwo-Olu Your Street, with the hashtag #BOSYourStreet, initiative is tailored towards appearing on virtually all streets preaching the gospel of Sanwo-Olu, who is the All Progressives Congress (APC) Gubernatorial candidate for Lagos State.

The group’s philosophy is driven by the desire to sustain the enviable development trajectory that the state has enjoyed since 1999, which they opined would continue given Sanwo-Olu’s experience in public service as an invaluable prerequisite for handling the intrigues of governing a cosmopolitan mega city like Lagos.

Armed with campaign materials, the train has been seen in visually all parts educating people on the objectives and core derivatives of Sanwo-Olu and the reason why he is the best man for the job. Their target is not just the artisans, residents of local communities, the traders, the business person, conductors, commercial motorcyclists and in general, the common man, but also well-meaning, upwardly mobile, working class people, and students, who run away from campaign grounds on the premise that there is normally violence.

Thus, the #BOSYourStreet is a youth support initiative of Street Voices Nigeria, a platform for the community’s voiceless in order to encourage youth participation into the all inclusive government of Babajide Sanwo-Olu in realisation of a 2019 electorial victory.

At most, it can best be described as a movement- from Lekki to Gbagada, FESTAC Town, Mile 2, Lagos Island, Somolu, Ajegunle, to Surulere; the initiative is already gathering momentum and the train seems not to be letting go anytime soon.

Just last week Sunday, the train stopped at Masha, Kilo and some other parts of Surulere. For the group, the beautiful thing about their campaign is that they decided to blow the trumpet of Sanwo-Olu having seen his capabilities and set objectives for the state.

That Sunday, the streets were agog in several locations simultaneously as Street Voices, an initiative of communications strategist, Razaq Ivori, stepped out to campaign and share branded items in support of Sanwo-Olu, to voters who do not ordinarily participate in campaigns for several reasons.

Street Voices, which has a concept reminiscent of a voicebank that collects voices of concerned individuals to loan out to fast-breaking public issues made quite the spectacle in locations like Surulere, Ikeja, Somolu, Lekki, and diverse locations.

THISDAY gathered that Ivori, with this initiative simply tries to attract those voters who never come out to campaign grounds; who see campaign grounds as a violent place where people fight and shoot guns.

“A lot of well-meaning, upwardly mobile people, working class people, and students run away from campaign grounds where there is normally violence. Most of these people are indoors and undecided in their voting decisions until the final hour. So I designed BOSYOURSTREET to cater for such people.”

On how the initiative works, Ivori explained, “It is on social media. BOSYOURSTREET starts with the advertisement on social media platforms like Facebook and Twitter. We tell people that if you wish to campaign for Sanwo-Olu on your own street, your own personal campaign, then we will come to you.

“The definition of BOSYOURSTREET is actually self-campaign. So if you wish to do a self-campaign or selfie campaign, all you need to do is retweet the post on BOSYOURSTREET, share it, and you will be provided with brand items to campaign on your street.

“Presently, we have received over 7000 retweets and request for brand items. Some came from Surulere, some came from Ikeja, some from Somolu and other areas of Lagos.

“So the team splits ourselves, calling these people who provided their numbers after we made contact and started dividing Tshirts and other campaign materials to them. It has actually become a street slang where you have young people asking each other, ‘have you BOSed your street?’ The idea is that Sanwo-Olu is coming with a beneficial package once he gets in.”

Diabusing every nation that he was in this for political gain, Ivori said: “I am just the founder of Street Voices, which is like a voicebank where people loan their voices for different kinds of causes. Babajide Sanwo-Olu campaign is just one of those causes. Street voices initiative has been on for about eight months now, and in that time, we have done some successful campaigns. The Sanwo-Olu one started about a month ago.”

As expected, most people the train met on the streets had one or two advice for Sanwo-Olu. While some urged him to bring the same energy and zeal used in campaigning to enhance governance, others charged him to stay available if he enters after elections.