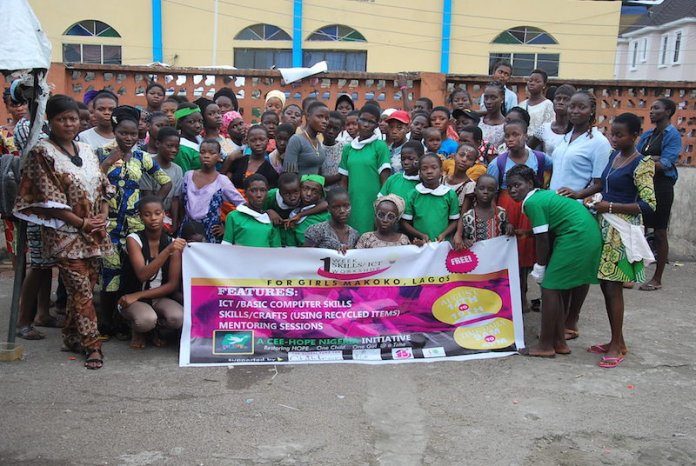 Funmi Ogundare writes that despite the harsh environment of Makoko, a slum in Lagos, the Centre for Children’s Health Education, Orientation and Protection, an advocacy group committed to girl-child education is empowering the girls through scholarships, mentorship and training to enable them succeed

Miss Oluwatosin Ayomikun, 15, is a student of Nawarudeen Senior High School, Fadeyi, raised in Makoko, a slum in the centre of Lagos State. She lost her mother when she was only nine months old and was abandoned by her father. She was raised by her grandmother who feels that after her secondary education, she should either be married off or just learn a trade.

While she was in senior secondary one (SS1), Ayomikun had issues with her former Mathematics teacher, who wanted to have an affair with her; her refusal to yield to his love advances made him score her low in the subject. She had to repeat the class because Maths is a requisite subject for promotion into the next class. However, nothing was done about her plight even after reporting the issue to her class teacher at that period.

Titilope Ajimuda, 19, is another girl who grew up in Makoko. She has been able to brace the odds despite the kind of environment she grew up in.

Apart from her academic excellence, she has, like many other girls, acquired several skills to ensure her independence and thrive in a brash environment. She graduated from a 10-month advanced training in cosmetology (makeup, special effects, fantasy, carnival, facials, pedicure/manicure specializations) from the Chinwe Angelic Touch Centre at Isolo, Lagos.

Ajimuda has just secured admission into the Ondo State University to study Guidance and Counselling, an inch closer to her ultimate dream of becoming a lawyer to fight for her community held long in the throes of government’s suffocating neglect, marginalisation, aside living constantly under the threat of demolition.

Ayomikun and Ajimuda are some of the girls empowered through scholarships, mentorship, training and ICT programmes by the Centre for Children’s Health Education, Orientation and Protection (CEE-HOPE), an advocacy group committed to girl-child education.

At the beginning of every school year, the centre, founded by Betty Abah makes it a point of duty to visit different communities in Makoko to award scholarship which covers, their textbooks and note books, uniforms, shoes, and class projects to the girls, as well as mentor them to greatness.

Abah told THISDAY that in the past one year, the centre has empowered about 1,000 children, among whom are 500 girls educationally who have been coming for its programmes in Makoko communities.

Speaking on the selection criteria, she said they are selected based on the types of empowerment such as general empowerment, educational empowerment, mentorship programme, as well as those who are meant to be on full scholarship, mostly targeted at adolescent and teenage girls.

Asked why the focus is on the girls, she said: “In an impoverished community like Makoko, there is high level of illiteracy and with illiteracy comes ignorance. Also there is a lot of adherence to traditional beliefs, which most times are very retrogressive, conservative and patriarchal.

“A lot of attention if at all is on the boys, girls don’t really matter much. For many average parents in a community like this, the highest the girls can attain is to be married off. In terms of empowerment, their ideas are only tailored towards the girls learning tailoring and hair dressing, so not much thought is given to education and of course in a society where there is discrimination in educational empowerment on gender that kind of community cannot really do well. It is more like a community limping on one leg.

“We cannot really boast of a progressive society when the women are not empowered. When you have women that are empowered, you can be sure that the society is progressive because they are altruistic. So we felt we should consciously play a role in their empowerment. Fortunately for us, we have had some level of support from institutions and individuals for our educational programmes.”

Some of its beneficiaries over the years, the founder said, included teenage mothers, adding that some of the girls came from the water side.

“Recently, we started an after-school class on the water for the girls. The quality of the teaching is amazing; they teach them in the local Egun Language. Majority of them cannot speak English, they can only speak Egun and French so we reach out to them.

“The after-school classes that we have offer English Language and Mathematics aside what their schools provide for them, they are able to get better. Nigeria lingua franca is 100 per cent English, a language of instruction and communication. Teaching them English, is part of integrating them with the rest of the world. A community like Makiko is cut off from civilization, it is quite popular because of the demolition which drew attention to the rest of the world and because of its unique style of living,” she said.

She described Makoko as the largest slum community in West Africa with over 200,000 inhabitants, adding that thousands of children living there need help. Other states the centre work in apart from Lagos, Abah said include Benue and Plateau States. “One of our communities in Lagos is Monkey Village, a suburb in Ikeja, but quite unique and very much impoverished, we work with children there, we try to stretch our resources to help the girls in communities like this, there is so much ignorance and illiteracy.”

Miss Ayomikun, who has been on the scholarship for five years, was full of praises for the founder. She told THISDAY that her effort has impacted her positively.

“She has done lot in my life. Before now, I had no dreams, I lost my mum when I was nine months old and my dad is nowhere to be found. My grandmother has been taken care of me. I had always felt that after my SS3 examinations, I will not further my education, but ever since I have been on her scholarship, I have seen that without education, you are nothing, and a man cannot marry a woman without skills because he will believe that the woman should have something tangible to do.”

She stressed the importance of educating the woman, saying that without it, she cannot stand out. Ayomikun who aspires to learn a skill in hair styling, said she also intends to study Mass Communication and become a news caster

She advised the founder to “continue her impact on the girls, she has been supporting them with their school fees and mentoring them. Most of my mates who don’t have this kind of opportunity have fallen pregnant just because their parents are not giving them what they want, while the boys have taken to crime. She made me to understand that you need to secure a future for yourself and look beyond your environment. She has taken us to different outings and impacted me in a lot of ways.”

Miss Oluwatumininu Omosawe, a junior secondary two (JS2) student of Onike Junior Secondary School, Yaba, whose scholarship covers her textbooks and note books, uniform and school bag, expressed delight about the initiative, while advising the founder of the centre to keep up the good work.

Another beneficiary of the initiative, Miss Christiana Ijisan, an SS two student of Hebert Macaulay Senior High School, Yaba, who has been on the scholarship for two years, also commended the founder.