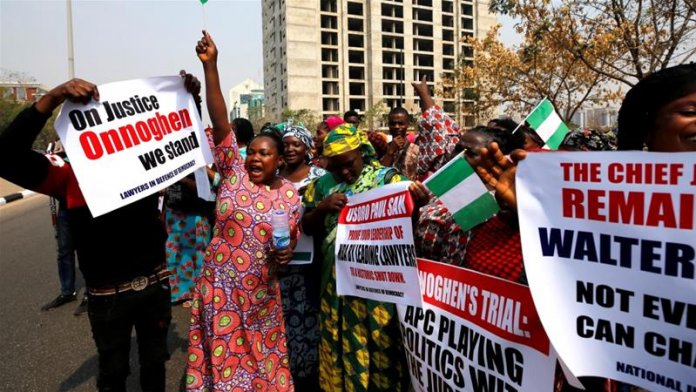 By John Shiklam in Kaduna
Lawyers in Kaduna on Tuesday shunned the courts  in  compliance with the directive of the National Secretariat of the Nigerian Bar Association (NBA) that they should boycott the  courts  for two days in protest against the unconstitutional suspension of the Chief Justice of Nigeria , Justice Walter Onnoghen, by President Muhammadu Buhari.
Our correspondent who visited the Kaduna state High Court Complex, observed that all the courtrooms were empty.
The Kaduna branch Chairman of the  association, Sule Shuaibu, and other senior members of the branch were seen going round the courts to ensure total compliance.
A senior member of the branch, Ifeanyi Egbuna, who was among the senior lawyers that monitored the boycott, told THISDAY that no lawyer went to court.
“Our chairman and some senior members of the branch went round the courts to monitor the situation and there was total compliance with the directives as no lawyer went to court” he said.
He added that days before the commencement of the boycott, the branch wrote to notify all the courts about the resolution of the NBA to protest the unconstitutional suspension of the Chief Justice of Nigeria (CJN), Justice Walter Onnoghen.