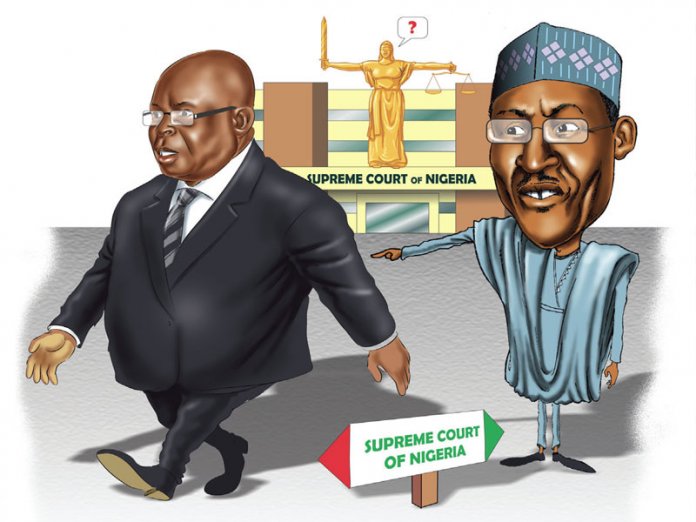 Democracy and the Rule of Law are hinged on due process. President Muhammadu Buhari is doing exactly the opposite in suspending the head of the judicial branch in a spite of the Constitution of The Federal Republic of Nigeria and taking Nigeria back to the ugly past of dictatorship a few weeks to national elections where the judiciary is one of the referees

What happened on Friday January 25th 2019 in the Executive Council Chambers of The Presidential Villa, Abuja, in the illegal suspension and replacement of the Chief Justice of The Federation is simply unconscionable and unacceptable in our system of laws and democracy.

While announcing the suspension of Justice Walter Nkanu Onnoghen as the Chief Justice of Nigeria (CJN) on Friday, President Muhammadu Buhari said Nigeria “…is a constitutional democracy and no one must be, or be seen to be, above the law.” Sadly, the president put himself above the law. He ignored the Court of Appeal ruling asking stay of action till it considers the issues next week; the president ignored the constitutional provisions on the removal of judicial officers and relied on a dubious exparte order of no known origin, signed by a CCT Chairman Danladi Umar who himself is under trial for corruption. For a president notorious for ignoring orders of superior courts to move swiftly to obey a dubious order of a tribunal beggars belief. No matter the gravity of the allegations against Justice Onnoghen, the recourse to self-help in dealing with the head of the judicial arm of government is more damaging to our democracy and the principles of separation of powers, checks and balances, and the cause the president claims to be fighting.

It is dangerous for our democracy that a president sworn to upholding the constitution would cynically disregard its provisions to achieve a predetermined end which many believe to be political and designed to confer advantage on the ruling APC and his presidential run – three weeks to the elections. In football parlance, it is like a team in a march suspending and replacing one of the referees in the game – INEC being the referee and the Courts being the second and third officials.

As the law stands today, the CJN can only be removed “by the president acting on an address supported by two-thirds majority of the Senate”. But Onnoghen has been removed under the pretext of an illegal suspension and, for all practical purposes, been pronounced guilty of an offence for which he has not even been tried or given fair hearing – a fundamental human right. The swearing in of Justice Mohammed Tanko as the acting CJN only heightens the ethno-religious suspicions that have dogged this administration.

But all is not too late to restore some order and constitutionalism. First the dubious exparte order must be vacated and Onnoghen restored as CJN. The Court of Appeals must then be allowed to consider the CCT case on its merits while an emergency NJC is convened to look into the allegations against Onnoghen with the CJN recusing himself.

Given the danger that corruption poses to our country, every right thinking citizen should cooperate with President Buhari to fight it. But such cooperation and buy-in should be nurtured and sustained through transparency and due process without ruling party sacred cows and opposition scapegoats.