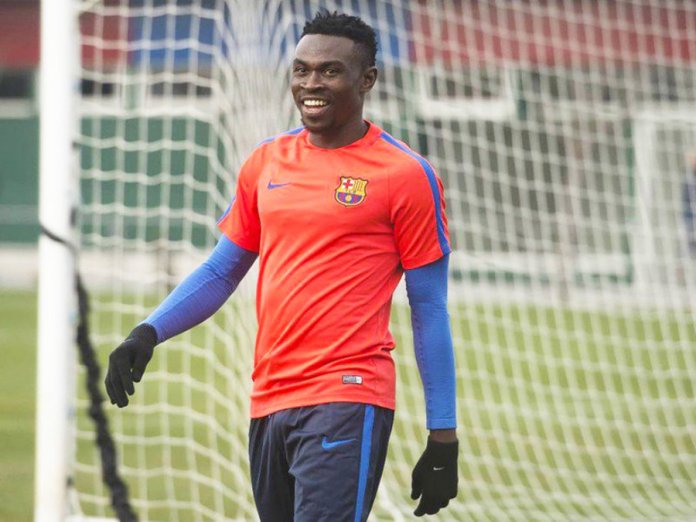 Ezekiel Bassey came to prominence after he signed a provisional two-and-a-half-year contract with the Spanish giants Barcelona from Enyimba FC of Aba. Though he was signed to play for Team B in the Segunda Lig, he had the prospect of training with the main team if he is able to impress. But it was not to be as it was a case of ‘Come Easy, Go Easy’. He was quickly shipped back to Nigeria after failing to meet the cut. That did not, however, deter his ambition to ply his football trade outside the shores of Nigeria, as he on Monday moved to an Egyptian side, Al Masry SC

In 2017, the Catalan club announced on its official website that it has snapped up the Nigerian forward Ezekiel Bassey until the end of the season with a further two-year extension option at the end of his current deal.

“FC Barcelona and Enyimba Football Club have reached an agreement for the transfer until the end of the season of the player Ezekiel Joseph Bassey for Barça B, the agreement includes a purchase option for two more seasons,” the club had said on its official website then.

His performances in test games, however, failed to convince the coaches of the Barcelona B team. “Bassey’s loan deal is over, he is so unlucky to be ruled out of the season after picking up a shoulder injury. The injury was thought to be a minor one but scans showed it was worse than initially feared,” his intermediary said.

Former Super Eagles attacking midfielder, Mutiu Adepoju, however, stated that Bassey couldn’t get things right when he moved to Barcelona due to lack of goal setting, saying the former Enyimba player got carried away and lack of discipline also played a role in the unfortunate situation that followed the move.

Bassey on Monday penned a three-and-a-half-year deal with Egyptian club Al Masry SC in the ongoing January transfer window, while he revealed he is already looking forward to getting down with the rest of the squad.

“Personally, I’m happy with the transfer. I feel great to have joined one of the biggest clubs in Egypt. It’s a good move for me and I can’t wait to get started,” Bassey said shortly after his unveiling.

In a chat with THISDAY, Head Coach of Barcelona Football Academy-FCBESCOLA, in Lagos, Bernal Villa, said in as much as he agrees that there are a number of talented players in Nigeria, for them to make it to Barcelona team, they must first understand the club’s philosophy and be ready to work very hard.

“It’s not just about having the natural talent. Since my arrival in Nigeria, I have seen a lot of good players that are on very good level. But the most important thing is for these players to be in good physical condition as their counterparts in Europe and if they can understand how we work and train at Barcelona, which is our methodology, in few years, some of them can make it to good clubs in Europe and eventually their national team,” Villa said.

Asked what about the major difference between an average Nigerian player and their European counterparts, Villa said: “The kids here are more of individual players, though they have good skills but they have problems technically and collectively. They are too individualistic; they always think they can take on their opponents and go alone with the ball and finish the ball by themselves. We have to make them realise they should play with the team.

“It’s not enough to be unveiled by Barcelona because that is when the real work begins. It’s not the time to shout hurray and go to sleep. It is the time to prove you can learn and adapt fast to the club’s philosophy, which is the bane of most Nigerian players have come across.”

Recalling his time at Barcelona to THISDAY, former Nigerian international, Gbenga Okunowo said a player’s ability and composure with the ball are important during trials.

“In 1997, I was part of the team that represented the country in the Meridian Cup in Portugal and it was from there the scouts of Barcelona Football Club spotted me. They invited me for a week trial after the tournament after which I was invited for another round of one week trial, and after four days of training with the team, I was given a contract by the club and signed to their youth team. After then, Xavi Hernandez introduced himself to me as being a member of the Spanish team that lost to Nigeria in the Meridian Cup.

“Barcelona loves players that are very comfortable with the ball even when they are under pressure, which is a key factor to play for Barca, aside from being skillful. The club would therefore not hesitate to dump a player as quickly as possible if he does not possess these attributes,” Okunowo noted.

Former Barcelona winger, Emmanuel Amuneke, attributed high “mental speed” of the players as the main reason behind the club being at top level till today, saying the club would still dominate for a long time.

“I am glad to have been part of the great club in my active days in football, but the present generation is far better than my era when the likes of Guardiola, Ronaldo de Lima, Patrick Kluivert and Rivaldo were the star players of the side.

“When you look at this present generation, their mental speed is very high and gives them the ability to read their surroundings and make accurate passes on the field. When a group of players play cohesively and have field vision far greater than other teams, there is no doubt that they will be a terror to other competitors,” Amuneke said.

Bassey rose to prominence during his time with Enyimba FC, where he was invited by coach Sunday Oliseh to the Super Eagle camp and featured in the World Cup first qualifiers against Swaziland where he produced a great display of football.

He will be the fourth NPFL player to join the North African side within the space of two weeks. Tosin Omoyele, Christian Obiazor, Junior Lokosa are also some of the Nigerian players who have followed suit.

The former Enyimba of Aba player will have to immediately get his scoring boots on to help the club improve their league standing with Al Masry currently 14th on the log with 19 points from 17 matches played so far.