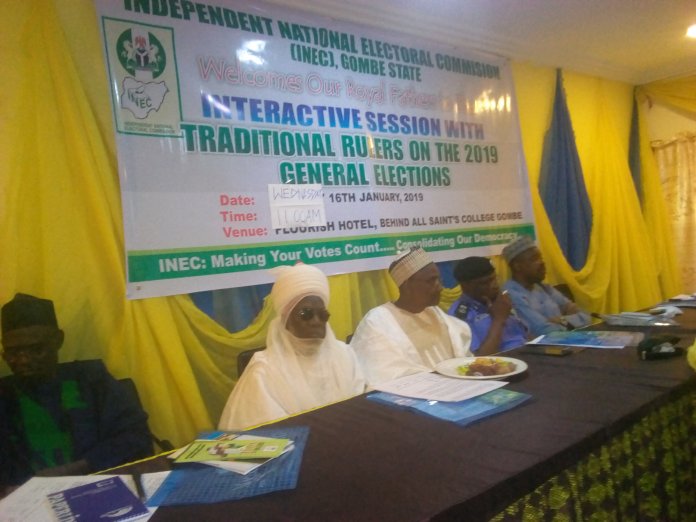 The Independent National Electoral Commission (INEC) has said that a total of 176,183 Permanent Voter Cards (PVCs) out of the 280,508 printed in Gombe State have remained uncollected.
The state Resident Electoral Commissioner (REC) of INEC, Alhaji Umar Ibrahim, said during an interactive session with traditional rulers as well as religious leaders in the state weekend.

The REC stated that in response to calls by stakeholders for the decentralisation of the PVC collection from the local government offices of INEC and ease the rigours of long distance, the commission recently approved the collection of the PVC’s at the registration areas or wards from 14th to 21st January 2019.

Umar therefore appealed to the traditional and religious leaders, who both met with the REC at different times, to call on their subjects and followers to visit their registration areas or wards for the collection of the PVCs before 21st January or go back to the INEC local government offices to collect them.

He emphasised that the PVCs remain the only valid instrument for participation in the forthcoming election, adding that the commission will temporarily suspend the collection of the PVCs on 8th January, 2019 for the general election.

The Emir of Akko, Alhaji Umar Mohammed Atiku, who responded on behalf of other traditional rulers, assured Umar that elections will be peaceful going by the peaceful campaigns already being experienced and promised to mobilise their subjects to collect the PVCs.

During their own session, the Gombe State Christian Association of Nigeria (CAN) Secretary and representatives of the Jama’atul Nasril Islam (JNI) said that they were already enlightening their followers on the importance of collecting their PVCs and the forthcoming election.