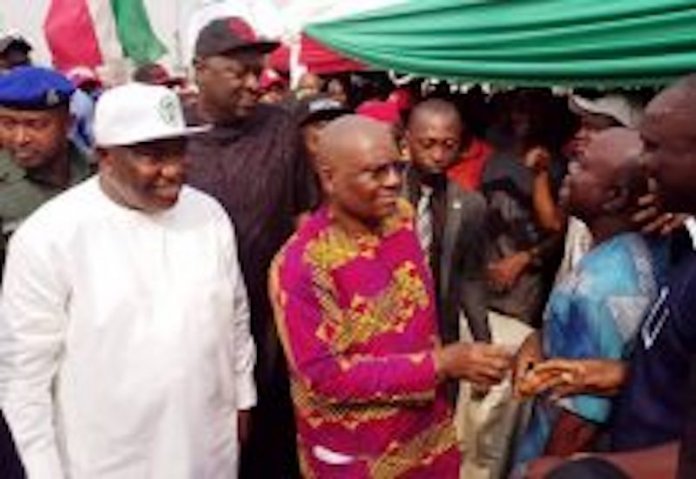 If any doubt remained about former Enugu State governor, Dr. Chimaroke Nnamani’s popularity, it would be whether he could still conceivably attract the sort of large crowd once seen at his events, having left office over a decade ago and literally fallen out of favour with the mainstream political establishment.

But had such doubt ever existed, it certainly must have been banished by the sea of heads at the expansive grounds of the Government House, Enugu, where a reception for the ex-governor and former senator was held last Wednesday as he, alongside other leaders of the Peoples Democratic Party from Enugu East Senatorial Zone, paid a courtesy call on Gov. Ugwuanyi.

For one who has endured a rather turbulent and less-than-edifying post-office experience, the enthusiastic crowd of supporters belied all that and, indeed, evoked memories of his eighth years as governor of the state that earned him a robustly loyal grassroots following identified as the “Ebeano Family”.

It was more like rolling back the years for Nnamani who, besides being the PDP’s Enugu East Senatorial candidate in next month’s election, was usually accustomed to having such large crowd in tow like the one that had converged for his reception at the Government House, which he was visiting only for the first time in 12 years.
“What we have seen today shows clearly that God’s time is the best, and that it is God who gives power to whomever he choses,” speaker of the Enugu State House of Assembly, Rt. Hon. Edward Ubosi, said.

The speaker’s reference to providence was particularly fitting as Nnamani had, in 2011 and 2015, controversially lost reelection bids to the Senate in spite of that famed popularity in a manner that could only have bred ill feelings, signalling a rather long spell on the fringes of Enugu State politics to the sheer consternation of many observers.

That, plus the fact he is on the cusp of returning to the Senate made the emotions he betrayed at the reception and thank-you visit quite understandable. “I’m very surprised with the level of reception I’m getting,” he said, thanking his host (the Enugu State governor, Ifeanyi Ugwuanyi) for giving him a “second chance” and describing him as a “benevolent man with an uncommon grace”.

“Who can explain? Who can decipher? Nobody can explain this. If it were to be written, nobody can write it. It is only God who can explain this. When I look around, I begin to wonder if I really deserve this honour. I am saying to the governor, let that benevolence which God has given me through you, let that benevolence be shown also to you in Jesus’ name,” he added.
He may have found the spectacular events of that evening totally humbling, yet as the speaker had noted in his remark, it wasn’t hard to situate the outpouring of support the former governor continues to enjoy. For Nnamani, it didn’t matter whether you were learned or was the child of a peasant, he explained, adding that “he gave opportunities to everyone regardless of their social status”.

The state’s PDP chairman, Hon. Nnamani (no relation of the former governor) corroborates this. “Barring his benevolence, most of us won’t achieve what we have achieved today,” he said, as shouts of “Ebeano” rent the air. The overwhelming gathering, according to him, vindicates the party’s insistence on fielding only candidates with grassroots appeal in the general election.
Beyond the large crowds that former governor Nnamani typically attracts, his popularity is further underscored by his defeat of the incumbent holder of the Enugu East Senatorial seat, Senator Gil Nnaji, at the PDP primary, late last year.

Governor Ugwuanyi also hinted at the remarkable impact of ex-Governor Nnamani’s barrier-breaking philosophy, when he noted that although the people of Enugu East Senatorial Zone said they had come to thank him for the honour he had bestowed on their “son” and in supporting him back to political reckoning, he considered himself rather more indebted. “If I should place things the way it should be, I don’t know who should thank the other. The only thing I’ll say is that all the praise belongs to God,” he said to a resounding applause.

Indeed, the gathering was a reunion of sorts for the Ebeano Political Family which, in its heyday, wielded so much influence that nearly every notable politician in the state owed their ascendancy to it. But, as politics goes, it did as well experience a severe dip in fortunes. It’s testament to the founder’s strength of character and the acolytes’ resilience that the group survived all those years in the doldrums, including its most trying period when its name almost seemed like an anathema.

Today, the Ebeano Family has regained its voice. However, the exuberant dance, songs, backslappings and parade of masquerades that gave the Government House, Enugu, a brief carnival air may be just a dress rehearsal ahead of the senatorial election in February, which ex-Governor Nnamani is widely expected to win.
But beneath the entire buzz lies this fact: The new found vigour currently sweeping through the Ebeano camp is proof yet that Gov. Ugwuanyi’s often expressed commitment to an inclusive politics is not mere lip service.
––– Ani resides and works in Enugu.