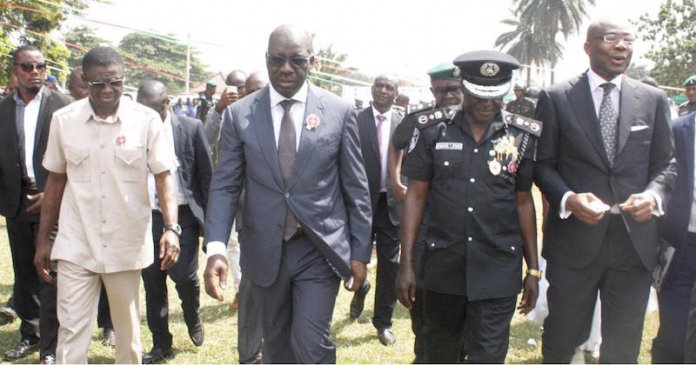 Edo State Government recently unveiled a new security architecture to tackle insecurity. Adibe Emenyonu who was at the ceremony in Benin City, reports that the government also inaugurated the security trust fund and committed N2 billion as seed fund

In the words of the governor, components of the state security architecture include: 50 special security cars fitted with modern communication and security gadgets, 30 Toyota Hilux patrol vans, 30 patrol motor bikes and three Tropicalised Armoured Personnel Carriers APC, three ambulances, Integrated Command and Control Centre and five special security check points, to be manned at all the entry and exit points in the state.

Speaking at the launch of the initiative, the Obaseki explained that security is central to his administration’s reform agenda. While thanking Chairman of the state Security Trust Fund, Mr. Aigboje Aig-Imoukhuede for kick-starting the donation with N200 million, he called on all citizens of the state, as well as good spirited individuals to contribute to the trust fund.

While stressing that the new security architecture is a comprehensive programme, he said: “I thank the Edo State Security Trust Fund, Mr. Aigboje Aig-Imoukhuede for kick-starting and donating N200 million to the fund. I call on all Edo State citizens to contribute to the Security Trust Fund”.

It was also gathered that the new security programme will include young men and women drafted from each of the 192 wards in the state to be recruited and trained by the Nigeria Police to help in intelligence gathering and monitoring of government assets across the state with the believe that involving the community, enough information would be gathered on what is going on in the state.

According to the governor, “apart from the police, military, Department of State Security and other security agencies, we are recruiting 100 young men and women from each ward across Edo State. The first 1,000 of them have been recruited and trained by the Nigeria Police, as they will help in intelligence gathering, and monitoring of government assets across the state.

“We believe by involving the community, we would be able to obtain enough information as to what is going on in the state. The effectiveness of our new strategy is based on community participation”.

Seal of Approval by Police

He said, “We are very happy to witness this wonderful gesture. I want to call on all other private and public enterprises to support this initiative so that what succeeded in Lagos will also succeed in Edo State. Gone are the days that people left policing for the police alone. I also want to thank the chairman of the trust fund for deeming it fit to come and assist the state.

“With the launch of this security architecture, Edo people and residents will now sleep with their eyes closed. I am also aware that gunboats have been procured in addition to the vehicles and other equipment we are launching today.

“This means we will be able to cover activities on land and sea which will be augmented with aerial surveillance using the Police helicopter. With all these efforts, Edo will become very safe for everyone. The security architecture will ginger security agencies to collaborate more, and where there is collaboration there will be coordination among us.”

The then Edo State Commissioner of Police, Johnson Kokumo commended the governor for the support he has extended to the police command, which he said has made the state safer for residents.

He assured that he would join efforts with other Edo sons and daughters at home and in the diaspora to replicate the success story of the Lagos State Security Trust Fund, in Edo State.

“I and the companies I represent donate the sum of N200 million to the fund. I call on citizens of Edo State to join hands with the Edo State government and all the security agencies to make the state safe and peaceful for all.

“This process is not for the government alone but also for the private sector, companies and individuals to join hands with the state government in pushing the agenda for a peaceful Edo State.”

Highpoint of the ceremony was the the unveiling of the Security Architecture, codenamed by the representative of the Inspector General of Police, DIG Emmanuel Inyang; and announcement of the security codename: “WABAIZIGAN”, meaning, ‘Stop Criminality’, by the Secretary to State Government (SSG), Mr. Osarodion Ogie.

It is hoped that with the unveiling of this new security architecture and launch of security trust fund, residents of the state will begin to sleep with their eyes closed.