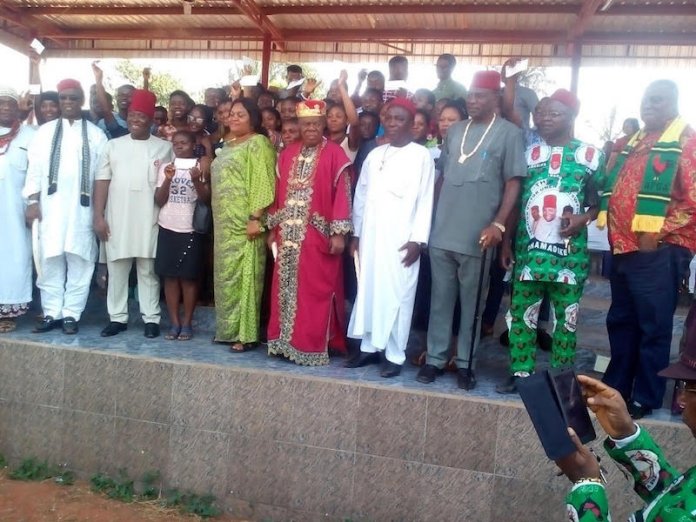 David-Chyddy Eleke writes that just 10 months in the senate, Senator Victor Umeh has lived up to expectations given his drive to empower the youths in his constituency in Anambra Central Senatorial Zone

During his campaign in 2015, Senator Victor Umeh had promised among other things to use his position as a member of the National Assembly to empower youths of his constituency. In several places where he took his campaigns to, Umeh stated that as a legislator, he may not exactly have the resources to embark on project execution, but with quality representation, he would be able to attract from the federal government, its agencies and parastatals empowerment kits, which would engage the youths and keep them away from vices.

His hopes were dashed when after the elections, Mrs. Uche Ekwunife was announced as the winner of the Anambra Central Senatorial Zone election. But in January 2018, Umeh got his chance when he won the rerun election overwhelmingly and was sworn in.
Within 10 months of settling down at the National Assembly, Umeh has provided serial empowerment for youths of the zone, ranging from trainings, scholarships and disbursement of tricycles and others. Recently, the senator who is popularly called Ohamadike, unleashed his empowerment programmes on youths of his zone, which he insists are not campaign strategys, rather, his late arrival at the national assembly cost him the opportunity of receiving the empowerment materials at the same time with other lawmakers.

During the empowerment and distribution of starter kits to 151 trainees at Neni, Anaocha Local Government Area headquarters in the state , which he attracted from the National Directorate of Employment (NDE), Umeh said his colleagues at the senate were amazed at the speed with which he blended with them.

“Some people have even forgotten that I am just 10 months old in the senate, but because of my experience and knowledge of legislative duties, I did not find it hard picking up. Some people may have argued that my representation was mostly for Ndigbo and not Anambra Central, my immediate constituency, but again that is not true.

“For example when I got to the senate, I found that there was opening for creation of a federal institution of learning in one senatorial zone each, and in my zone, we already had Nnamdi Azikiwe University, and in Anambra South too, there is Federal Polytechnic, Oko. I found out there was none in Anambra North. You see, when you go representing a people, anywhere you see they are not represented, you bring it to national consciousness.

“That was why I met Senator Stella Oduah because she represents that zone, and we cosponsored that bill, but I had to drive it from the first reading, through second reading and public hearing and all. Same thing happened when I found out that Igbos were not represented in the nation’s security council, and that the South- east was not accommodated in the rail line. That is what we call representation.”

On the empowerment scheme he said 151 persons were trained by him and empowered with N4million, adding that, “Beyond these, the Central Bank of Nigeria (CBN) will empower them with N1million to N10million loan, which they can accessed as far as you are one of these ones that have been trained by NDE. The CBN will provide them with the equipment for the business. Assuming they were trained in block making, the CBN will provide the block making machine ,which can cost between N1million to N10million, and they keep back the receipt, and once you complete payment, you can now pick up the receipt and it becomes yours. This is what we have attracted for our people.”

Umeh also at a different events awarded scholarships to 70 indigent undergraduates in his constituency- 10 each from the seven local government areas that make up the senatorial zone.

He said, “I made the promise within a week of my swearing in, during a radio programme. I did not make the promise so they will vote for me, but after I had won and was sworn in. We choose 10 persons from each of the local government areas that make up my senatorial zone and our target is to give scholarships to people who cannot afford it and not to people whose parents can afford to give their children the education they need.

“I promised to offer honest, representation, and that is what we are doing today. We will train these people from their first year to their graduation. Beyond that we have been doing this since 11 years now. I don’t believe in propaganda and we want to give honest, bold, courageous and firm representation to our people. I have 40 project inserted in the budget of 2019, and by the time the projects would be executed, the impact would be felt everywhere.”

One of the many empowerment schemes carried out by Umeh was by empowering his people with transport business. During the disbursement of 34 tricycles attracted by him to youths of the area, Umeh said he had to move immediately he learnt of the empowerment which has already been received by other lawmakers, but was surprised that officials wanted to bribe him with money to forfeit the empowerment materials, insisting that it was usually the custom among lawmakers.

“I simply told him that; I am Victor Umeh, and that I was here to offer quality, courageous and transparent representation to my people, and that I would take the 35 tricycles. He tried to discourage me by saying that I still needed to move them to Anambra and other inconveniences involved, but I insisted on taking them. These are the tricycles we are distributing here today,” Umeh said.

Speaking on the kind of representation Umeh was giving to the people of the zone, the Transition Committee Chairman, Anaocha Local Government Area, Ikeobi Ejiofor said, “Umeh has simply surprised the people of this zone, but we are not surprised because we know his antecedents. Besides these 70 people you see here that he has given scholarship, he also has 249 persons he is training in various institutions of learning. His works are speaking for him, and am sure what he has given in just 10months, Anambra Central people will like to taste it for full four years.”

Also speaking, the traditional ruler of Agulu community, Igwe Innocent Obodoakor said, “We have been having senators in this zone, but this one is different. Umeh has simply shown that he is different and has the good of the people at heart. His representation is simply different, and I know that Anambra Central people are taking note of all these.”