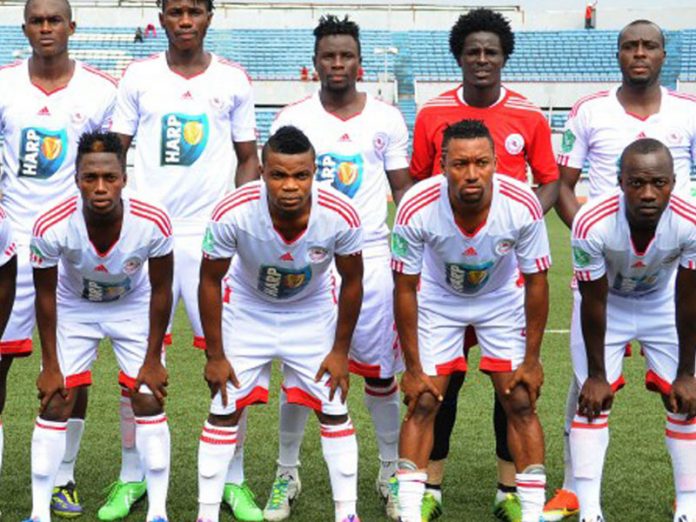 Nigeria’s representatives in the CAF Confederation Cup, Enugu Rangers, made a bold statement of qualifying for the money-spinning group stage yesterday when the Flying Antelopes defeated hosts Bantu FC of Lesotho 2-1 away in Maseru.

Rangers will consolidate the victory if they are able to secure another win  at their fortress at the Nnamdi Azikiwe Stadium in Enugu on January 20 with the overall winners advancing to the mini-league stage of the competition.

Top scorers for the Flying Antelopes, Bright Silas and Aguda Godwin were the scorers for the coach Olugbenga Ogunbote side who let in a late goal off the boot of 26-year old South African import, Lazola Jokojokwane.

Silas shot Rangers in front on 20 minutes after connecting beautifully with a Chidera Eze’ inch perfect cross while Aguda increased the lead on 87th  minutes with another Chidera’ assist to send the travelling delegation into wild jubilation inside the 20,000 capacity Setsoto Stadium in Maseru.

However, a little loss of concentration from the backline of the seven-time Nigerian league champions allowed the host to half the deficit as Jokojokwane scored from a tight angle on the 89th minutes.

Rangers Head Coach, Olugbenga Ogunbote, said after the encounter: “It was a great performance from my players but for the last minute loss of concentration. It will always get better”.

He however admitted that the Maseru team was not a bad team despite conceding defeat at home.

“I believe that Bantu is not a bad side but by the special grace of God we shall finish the job we have started here when we meet again in the return leg at home,” the coach noted.

Captain of the day, Godwin Aguda said after the crunch encounter, “I give God all the glory for this victory. I believe that God’s favour is upon us and we shall continue the good work in Enugu on Sunday.”

Rangers will take on the Lesotho league champions in the return leg slated for Nnamdi Azikiwe Stadium in Enugu on Sunday, January 20, 2019 with the aggregate winner qualifying for the group stage of Total Confederation Cup 2018/2019.