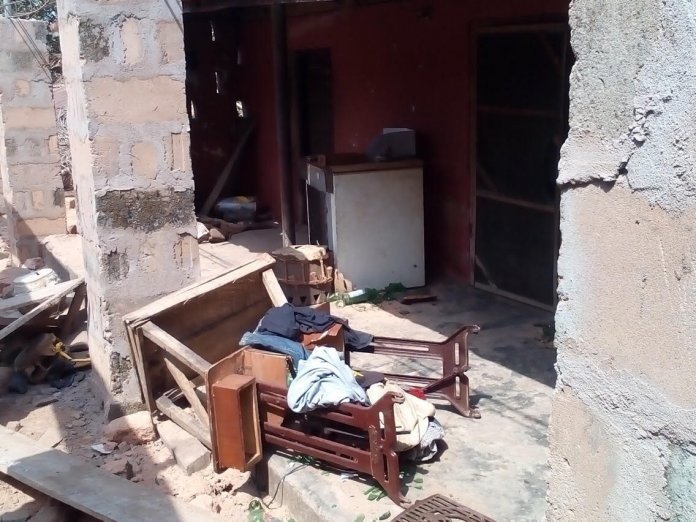 Igbariam community in Anambra East Local Government Area is an agrarian community, which is regarded as food basket of the state. However, an ongoing land feud has turned it into ghost community as youths and adults have gone into hiding for fear of their lives,  David-Chyddy Eleke reports

It wasn’t this reporter’s first time in Igbariam, but this particular visit was greeted with strange sight of an empty community, which had mainly aged people and children only, around. As one drove by, aged women, who were mostly the only people in sight in the community scampered back into their farmlands on sighting visitors. Even children who were playing along the road showed a lot of discomfort by just sighting a face that was unfamiliar.

The reason was that the community had recently been ravaged by some hoodlums, who were bent on silencing those speaking in opposition on a communal land issue that had become a source of trouble in the community.

Over seven houses belonging to opposition voices have already been destroyed, while some known voices, numbering as much as 16, including an 84-year-old retired headmaster, who spoke in opposition to the attempt to forcefully take the disputed land, have been arrested and detained in Abuja.

THISDAY learnt that the siege is even more in Ubaru community, where the indigenes are the most targeted for attacks by hoodlums, and arrested by security agencies, because of their vehement refusal over the alleged forceful takeover of their land by their leaders, to whom the thugs were answerable to, leading to their being ceaselessly tormented.

According to an indigene of the community, Mr Nnalue Iloegbune, who is also a victim of the attack, trouble started when some leaders of the community tried to take over a part of a large chunk of land owned by the community for themselves.

“After the civil war, 360,085 hectares of land, which was part of the farm settlement was given back to Igbariam community. The community decided to share it into eight portions, each for the seven villages in the community and one portion was left for development project for the community.

“We have been making use of the land, but since 2014, our president general(name withheld) said we should keep part of the land for him, when we objected, and called for a survey of the land for so that we can divide it in parcels, our traditional ruler, Igwe Kelly Nneli threatened to banish Ubaru village which was in the forefront of the demand.”

He alleged that since their refusal to let their leaders take the parcel of land, they have connived with the monarch of the community to unleash hell on them, including using hoodlums to terrorise and destroy their properties.

He said, “What is even more worrisome now is that the people who are destroying our properties are free, while those whose properties were being destroyed are arrested and taken to Abuja by security forces on the grounds that we were making trouble in the community.

“They have arrested several people, including an 84-year-old retired headmaster who refused to succumb to their wishes, and every body in the village is on the run. That is why I am hiding here.”

True to Nnalue’s words, THISDAY correspondent who visited the area found it totally deserted. Save for old women and children, the town during our visit was a ghost of its usual bubbly self. An 80-year old woman, Mrs Agnes Atomba who was found sitting in her compound told our correspondent that, “in one week, this my house has been invaded three times.

“The last one was on Friday around 2am, while I was sleeping. Over 50 young boys invaded my compound, and I was almost naked. They threw me out of the house and started destroying everything. They said they were looking for my son, Lambert, but I told them that Lambert was in Lagos, and in the process they took away N200,000 sent to me by my children for medication and upkeep.”

Another woman, Mrs Catherine Ogini said that she was also visited by the hoodlum, and that in addition to destroying her house, they took away about N300,000 she was keeping in her house for the local church.

She said, “They also took away gallons of palm oil, which I was yet to sell, and our television. We are calling on government to help us to stop this, because we cannot continue to live in fear like this.”

An indigene of the village who also spoke to our correspondent during the visit but begged not to be named said, “This thing our Igwe(monarch) and the president general are doing to us, is it good? Just as I am talking to you now, if any of their agents sees me and tells them, this night their boys will come here and strangle me to death. For how long will we continue to live like this?

“If you know the history of Anambra State, every inter-communal war or intra-communal war has always been linked to land tussle, and we pray that this one will not degenerate to such extent.

“Those of our brothers just over there; Aguleri and Umuleri is still fresh in our minds, and only God and government can save us from the same situation, because people are being pushed to the wall.”

Meanwhile, Iloegbune who spoke to THISDAY from his hideout said, “We are calling on the federal government and the governor of Anambra State to come to our aid. We are sending a save our soul call to them, because Anambra has largely been peaceful under Governor Willie Obiano. This is even his local government, and we believe that he can call those terrorrising us to order.”

Zero Reaction from the Monarchy

When THISDAY visited the palace of the traditional ruler of Igbariam, Kelly Nneli, two young men who introduced themselves as his security refused to admit  visitors, saying that the monarch has not given them authority to let visitors in.

Though they admitted that the monarch was in, they stated that anyone wishing to see him should reach him on phone and if cleared would be allowed in. They however refused to disclose his phone number too.

Reacting to the mass arrest in the community, the spokesperson of the state police command, SP Haruna Mohammed when called on phone feigned ignorance of the crisis.

He stated that he was unaware of the mass arrest of adults in the community, but promised to get back to our correspondent. When asked if policemen can come from Abuja to arrest and take away suspects without recourse to the state command, Mohammed said he would only be able to comment after enquiries and briefing from the appropriate quarters, which wasn’t done weeks before the story was published.