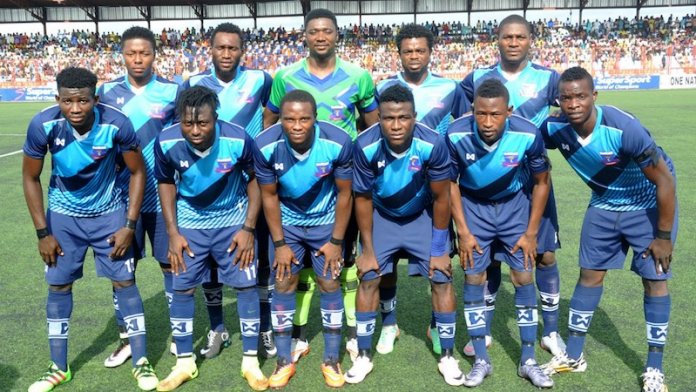 After 18 years of absence, Lobi Stars of Makurdi return to elite continental club tournament when they host Mamelodi Sundowns of South Africa in the 2018/19 CAF Champions League Group A clash tonight.

Interestingly, in their last outing in year 2000, it was a home match which they lost 0-2 to more experienced Ashanti Kotoko of Ghana at the Aper Aku Stadium.

But starting from 5pm Nigerian time this evening at their adopted home in Nnamdi Azikwe Stadium, Enugu, the ‘Pride of Benue’ will take a bit of advantage of their under strength opponent who are in Nigeria without their main striker Jeremy Brockie.

The South African club side will need to look elsewhere for firepower as they will be without their star forward, Brockie, because he was suspended.

Lobi Stars, a major beneficiary of the abridged domestic topflight league return tonight to the competition banking on recent pre-season form. They are not bothered by the late kick off of the NPFL season as they reached the group stage after defeating Kenyan giants Gor Mahia in the first round tie late last year.

The match ended aggregate 3-3 draw but the away rule gave the Nigerian team the edge to proceed to the group stage.

They will look to Sikiru Alimi, who hit the back of the net twice against Gor Mahia, when they take on a much-fancied Sundowns side.

The South African ABSA Premiership giants thumped Al Ahli 4-0 on aggregate with the first-leg encounter having ended in a 0-0 draw.

Although odds favour the visiting side to get the result in Enugu, team’s top striker, Chile Azu, who joined the squad from Go Round FC insisted that home advantage will give them the edge to win the clash get the maximum points on match day one.

“We have resumed and have started training for the start of the CAF Champions League. We are taking every training session seriously and are hoping for the best ahead of the first game with Mamelodi Sundowns.

“We know the assignment at hand and are more than ready to make our fans happy right from the first game until the entire six games we are going to play in the group stage. We are going to be focused on our preparations while we are going to wait to get more information about them. We are not afraid,” he commented at the end of the team’s final training session yesterday.

Oromoni: Our Children are Traumatised, Dowen Parents Cry Out