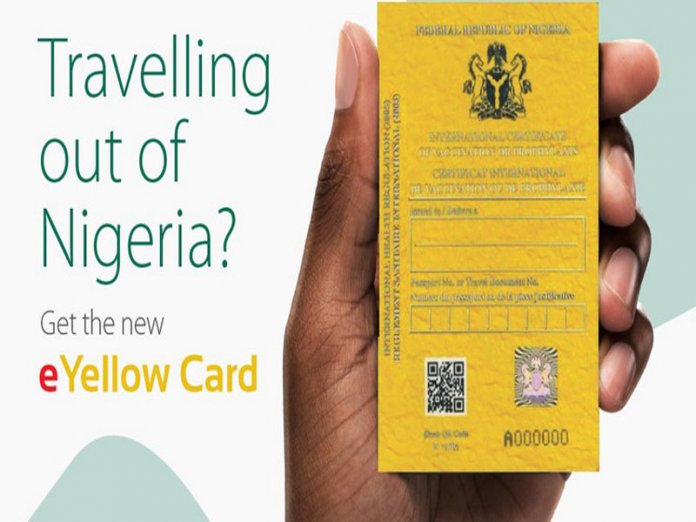 The federal government has said that it introduced E-Yellow card in order to stop touts from hawking and selling fake cards to passengers at international airports in the country.

The International Certificate of Vaccination or Prophylaxis (ICVP), international health certificate, popularly called Yellow Card, is to be used to capture vaccinations against yellow fever and other diseases, which some countries do not want anyone with such ailment to enter their country.

This has been abused over the years with touts and some airport workers hawking and selling fake ones to unsuspecting travellers.

But now, the federal government has introduced Yellow Card that is transmitted electronically and it comes with advanced security features, thus putting to an end the era of fake issuance of yellow cards.

The Airport Manager, Murtala Mohammed International Airport, Lagos, Mrs. Victoria Shinaba, explained that the card, which is machine-readable, is said to have the ability to store vaccination history of the holder.

The Federal Ministry of Health said the card was designed to put an end to the era of fake yellow card issued by unauthorised personnel and that the existing yellow card officially expired on August 1, 2018.

The Federal Airports Authority of Nigeria (FAAN) working in tandem with the Ministry of Health said it is also prepared to ensure that any yellow card presented by travellers at the nation’s airports are genuine.
Shinaba said the e- yellow card is a welcome development and that the agency was particularly happy about it because its introduction would stop touting of the cards at the MMIA.

“At least all this touting of our yellow card will completely be eradicated, people will not get outside the country and they say they are carrying fake yellow card and those doing back hand businesses with it will also be eradicated”, she said.

Shinaba said FAAN was working closely with the Port Health Services in the area of sensitisation of the travellers to keep away from touts who peddle and hawk the document.

“We have given them the go ahead to deploy banners so that people are aware, passengers are aware, the explanation of how to get the e-yellow card is simple and the design too is good, you can code it to know whether is genuine or not, it is a positive one, we are working closely with Port Health on this”, Shinaba said.