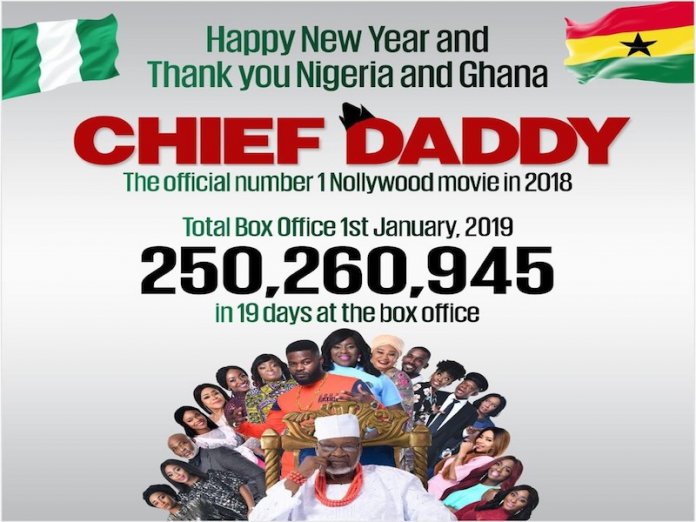 EbonyLife Films’ Chief Daddy closed its 2018 record-breaking run with an astounding N235, 469,368 – the highest box-office total for a Nigerian film in 2018 and the third-highest-grossing Nollywood movie of all time.

This amazing feat makes EbonyLife Films a producer of all three movies at the top of the all-time box office chart.
The emergence of Chief Daddy capped the end of a remarkable year for Nollywood, despite a slow start, in which three films went beyond the N200 million barrier, a feat only achieved by the Wedding Party movies in 2016 and 2017.

Ayodeji ‘AY’ Makun had his biggest hit to date with the dramatic comedy, Merry Men, that posted N235.2 million by the end of its run. Kemi Adetiba’s King of Boys was the second big Nollywood movie of 2018, scoring over N220 million.

Also, it was a landmark year for Niyi Akinmolayan, who directed two films, The Wedding Party 2 and Chief Daddy, that gained number one status in the same year.

One interesting aspect of Chief Daddy’s performance over the holidays was that, despite Aquaman posting higher revenues due to higher ticket prices for its 3D and IMAX screenings, many more viewers went to see Chief Daddy, making it the most-watched movie for the season.

The Niyi Akinmolayan film opened in cinemas on Friday, December 14 and has maintained the number one position for local movies since then, despite competing with a strong lineup of holiday releases.

Moses Babatope, COO of FilmOne Distribution is pleased with the film’s performance.

“Our overall goal for Chief Daddy was N200 million, given the glut of releases on the December schedule, but it reached the target in just 16 days. It has exceeded our expectations, making it one of a handful of films that have made 2018 an outstanding year for Nollywood.”

Mo Abudu, Executive Producer, is excited about her film’s trajectory. “We knew Chief Daddy would do well but it has outperformed our projections.

“It’s a little reminiscent of the early days of The Wedding Party, when all the shows were selling out but we had no idea how far the film would go. I have to give credit to our amazing cast, who gave so much time and energy to meeting fans at cinemas all over Nigeria and in Accra – we couldn’t have done this without them.”

Chief Daddy is still showing in cinemas across Nigeria and at Silverbird cinemas in Accra, Ghana.