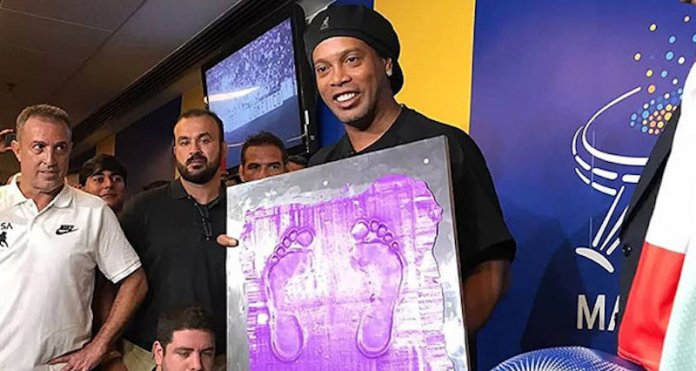 Brazil’s former football star Ronaldinho yesterday left his footprints in the Hall of Fame in Rio’s legendary Maracana Stadium, one year after retiring from the sport.

“This is one of the biggest trophies of my career,” the 38-year-old – full name Ronaldinho de Assis Moreira – told reporters as he was hailed by dozens of tourists visiting the stadium built to host the 1950 World Cup final match.

His footprints will now be displayed alongside those of other Brazilian greats such as Pele and Zico.

Ronaldinho first received an invitation to leave his prints in 2011, but put it off because of his busy agenda, he said.

The former Barcelona forward won the 2002 World Cup with Brazil alongside Ronaldo and Rivaldo, scoring a memorable long-range free-kick against England.

He was awarded the Ballon d’Or as Europe’s best player in 2005 and finally hung up his boots in January 2018, seven years after returning to Brazil.

Since then, he said he has had “a very active life”, though he still misses his sporting days.

Discovered in the southern Brazilian city of Porto Alegre, where he was born, Ronaldinho also spent time with Paris Saint-Germain, AC Milan, and at Brazilian teams Flamengo, Atletico Mineiro and Fluminense, as well as a year with Mexico’s Queretaro.

He did not respond to reporters’ questions about the confiscation of his passport late last year over an unpaid $2.3 million fine for damaging the environment while having a property built on a lake in a conservation area.

Nor did he reply to questions about how he viewed the first days of Brazil’s new President Jair Bolsonaro, whom he supported during his campaigning via his Instagram feed.