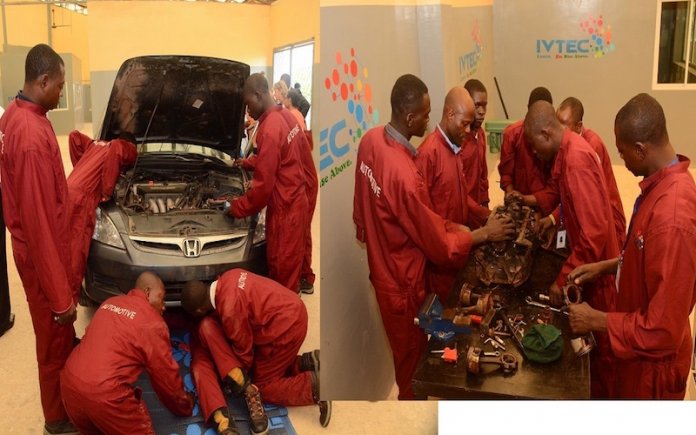 The college located in Ajase-Ipo in Irepodun Local Government Area, was established to train unemployed youths in the state in vocational skills in various programmes to make them self-reliant and job providers rather than job seekers in the state.

Some of courses taken by the students include are automotive mechatronics, masonry, furniture and cabinet making, CCTV, web application system, security and networking, computer hardware, electrical installation and maintenance and catering and culinary services, among others.

The students were drawn from the 16 local government councils of the state and were admitted into the college through the support of the state government by subsidising their tuition fees.

Speaking at the maiden graduation ceremony in Ajase-Ipo, Governor Abdulfatah Ahmed said “our government recognised the dearth of critical vocational skills and established IVTEC to provide business-relevant training as a reliable pathway out of unemployment and a means of economic empowerment.

“We also offer IVTEC as a way of getting more youths employed and minimising the risk of their involvement in criminal activities, insurgency and other social vices. It was also established as a means of stimulating the economy through informal sector development. We offer IVTEC and its accomplishments as models that other governments can emulate.”

The governor added: “Today, tertiary and other training institutions produce graduates at an exponentially higher rate than the public and private sectors can employ. When you add those youths who do not make it past either primary or secondary schools, a vast army of the unemployed confronts us.

“Being a proactive administration, we recognised the dearth of critical vocational skills and established IVTEC to provided business-relevant training as a reliable pathway out of unemployment and a means of economic empowerment.

“We have also leveraged partnerships with globally renowned institutions to benchmark IVTEC against global standards in vocational and technical skills training as well as lay the foundation for making Kwara State the hub of vocational skills.

“These institutions include as the World Bank, City and Guilds of London, Alfred University, New York, and the University of Wolverhampton, National Directorate of Employment, as well as private sector companies.”

While calling on the graduands to think outside the box, the governor said it would help them to attain their desired goals in life.

He urged them to identify the gap that exist within the society and close it, adding that such step would provide them the opportunities to contribute more towards the economic fortunes of the state.

The Rector of the college, Dr. Ade Somide lauded the state government’s efforts at reducing youth unemployment in the state, adding that the efforts have yielded positive results with the graduation of the first set of students of the college.

He promised that the management would continue to work harder to ensure more accreditation of programmes for the institution so as to enable the college award national diplomas.