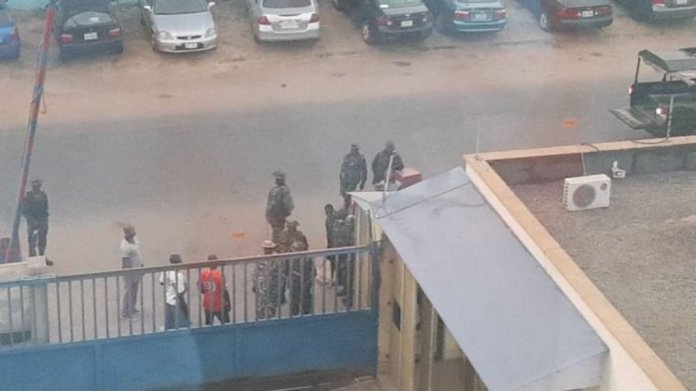 The regional office of the Daily Trust in Maiduguri, Borno State was on Sunday invaded by soldiers.

The Daily Editor of the paper, Nasiru Abubakar, who confirmed the development on a Nigerian Army social media platform Sunday, also said that the Regional Editor Uthman Abubakar and a reporter Ibrahim Sawab were arrested.

He said the invasion and arrests were not unconnected with its Sunday lead story on the offensive by the military against Boko Haram.

“It is not clear why they took the action but it may be connected with the lead story of Daily Trust on Sunday on military operation in the North East”, he said.

“I don’t know anything about that,” he said.

The Army Spokesman, Brigadier-General Sani Usman, in return to a call made to him, requested a text message which he did not reply as at the time of filing this report.

Another staff of Daily Trust who spoke anonymously said the soldiers shut the gate of the Maiduguri regional office, after arresting the two editorial staff on sight at the time of the raid.

He said they also requested for Hamza Idris, the third  journalist whose byline appeared in story, who is an Abuja-based political editor of the newspaper.

Calls to the two arrested journalists were not going through as their phones were switched off.