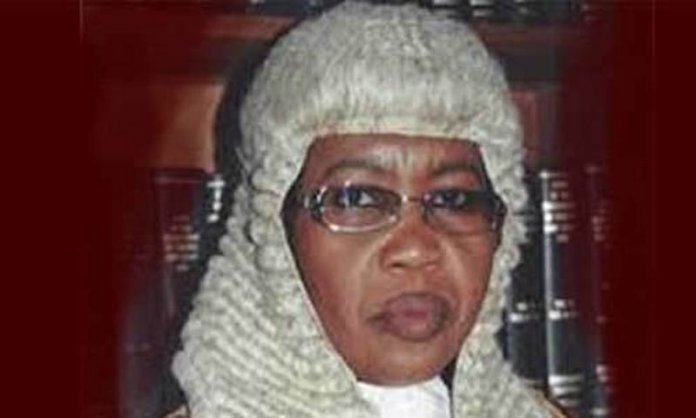 A similar event occurred on Tuesday, March 23, 1993 when Judith S. Kaye was sworn in, as Chief Judge of New York State. Governor Cuomo declared it was the beginning of ‘a new era.’ One of the most notable aspects of this new era is the fact that Chief Judge Kaye is New York’s first woman Chief Judge. Aloma Mariam Mukhtar later became Nigeria’s first female Chief Justice of Nigeria and indeed her presence at the apex court marked the beginning of a new era for Nigeria’s female judges who previously could only dream of making it to the Supreme Court.

After 14 years at the Court of Appeal, the Senate recently confirmed the appointment of Hon. Justice Uwani Musa Abba Aji as a justice of the Supreme Court of Nigeria. The Yobe state born jurist will be the seventh woman appointed to the apex court and second from the North East after the retired Clara Bata Ogunbiyi (Borno State).

It has indeed been a long journey fraught with battles and controversies but as the good book says, to everything under the sun, there is a time and season.
She was elevated to the appeal court on September 22, 2004 along with Justices Mary Peter Odili and Kudirat Keke –Ekun. Although women have not yet reached parity with men in terms of their numbers within the federal judiciary, significant progress has been made and the list keeps growing.
Abba Aji’s confirmation came after the senate considered the report of the committee on Judiciary, Human Rights and legal matters on her nomination. Chairman of the committee, David Umaru, said the nominee has been screened and satisfied all requirements.

But her confirmation was not without pitfalls. Immediately her nomination was announced a certain Civic Society Network Against Corruption (CSNAC), through its Chairman, Mr. Lanre Suraji, urged President Muhammadu Buhari not to forward her name to the Senate for confirmation as a Justice of the Supreme Court of Nigeria, on the basis that she was under corruption investigation by security agencies for allegedly accepting a bribe from a senior lawyer who is currently facing trial in court, some questions arose.

Suraju, who is a member of the NJC’s Corruption and Financial Crime Cases Monitoring Committee set up last year by the CJN, was said to have threatened to challenge Abba-Aji’s appointment in court should President Buhari assent to her elevation to the Supreme Court.

Nonetheless, the National Judicial Council (NJC) has since reacted to the call asserting that there are no allegations of corruption against her. The NJC in a statement by its Director of Information, Mr. Soji Oye, explained that contrary to CSNAC’s claim, Justice Abba-Aji has no pending corruption case to disqualify her from being appointed to the apex court’s bench. The Council had at its 87th meeting chaired by the CJN on October 3 and 4, recommended Justice Abba-Aji, currently the Presiding Justice, Kaduna division of the Court of Appeal, to the President for appointment as a Justice of the Supreme Court.

Her lordship was one of the eight judicial officers, who were directed by the NJC to excuse themselves from duties, effective from November 2, 2016 on the request of the Attorney General of the Federation (AGF) pending the outcome of their investigation by the DSS, on corruption allegation. She and others were however directed to resume duties on June 7, 2017 on the grounds that no charges were brought against them by the AGF at the conclusion of their investigation.

Strangely, as soon as she was announced for elevation, CSNAC showed up. Yet, the story of United States’ Justice Brett Kavanaugh is still very fresh. After investigations on allegations of sexual misconduct levelled at him, a letter to the Senate Republicans from the Senate Judiciary Committee Chairman revealed that none of the witnesses provided evidence to back their claims. Subsequently, he was cleared and elevated to the Supreme Court of the United States. Some months ago, one of his accusers not only admitted that she lied to the congress but revealed that she had never met Kavanaugh.
On the Nigerian scene, if the AGF and his team that initially alleged graft failed to bring charges against Abba-Aji at the end of their investigations, why the insistence by CSNAC that she is under corruption investigation by security agencies?

When the NJC in view of no pending corruption case against her and other justices called them back to work, CSNAC raised no posers. All that while, she adjudicated over matters and wrote judgments. If she is considered unfit to sit on the apex court bench on account of alleged corrupt practices, does it then mean that justices with corruption tendencies are suitable for the Court of Appeal? Would it not amount to grave injustice for CSNAC to be silent over the recall to the Court of Appeal, of a judge that is likely to pervert the course of justice? Would it not be a great travesty of justice to suffer litigants the agony of going on appeal when it is known that they will not get justice? CSNAC needs to answer these questions and more if in their opinion she is unfit for elevation but kept mum when she was recalled to the Court of Appeal.

But for routine appeals to the Supreme Court by lawyers and litigants who are dissatisfied with some decisions of the appeal court including that of her lordship, there has never been any known petition against her.
In a recent address to women judges, Hon. Justice Amina Augie of the Supreme Court of Nigeria had this to say: “In writing our judgments, we must seek to interpret the law justly, fairly and expeditiously, to ensure that justice is not delayed. We must strive to ensure that we are not only applying the law as it is, but adopting philosophical and normative approaches to interpreting the law.
“The end result should be a ruling or judgment that delivers justice while simultaneously building on existing jurisprudence… We are judges first, then women; so we must always present ourselves as qualified and competent candidates; not as alternative choice or affirmative choice.

“As judges who are women, our roles are no different from our fellow male judges; our role as judges is to play a part in the creation of jurisprudence. That is, women that recognise the importance of human rights, regardless of the field of law in question, particularly so for judges in common law jurisdictions.
“We must ensure that in interpreting and applying the law, we are playing a representative role as agents of change; that the law does not only have a human face but also has a woman face.”
So far, the above charge has not been controverted as it concerns Hon. Justice Uwani Abba-Aji.

The law is clear about the party on whom the burden of proof lies. The onus, the obligation has always been on the party who makes an allegation to prove the claims made against the other party. As at today, our laws provide that a party is presumed innocent while the other side bears the burden of proof. The law is trite that he who asserts a fact must prove it, and where enough and relevant evidence are not adduced, then it is he who has failed to produce the evidence that will fail in his case.
–––Legal Practitioner, Editor -in – Chief/Publisher – Law & Society Magazine