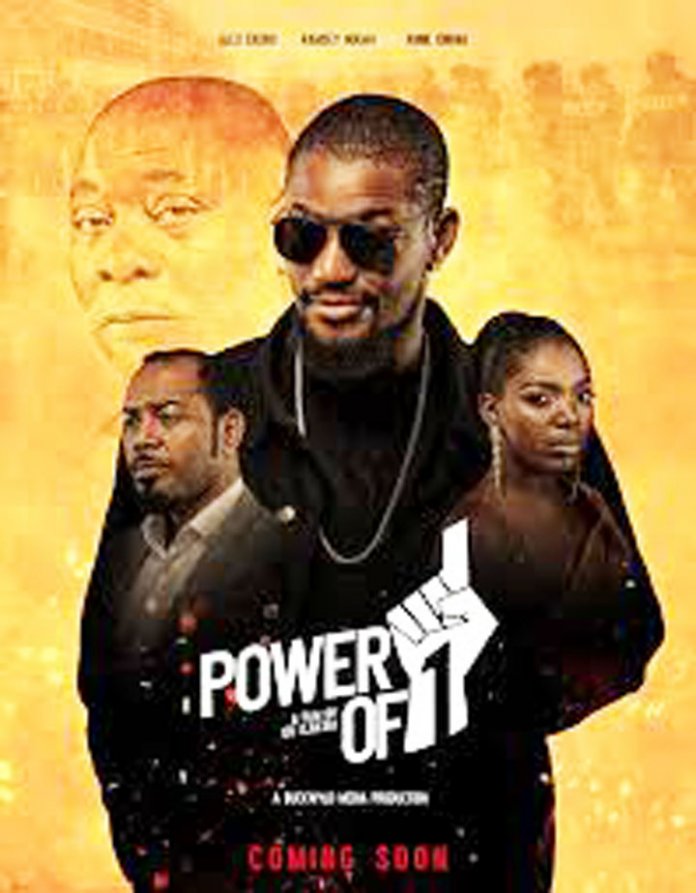 Already opened at the cinemas just about a week ago, ‘Power of 1’, the much anticipated cinematic work directed by award-winning Izu Ojukwu bears the sub-theme of a music concert held annually, which is in its seventh run. Prior to the “Buckwyld and Breathless: #Power of 1” concert by music superstar, Tuface Idibia it was revealed, among other things, that the singer’s wife, Annie Idibia, would feature in the movie, with its teaser released at the concert held on the 20th of October.

“Power of 1” follows the story of Jutin Aba, (played by Alexx Ekubo) a successful musician and a socially conscious Nigerian. He has a large fan base and didn’t know how powerful he was until he supported a cause by identifying with the cause.

Without an ulterior motive, he had put up a random message being circulated on social media and which was shown him by his wife and this singular post changed his life and the lives of the people that he loves most. As a socially conscious individual, he decided to go along with the people to stage a protest against the government’s policies and this brought about the intrigues, secrets and politicians jostling to get him to their sides.

Efe Omoregbe, the CEO of Buckwyld Media, producers of the movie, had informed that the movie was to reawaken Nigerians. “It is, therefore, aimed at correcting the notion that the action of one person does not hold value,” he said. One of the foremost purposes of the movie was to reawaken civic responsibility in every Nigerian, with the aim of effacing the mentality that the action of a single person does not hold much value.

Ahead of the movie premiere, Omorogbe had expressed delight at finally being able to tell a true life incident with added fictional inputs but majorly showing the power of every single Nigerian. The movie stems from a long story which has already been told before 2Baba supported the people to join a protest and this spurred different occurrences in a matter of few days. The story basically is to tell and show Nigerian youths and the general public that if they believe in their power, they can always get the desired change because everything starts with the Power of 1.

According to Tuface Idibia, the movie is his effort to impact the country. This is to ensure that it moves from a third world country. He, however, added that the movie aims at impacting the society, to a point where citizens will be proud of their country.

The pulsating political drama captures a nerve-racking sequence of events that ensued when a pop superstar raises his voice to demand answers to the questions bugging millions of his fellow countrymen. Things spiral dangerously out of control as neither he nor the authorities seem ready for the explosive fall out. Shot in locations around Lagos State, ‘Power of 1’ is aimed at preaching the power in the strength of just one individual.

‘Power of 1’ is the story of a legendary musician. Early last year, 2Baba was set to lead a revolt against the Nigerian government, as he felt that they had failed by leading the country into an economic crisis. As news of his planned march gathered momentum, attempts were made to politicise it and scared that it could lose its credibility with severe consequences for him, the singer withdrew from the protest in a broadcast that instantly went viral and he was subsequently labelled a coward.

Although this protest never happened, it, however, inspired the Power of 1 movie. According to Omorogbe, “the movie ‘Power of 1’ has in it some of the things 2baba went through.

The movie is a mix of fiction and real-life events and when you read the synopsis, you don’t see it all until you get to watch the movie.

The trailer is a proverbial tip of the iceberg because the film itself is on a whole different level.”

Omorogbe said it all began with 2baba foundation in 2011. “I work with the 2Baba foundation and we started in 2011 to get into the political space and by 2014, we had some organisations joined us and we launched ‘Vote not Fight’ and the reason was simple,” he explained. “There were so many predictions about 2015 to be violent and we sat and said, yes there might be these predictions but what can we do to stop or reduce it to the barest minimum and we designed a campaign called ‘Vote not Fight, Election no be war’ and we engaged youths for months on end.

“We went from place to place using 2baba’s star power and resources of these other organisations to engage young people and showing them clearly reasons why violence is not an option for 2015 election and by the time it was the election, we had covered over 744 local governments and the election was relatively peaceful.

This made it clear that we could get it done. So, we’ve been working on sensitising the youths making them understand why their votes count and why they need to make it count by a singular decision.

“And in January 24, 2017, 2Baba posted something on Instagram supporting the cries of the masses and it was like matches and petrol and we saw drama unfolding before our very eyes, it was very close to something we might not be able to handle so he pulled the plug to primarily douse the tension and reduce the possibility of violence where people will get hurt…”

The Power of 1 confronts head-on issues plaguing the nation today ranging from corruption, unemployment, terrorism, ostentatious lifestyle against a backdrop of crippling poverty and exposes the despondency of the Nigerian youth in a society where their votes no longer matter.