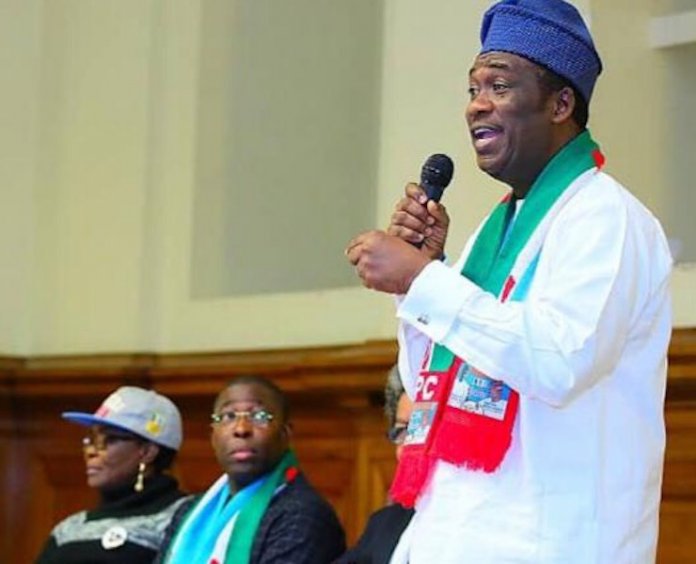 It’s a New Year. Big thanks to God for making it possible for us to witness this brand New Year.

Despite all the colourful events and gloomy predictions that preceded the New Year, many of us have come out stronger and ready to soar higher like the mythical Phoenix in 2019.

As such, not a few Nigerians are charged with a renewed assurance that better days are ahead particularly about the governance of their country that has tremendous impact on the well-being and daily activities of all and sundry.

Notably, this sense of assurance amongst many people of Lagos, Nigeria’s commercial nerve centre, is on a higher level and almost contagious. And the reason is not far-fetched.

The emergence of the two of their illustrious and tested brains, Mr. Babajide Sanwo-Olu and Dr. Obafemi Hamzat, as candidates for the office of governor and deputy in the state has become a potent harbinger of this palpable optimism.

Indeed, that assurance, or hope as popularly used by Nigerians, is the only magic word that keeps fueling our strength, resolve and trust that sooner than later Nigeria will enthrone, across its regions and states, leaders that are genuinely concerned about public service.

Interestingly, for Nigerians as a whole, the year 2019 will commence with the general elections, a once-in-four-years exercise for the people to choose the leaders that will manage their affairs in all the constitutionally established elective positions across the country.

This is indeed another defining moment for all. A moment to choose between public-service devotees and self-serving characters. An opportunity to pick between protectors of public patrimony and pilferers of public assets and between committed individuals that will help uplift the living standards of the people and the insensitive lot that will overlook the appalling living conditions of the masses.

Lagos has continued to serve as the model in good governance amongst other states in Nigeria because of the quality of leadership that the state has had all along to manage its affairs.
However, as once posited by yours truly, the state’s aspiration for a “Mega and Smart” city means that its advancement will no longer be measured alongside other sub-national governments in Nigeria but within the international space and along with cities in advanced countries of the world with similar or greater development aspirations.

Right now, it seems to all eyes that victory at the coming governorship election in Lagos State for the candidate of the All Progressives Congress (APC) in Lagos State, Mr. Babajide Sanwo-Olu and his running mate, Dr. Obafemi Hamzat, is absolutely a given.

This is because, from all indications, the major opposition in the state and other contestants for the governorship have so far remained on curious hibernation.
Interestingly, the evident lethargy on the part of their competitors have not made Sanwo-Olu and Hamzat, at any moment, cease to drive their campaigns to get more voters behind them at the poll for an overwhelming upset.

So, crucial on the agenda of this pair, in their preparation to take over the leadership of Nigeria’s commercial city, is the need to attract sufficient Foreign Direct Investment (FDI) and other essential offshore benefits to Lagos in order to significantly increase the State’s revenue base and effectively drive Sanwo-Olu’s vision for a greater Lagos.

During their engagements with various critical stakeholders in the affairs of Lagos State, Sanwo-Olu and Hamzat have expressed profound commitment towards finding solutions to the distressing regular traffic gridlocks on Lagos roads, the condition of the health care system, state of infrastructure and standard of education in the State amongst other necessities.

Hamzat’s recent visit to the City of London in United Kingdom (UK) was part of the efforts to achieve the foregoing and embark on the serious activities of governance after election.

Being a running mate and prospective deputy governor who is competent to undertake official duties for his principal whenever the need arises, Hamzat conducted and delivered his London assignments with the passion and believability that visionary leaders are noted for.

Aside the vigorous projection of their campaign’s five Pillars of Development, namely, Traffic Management & Transportation, Health & Environment, Education & Technology, Making Lagos a 21st century economy, Entertainment & Tourism which are called THEME for ease of retention, to an assemblage of foreign investors including Nigerians who are residing in the UK, Hamzat emphasised the peril of brain drain to Nigeria and the determination of their government, when elected, to help prevent the dangerous exodus of experts from Nigeria and attract more Nigerians with relevant expertise from abroad to join hands to build a better and greater.

Expectedly, as a forward-thinking administrator with records of great achievements during his term as a commissioner in Lagos State, Hamzat couldn’t conceal his admiration for the effective transportation system in London and professionally-run public health services in the UK.

Hamzat, giving Sanwo-Olu all the necessary support, has enormous confidence that they will make tremendous contribution to governance and improve the standards of public institutions to a level that perfectly fits global benchmarks of excellence in public service. So, for Lagosians, good days are indeed around the corner.