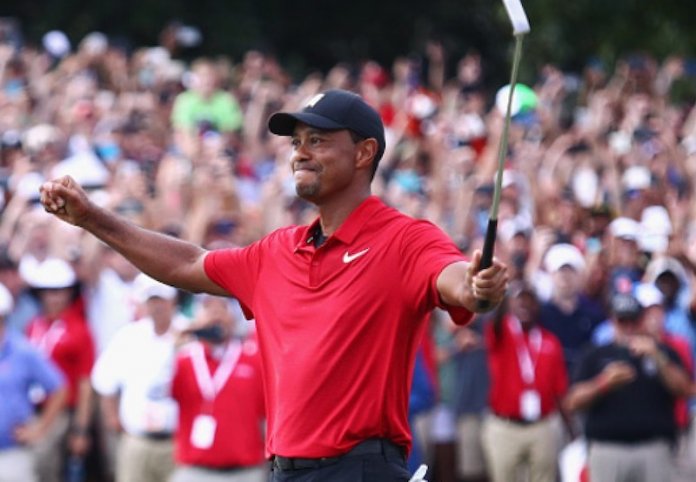 Without any dispute, Tiger Woods magical 80th victory on the PGA Tour was the stand out highlight in the year 2018.

The influx of ecstatic fans into fairway and the playing area at East Lake Golf Club, Atlanta, on the final day of the Tour Championship as Woods made his way to the 18th green, defined the year and remains a memory that will not simply melt away.

It was a moment in history. It was Woods’ first win since the WGC-Bridgestone Invitational in 2013, an interlude of 1,876 days, playing in 41 PGA Tour events without a win.

The 14-time Major winner, grossed 11 under par to beat Billy Horschel by two strokes to log his milestone on the PGA Tour. The electrifying win put him just within reach of matching Sam Snead’s all-time record of 82 wins for most victories on the tour.

But what made it more spectacular was that it came as a huge rebound for a player whom many had written off, considering his injury profile and domestic lifestyle that had ebbed into a tailspin.

Tiger is walking miracle and it is a surprise that he is still competing at the highest level factoring the injuries that limited his performances and caused him to missing key tournaments since 2008.

He is playing with a fused lower spine and has five back surgeries to repair a ruptured anterior cruciate ligament in his kneel, a micro- discectomy to remove a disc fragment that was pinching his nerve and series of operations to correct spasms on his stiff neck.

We saw signs of his progression early last year after revving off his year in January 2018 at the Farmers Open, where he made the cut and finished in tied for 23rd.A month later, he missed the cut at the Genesis Open, but rebounded with a solid 12-place finish at the Honda Classic in Florida.

The hype machine started again when he finished tied for second, one shot behind Paul Casey at the Valspar at Copperhead Course at Innisbrook Resort and Golf Club in Palm Harbor, northwest of Tampa.

In March, he finished in T5, eight shots behind Rory McIlroy at the Arnold Palmer Invitational in Bay Hill. And after failing to sparkle at the Masters, where he finished 23rd and the US Open at Shinnecock Hill, where he missed the cut, Woods tied for fourth at the Quicken Loans, and three weeks later, he took the solo lead on Sunday at the Open Championship at Carnoustie, only to fade on the back nine and finish in T6.

But his biggest outing preceding the Tour Championship was at PGA Championship at Bellerive where he shot a 64, his career-best on a major-championship Sunday, which wasn’t enough to catch Brooks Koepka, who shot 66 to clip by Tiger by two shots.

The biggest story in Nigeria in December 2018 was the historic accomplishment of Nigeria’s starlet, Georgina Oboh, who finally fulfilled her desire to become a member of the Ladies European Tour (LET). Her qualification also made her the first Nigerian professional golfer on the world circuit, regardless of the gender.

Oboh made the final list of 60 players and ties at the Lalla Aicha Qualifying School held in Marrakesh, Morocco from December 16-20.

The qualification will accord her with playing privileges for the 2019 season.

The 17-year- old golfer, who cut her teeth at Ikoyi Club 1938, was the youngest African to qualify for the LET School. She was also the youngest player in the Pre- Q School A.

Playing at the main Q-School at Amelkis Golf Club, she grossed 78,73, 70 and 72 over four days to make the cut and qualify to play at the elite level.

“I am happy my dream of starting my career on the European Tour has become a reality. This will surely give me the opportunity to play with the best golfers in the world. I thank God and I am grateful to my family and supporters for their prayers and encouragement since I started this journey,” Oboh, whose parents are both golfers remarked.

Before the grilling test in Marrakesh, Oboh won the Cote d’Ivoire Open in Abidjan, at the expense of Senegal’s Oumy Dieye, Madagascar’s Leslie Grandet and a bunch of other lady professionals from Côte d’Ivoire by three shots.

Oboh is a former winner of US Kids Golf Teen World Championship.

US Suffers another Ryder Cup Meltdown

Leading 10-6 going into the 12 singles matches, there were some nervous moments on an exciting afternoon as the Americans occasionally threatened a comeback.

But with Ian Pouter taking the total to 13½ with victory over world No. 1 Dustin Johnson and Francesco Molinari, Sergio Garcia and Henrik Stenson all assured of at least a half, the European team could begin to celebrate.

Defeat means the US’ long run of failure on European soil in the biennial team competition goes on. The last time they won away was in 1993.

The loss is also their second biggest loss in history to Europe, which now has won nine of the last 12 times.

Molinari, Garcia and Stenson eventually all won, with the Italian being the first European to win all five matches in a single competition.

A fatigued former world No 1, Tiger Woods, who ended an amazing injury return with the Tour Championship the previous week, was beaten 2 and 1 by Spaniard Jon Rahm to lose all his four matches.

The three dormie games meant victory was secure but Ryder Cup tradition demands a man who “delivers” the winning point and nobody has delivered like Molinari this week.

After seeing his ball splash into the lake, Mickelson, suffering two defeats in what will surely be his last appearance, sportingly removed his cap and offered his hand to spark amazing scenes of celebration on the tee and amid the biggest galleries in the event’s history.

“This means more than majors, more than anything,” said Molinari, who won all four pairs matches with Tommy Fleetwood in another European first.

“The team spirit has been the best I have been a part of, it’s just been an incredible week.”

Moments later Garcia beat Rickie Fowler 2&1 to become the competition’s all-time leading scorer, his three points this week taking his career tally to 25½ and overhauling Nick Faldo and fully justifying Bjorn’s decision to select him as a wild card.

Stenson duly handed Bubba Watson his fourth defeat in four singles matches, by a thumping 5&4, with only Patrick Reed halting the cascade of blue by beating Tyrrell Hatton.

Andrew Oche Odoh emerged the official leader of the PGA Nigeria Order of Merit after amassing N1, 450, 800 in a season defined by glut of tournaments.

Odoh, lived to his reputation as the country’s top professional player by topping the chart in spite of playing just only three tournaments.

Victory at the Kaduna Investment Open took him to the top of the chart ahead of Sunday Olapade, who trailed in second position without a victory in any of the official events.

Christopher got a lift on the table with his solo win at Jigawa Governor’s Cup, edging both Ayuba Izang and Sunday Okpe into a tied for second.

Izang, who notably won the Plateau Governor’s Cup placed fourth. He won N864,000 at Rayfield Golf Club and tied for second At Jigawa and similarly tied for 17th David Mark tournament in Otukpo.

In fifth position is Martin Odoh while the ageless Emos Koblah is in sixth place. The Ghanaian, the winner of Radix Classic, flourished on the table courtesy of decent performance at Kadvest Open and David Mark tournament.

The other players in the top 10 are Mike Ubi in seventh; Kamilu Bako, eighth; Sunday Odegha in ninth and Francis Onuh, in 10th place