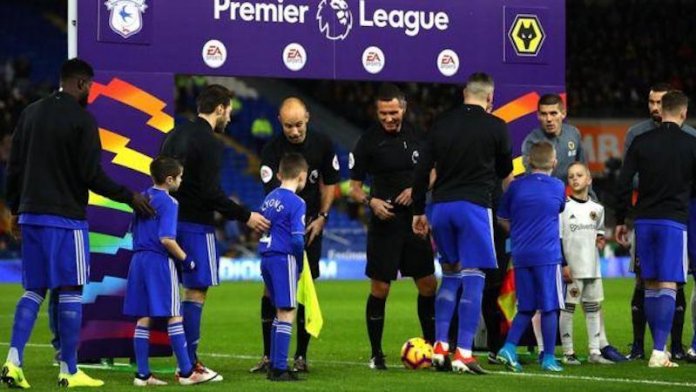 Former English Premiership side, Swansea City yesterday received a flack from pundits following the revelation that the club charges ‘outrageous’ fee from willing parents that wanted their children to be mascots on match day.

It costs up to £478 for a match-day mascot “package” at the Championship club, research by BBC Wales found.

Only three teams in the Premier League charge more, while the experience is free at most of the top clubs. Cardiff City charge £255.

Consumer groups have branded the higher prices as “outrageous”.

For many youngsters, the chance to walk out onto the pitch with their football heroes is a dream come true.

Indeed many clubs tell parents the package is the “ultimate gift your child will never forget”.

Yet while many of the biggest clubs in the country, including Premier League champions Manchester City, do not charge for the opportunity, others are cashing in more than £700 per child.

Most packages include full kit, match tickets, photographs and autographs as well as walking onto the pitch before kick-off.

But a £270 deal at Fulham does not include kit while a £185 package at Bournemouth does not come with a ticket to the game.

Martyn James, of consumer website Resolver, said: “It’s absolutely outrageous that some richer kids can effectively buy their way to the top of the mascot list.

“When I was younger, being a mascot was a reward for super loyalty or for having been through a great deal.

“Charging any money for these packages is unacceptable – and it’s pretty unknown too.

“It makes a mockery of all the things that our national game is supposed to represent.”

Supporters on fan forums have slammed the prices as “unfair” and “scandalous”.

Swansea City said the “truly once in a lifetime experience” includes four hospitality places, a meal and half-time penalty competition on the pitch.

“We also give one space free to charity every match and this was brought in this season.”

Mascots at the likes of Chelsea, Liverpool, Arsenal and Manchester United are picked at random from their junior fan club and are free.

Cardiff City offer the chance for children aged between four and 10 to turn “dream into reality” for £255 and have sold out for many of their most popular home fixtures.

Claire Blake, of Penarth, arranged for her eight-year-old son Cian to be a mascot before the Bluebirds’ game against champions Manchester City as a birthday gift in September.

“We were lucky to get such a big game but I’m not sure we would be happy paying the same amount for games against other teams,” she said.

“Cian got a kit, signed photos and met Neil Warnock and had a great time, but the seats were poor and it was a bit rushed meeting the players.”

Season-ticket holder Tracy Morgan paid for her eight-year-old son Leo to be a mascot.

She said: “It was very expensive but it was worth every penny to see my son’s face – and my husband’s.”

Ryan Moore bought a mascot package as a Christmas gift for his six-year-old son Niall.

He said: “It’s free for some big clubs like Liverpool but a money-making scheme at others and there are so many mascots that it dilutes the experience.

“But we were pretty happy with the whole day. Niall loved it – apart from the team being hammered 4-1.”